Peterbilt 280 With Fruehauf Tanker Trailer From The Movie Duel 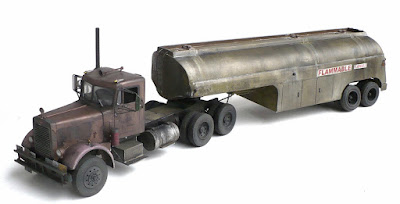 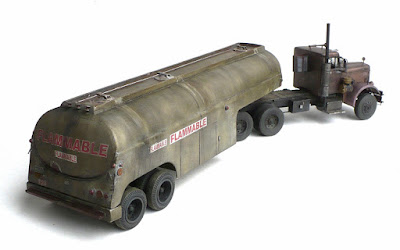 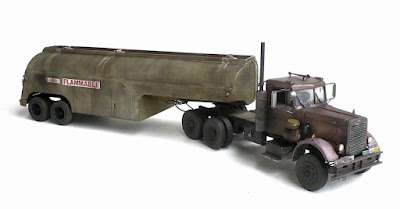 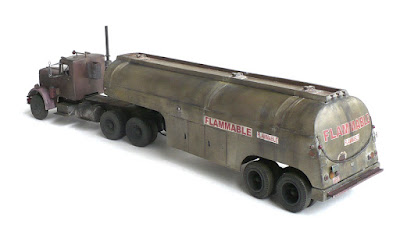 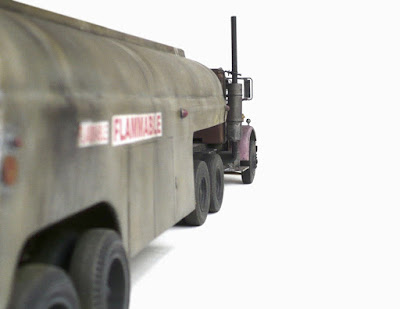 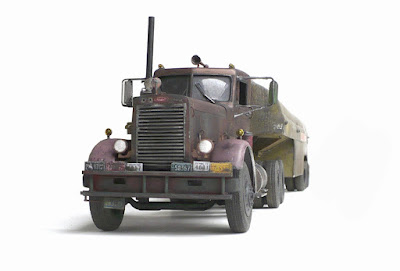 Here are some images of Revell/IMC/AITruck Models/Scratch/Kitbash 1/25 scale Peterbilt 280 With Fruehauf Tanker Trailer From The Movie Duel (1971).
Other Than a lot of Scratch and Kitbash work, the kits used were Revell's Peterbilt 359 Conventional Tractor. IMC's Big Rig Tanker Trailer and of course American Industrial Truck Model's 351/280 Peterbilt conversion kit.

From Wikipedia"
Duel is a 1971 television (and later full-length theatrical) thriller film directed by Steven Spielberg in his full-length film directing debut and written by Richard Matheson, based on Matheson's short story of the same name. It stars Dennis Weaver as a terrified motorist stalked on a remote and lonely road by the mostly unseen driver of a mysterious tanker truck.

The script is adapted by Richard Matheson from his own short story, originally published in Playboy magazine. It was inspired by a real-life experience in which Matheson was tailgated by a trucker while on his way home from a golfing match with friend Jerry Sohl on November 22, 1963, the same day as the John F. Kennedy assassination. The short story was given to Spielberg by his secretary, who reportedly read the magazine for the stories.
Duel was Spielberg's second feature-length directing effort, after his 1971 The Name of the Game NBC television series episode "L.A. 2017". It was two years after directing a segment of the pilot for the anthology television series Night Gallery and several other TV episodes. Duel was initially shown on American television as an ABC Movie of the Week installment. It was eventually released to cinemas in Europe and Australia; it had a limited cinema release to some venues in the United States, while it was widely praised in the UK. The film's success enabled Spielberg to establish himself as a film director.
Much of the movie was filmed in and around the communities of Canyon Country, Agua Dulce, and Acton, California. In particular, sequences were filmed on Sierra Highway, Agua Dulce Canyon Road, Soledad Canyon Road, and Angeles Forest Highway. Many of the landmarks from Duel still exist today, including the tunnel, the railroad crossing, and Chuck's Café, where Mann stops for a break. The building is still on Sierra Highway and has housed a French restaurant called Le Chene since 1980.The "Snakerama" gas station seen in the film appears in Spielberg's comedy film 1941 (1979) as an homage to Duel, with Lucille Benson again appearing as the proprietor.
Production of the television film was overseen by ABC's director of movies of the week Lillian Gallo. The original made-for-television version was 74 minutes long and its filming was completed in 13 days (three longer than the scheduled 10 days), leaving 10 days for editing prior to broadcast as the ABC Movie of the Week. Following Duel's successful TV airing, Universal released the film overseas in 1972. The TV movie was not long enough for theatrical release, so Universal had Spielberg spend two days filming several new scenes, turning Duel into a 90-minute film. The new scenes were set at the railroad crossing, school bus, and the telephone booth. A longer opening sequence was added with the car backing out of a garage and driving through the city. Expletives were also added, to make the film sound less like a television production.
Spielberg lobbied to have Dennis Weaver in the starring role because he admired Weaver's work in Orson Welles' Touch of Evil. Weaver repeats one of his lines from the Welles classic, telling the truck driver in the cafe that he has "another think coming." Interestingly, this phrase is commonly misstated as "another thing coming", as Weaver's character did in Touch of Evil.
In the Archive of American Television website, Spielberg is quoted in an interview given by Weaver as saying: "You know, I watch that movie at least twice a year to remember what I did".

The car was carefully chosen, a red Plymouth Valiant, although three cars were used in the filming.] The original release featured a 1970 model with a 318 V-8 engine and "Plymouth" spelled out in block letters across the hood, as well as trunk lid treatment characteristic of the 1970 model; a 1971 model with a 225 Slant Six was also used. When the film was released in theatres and scenes were added, a 1972 model with a 225 Slant Six was added, with the "Plymouth" name on the hood as one emblem. All three cars were dressed with wheel covers available only to Valiant models, only in 1971.
The Valiant's red color was also intentional; Spielberg did not care what kind of car was used in the film, but wanted it to be red to enable the vehicle to stand out in the wide shots of the desert highway.

Spielberg had what he called an "audition" for the truck, wherein he viewed a series of trucks to choose the one for the film. He selected the older 1955 Peterbilt 281 over the current flat-nosed "cab-over" style of trucks because the long hood of the Peterbilt, its split windshield, and its round headlights gave it more of a "face", adding to its menacing personality. Additionally, Spielberg said that the multiple license plates on the front bumper of the Peterbilt subtly suggested that the truck driver is a serial killer, having "run down other drivers in other states". For each shot, several people were tasked to make it uglier, adding some "truck make-up". The shots of the truck are done in such a way as to make it seem "alive" in terms of its attack on Mann.
The truck had twin rear axles, a Cummins NTC 350 turbocharged engine with a 5-speed main transmission, and a 3-speed auxiliary transmission, making it capable of hauling loads over 30 tons and top speeds reaching 75–80 mph. During the original filming, the crew only had one truck, so the final scene of the truck falling off the cliff had to be completed in one take. For the film's theatrical release, though, additional trucks were purchased in order to film the additional scenes that were not in the original made-for-television version (the school bus scene and the railroad crossing scene). Only one of those trucks has survived.
Stock footage of both vehicles was later used in an episode of the television series The Incredible Hulk, titled "Never Give a Trucker an Even Break". Spielberg was not happy about this, but the usage was legal, as the show was produced by Universal and the Duel contract said nothing about reusing the footage in other Universal productions.
The truck was purchased several times. It is currently owned by a truck collector and is on display at Brad's Trucks in North Carolina.
Posted by -Warren Zoell at 1:00 PM

Thanks Manchu. It's a great movie.

Amazing, excellent work. The movie Duel is one of my all time favourites, and dearly would like to have a model of the Peterbilt 281. I wish I had your skills to make this.

Thank Mathieu! It's one of my favorites as well.

Congratulations Dwayne for leaving your first comment on this site.

I have been pining for a good model of this truck since I was 13. 33 years,man. Would you or anyone you know be interested in undertaking a build on consignment? It would be a dream come true for me.

Would you or anyone you know be interested in undertaking a build on consignment of this truck? I have been pining for this rig for 33 years.

I can build you one but you would have to provide the model kits necessary for its construction as a show of commitment on your part.
The kits you'll need to get are Lindberg's Dodge L700 & Tanker Trailer (one kit) (if you can find the old IMC Big Rig tanker trailer kit you may save a few bucks). You'll also need the AMT Peterbilt 359 California Hauler and the American Industrial Truck Models Peterbilt 280/351 conversion kit. https://aitruckmodels.com/product/1959-peterbilt-351-280/
The cost to build the model is $650 plus shipping costs.
If you're interested you can contact me at wz2001@shaw.ca


Hello. Is the model 1:25 scale? What is the duration of such a model? I'm interested in the playmouth vailant set. same scale. best regards.

Yes it's 1/25 scale. But as for how long it took. I had to build this for a movie so I had to go like a bat out Hell. Even at that it took two weeks.