The Space Ark from "When Worlds Collide" 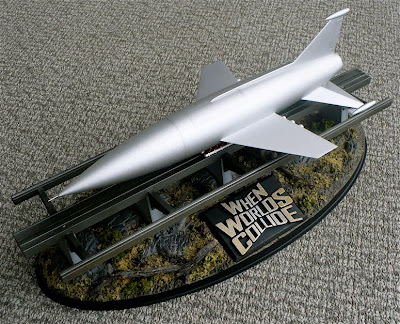 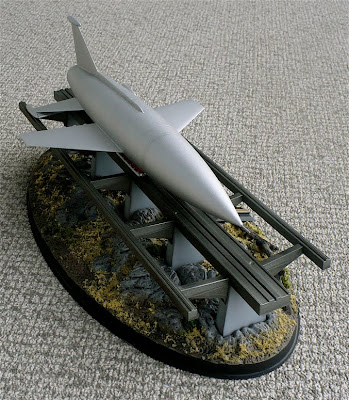 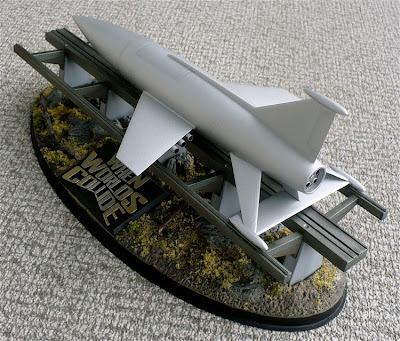 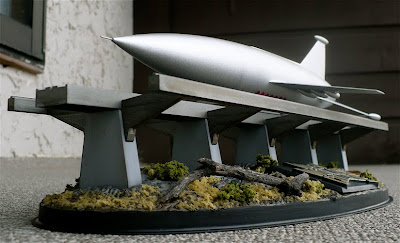 Here are some images of Pegasus Hobbie's 1/350 scale Space Ark from the 1951 movie "When Worlds Collide".

When Worlds Collide is a 1951 science fiction film based on the 1933 novel co-written by Philip Gordon Wylie and Edwin Balmer. The film was shot in Technicolor, directed by Rudolph Maté and was the winner of the 1951 Academy Award for special effects.[1]

Producer George Pal considered making a sequel based on the novel After Worlds Collide, but the box office failure of his 1955 Conquest of Space made it impossible.

Hendron warns the delegates of the United Nations that the end of the world is little more than eight months away. He pleads for the construction of spaceships to transport a lucky few to Zyra, a planet in orbit around Bellus that will pass very close to the Earth, in the faint hope that it can sustain life and save the human race from extinction. However, other, equally-distinguished scientists scoff at his claims, and he is not believed. With no help from the United Nations or the United States government, Hendron receives help from wealthy humanitarian friends, who arrange a lease on a former proving ground to construct a spaceship. To finance the construction, Hendron's group is forced to turn to self-centered, wheelchair-bound industrialist Sidney Stanton (John Hoyt). Stanton demands the right to select the passengers, but Hendron insists that he is not qualfied to make those choices and that all his money can buy is a single seat on the ark.

Joyce becomes attracted to Randall and prods her father into finding reasons to keep him around, much to the annoyance of her boyfriend, medical doctor Tony Drake (Peter Hansen). The ship's construction is a race against time. Groups in other nations also begin building ships. Formerly-skeptical scientists admit that Hendron is right and governments prepare for the inevitable. Martial law is declared and residents in coastal regions are moved to inland cities.

Zyra first makes a close approach, its gravitational attraction causing massive earthquakes, volcanic eruptions, and tidal waves that wreak havoc. Several people are killed at the construction camp, including Dr. Bronson. In the aftermath, Drake and Randall travel by helicopter to provide assistance to survivors. When Randall alights to rescue a little boy, Drake has to resist a strong temptation to strand him.

As the day of doom approaches, the ship is loaded with food, medicine, microfiche copies of books, equipment, and animals. Finally, most of the passengers are selected by lottery, though Hendron reserves seats for a handful of people: himself, Stanton, Joyce, Drake, pilot Dr. George Fry (Alden Chase), the young boy who was rescued, and Randall, for his daughter's sake. When a young man turns in his winning ticket because his girl was not selected, Hendron arranges for both to go. Randall refuses his seat and only pretends to participate in the lottery, believing that he has no useful skills. For Joyce's sake, Drake fabricates a "heart condition" for Fry, making a backup pilot necessary. Randall is the obvious choice.

The cynical Stanton becomes increasingly anxious as time passes. Knowing human nature, he fears what the desperate lottery losers might do. As a precaution, he has stockpiled weapons. Stanton's suspicions prove to be well-founded. His much-abused assistant, Ferris (Frank Cady), tries to get himself included in the crew at gunpoint, only to be shot dead by Stanton. During the final night, the selected passengers and animals are quietly moved to the launch pad to protect them from any more violence.

Shortly before takeoff, many of the lottery losers riot, taking up Stanton's weapons to try to force their way aboard. Hendron stays behind at the last moment, forcibly keeping the crippled Stanton and his wheelchair from boarding, in order to lighten the spaceship. With an effort born of desperation, Stanton stands up and starts walking in a futile attempt to board the ship before it takes off.

From space, the ship's television monitor shows Earth's collision with Bellus. Hendron's sacrifice proves to be crucial, as the fuel runs out too soon and Randall glides the ship to an unpowered rough landing on Zyra. The passengers debark and find the planet to be habitable. Remains of an alien civilization are visible in the distance. David Randall and Joyce Hendron walk hand-in-hand to explore their new home.

I love these classic sci-fi kits, and you did a nice smooth job on this too. Are the logs on the base part of the kit, or did you add those from what I imagine is a plentiful supply of local sticks and twigs?

No I added the grass and twigs myself.

Hendron warns the delegates of the United Nations that the end of the world is little more than eight months away. He pleads for the construction of spaceships to transport a lucky few to Zyra, Maritime Security Companies