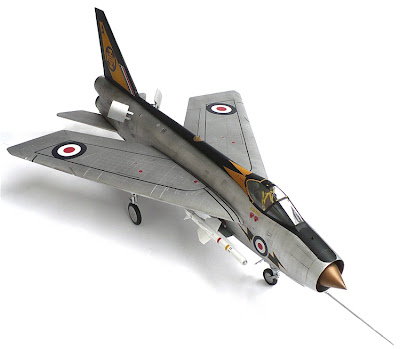 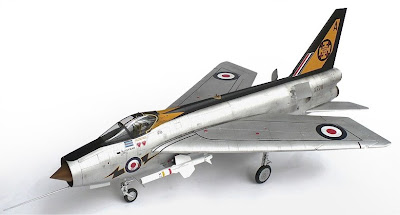 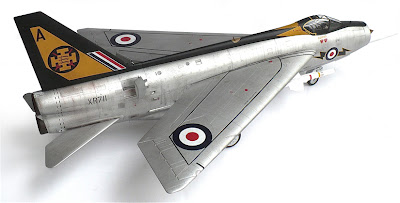 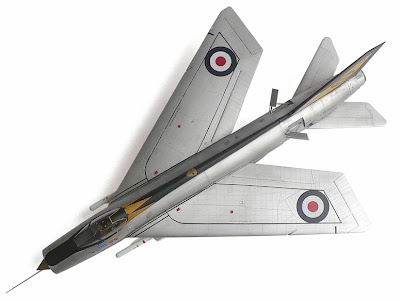 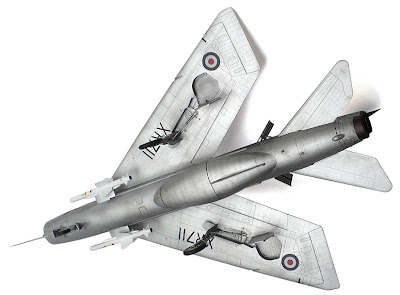 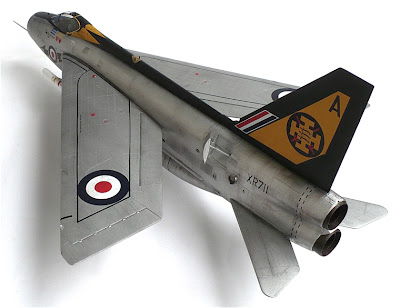 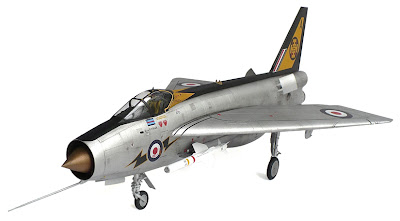 From Wikipedia"
The English Electric Lightning is a supersonic jet fighter aircraft of the Cold War era, noted for its great speed. It is the only all-British Mach 2 fighter aircraft and was the first aircraft in the world capable of supercruise. The Lightning was renowned for its capabilities as an interceptor; pilots commonly described it as "being saddled to a skyrocket". Following English Electric's integration into the unified British Aircraft Corporation, the aircraft was marketed as the BAC Lightning.
The Lightning was prominently used by the Royal Air Force RAF and the Royal Saudi Air Force. The aircraft was a regular performer at airshows, it is one of the highest-performance aircraft ever used in formation aerobatics.[citation needed] Following retirement in the late 1980s, many of the remaining aircraft became museum exhibits; until 2010, three examples were kept flying at "Thunder City" in Cape Town, South Africa. In September 2008, the Institution of Mechanical Engineers conferred on the Lightning its "Engineering Heritage Award" at a ceremony at BAE Systems' site at Warton Aerodrome.
The first operational Lightning, designated the F.1, was designed as a point defence interceptor to defend mainland Britain from bomber attack. To best perform this intercept mission, emphasis was placed on rate-of-climb, acceleration, and speed, rather than range and combat endurance. It was equipped with two 30 mm ADEN cannon in front of the cockpit windscreen and an interchangeable fuselage weapon pack containing either an additional two ADEN cannon, 48, two inch air-to-air rockets, or two de Havilland Firestreak air-to-air missiles, a heavy fit optimized for attack of large aircraft. The Ferranti AI.23 radar (immediate predecessor of the AI.24 Foxhunter) supported autonomous search, automatic target tracking, and ranging for all weapons, while the pilot attack sight provided gyroscopically derived lead angle and backup stadiametric ranging for gun firing. The radar and gunsight were collectively designated the AIRPASS: Airborne Interception Radar and Pilot Attack Sight System.
The next two Lightning variants, the F.1A and F.2, saw steady but relatively minor refinement of the basic design, and the next variant, the F.3, was a major departure. The F.3 had higher thrust Avon 301R engines, a larger, squared-off fin and strengthened intake bullet allowing a service clearance to Mach 2.0 (the F.1, F.1A and F.2 were limited to Mach 1.7), the A.I.23B radar and Red Top missile offering a limited forward hemisphere attack capability—and most notoriously—deletion of the nose cannon. The new engines and fin made the F.3 the highest performance Lightning yet, but with an even higher fuel consumption and resulting shorter range. The next variant, the F.6, was already in development, but there was a need for an interim solution to partially address the F.3’s shortcomings. The F.3A was that interim solution.
The F.3A introduced two improvements: a new, non-jettisonable, 610 gal (2,770 l) ventral fuel tank, and a new, kinked, conically cambered wing leading edge, incorporating a slightly larger leading edge fuel tank, raising the total usable internal fuel to 716 gal (3,250 l). The conically cambered wing noticeably improved maneuverability, especially at higher altitudes, and the ventral tank nearly doubled available fuel. The increased fuel was very welcome, but the lack of cannon armament was felt to be a deficiency. It was thought that cannon were desirable to fire warning shots in the intercept mission.
The F.6 was the ultimate Lightning version to see British service. Originally, it was nearly identical to the F.3A with the exception that it had provisions to carry 260 gal (1,180 l) ferry tanks on pylons over the wings. These tanks were jettisonable in an emergency, and gave the F.6 a substantially improved deployment capability. There remained one glaring shortcoming: the lack of cannon. This was finally rectified in the form of a modified ventral tank with two ADEN cannon mounted in the front. The addition of the cannon and their ammunition decreased the tank's fuel capacity from 610 gal to 535 gal (2,430 l), but the cannon made the F.6 a “real fighter” again.
The final British Lightning was the F.2A. This was an F.2 upgraded with the cambered wing, the squared fin, and the 610 gal ventral. The F.2A retained the A.I.23 and Firestreak missile, the nose cannon, and the earlier Avon 211R engines. Although the F.2A lacked the thrust of the later Lightnings, it had the longest tactical range of all Lightning variants, and was used for low-altitude interception over Germany.
There were several unique and distinctive features in the design of the Lightning; principally the use of stacked and staggered engines, a notched delta wing, and a low-mounted tailplane. The vertically stacked, longitudinally staggered engines was the solution devised by Petter to the conflicting requirements of minimizing frontal area, providing undisturbed engine airflow across a wide speed range, and packaging two engines to provide sufficient thrust to meet performance goals. The configuration allowed the twin engines to be fed by a single nose inlet, with the flow split vertically aft of the cockpit, and the nozzles tightly stacked, effectively tucking one engine behind the cockpit. The result was a low frontal area, an efficient inlet, and excellent single-engine handling. Unfortunately, this stacked configuration led to complicated maintenance procedure, and the recurring problem of fluid leakage from the upper engine being a fire hazard. Lightning XM215 at Farnborough Air Show, England, in 1964
The fuselage was tightly packed, leaving no room for fuel tankage or main landing gear. While the notched delta wing lacked the volume of a standard delta wing, each wing contained a fairly conventional three-section main fuel tank and leading-edge tank, holding 312 imp gal (1,420 l); the wing flap also contained a 33 imp gal (150 l) fuel tank and an additional 5 imp gal (23 l) was contained in a fuel recuperator, bringing the aircraft's total internal fuel capacity to 700 imp gal (3,200 l). The main landing gear was sandwiched outboard of the main tanks and aft of the leading edge tanks, with the flap fuel tanks behind. The long main gear legs retracted toward the wingtip, necessitating an exceptionally thin main tyre inflated to the high pressure of 330–350 psi (23–24 bar).
A conformal ventral store was added to the design to house, alternatively, a fuel tank or a rocket engine. The rocket engine, a Napier Double Scorpion motor, also contained a reserve of 200 imp gal (910 l) of high-test peroxide (HTP) to drive the rocket’s turbopump and act as an oxidizer. Fuel for the rocket would have been drawn from the Lightning’s internal tankage. The rocket engine was intended to boost the Lightning’s performance against a supersonic, high altitude bomber threat, but this threat never emerged, thus the Lightning’s basic performance was deemed sufficient and the rocket engine option was cancelled in 1958. The ventral store saw wide use as an extra fuel tank, initially this was jettisonable and held 250 gal (247 gal usable, 1,120 l). Later ventral tanks were non-jettisonable.
Despite its acceleration, altitude and top speed, the Lightning found itself outclassed by newer fighters in terms of radar, avionics, weapons load, range, and air-to-air capability. More of a problem was the obsolete avionics and weapons fit. The radar had a short range and no track-while scan capability; it could only detect targets in a fairly narrow (40 degree) arc. While an automatic collision course attack system was developed and successfully demonstrated by English Electric, it was not adopted owing to cost concerns. Plans to supplement or replace the obsolete Red Top and Firestreak missiles with modern AIM-9L Sidewinder missiles never came to fruition because of lack of funding,
Posted by -Warren Zoell at 4:09 PM

This is great! I love the early jet fighters.

So do I. They're big bulky beasts.

It is a good size.