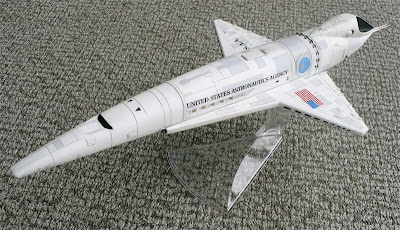 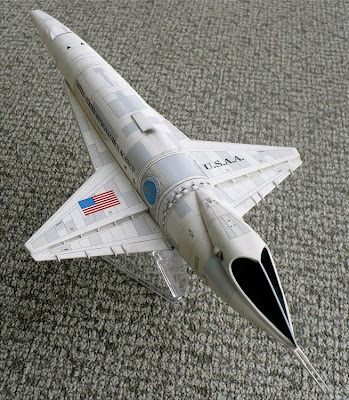 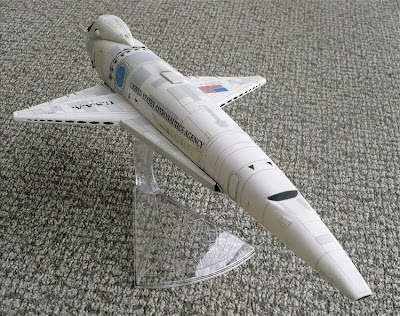 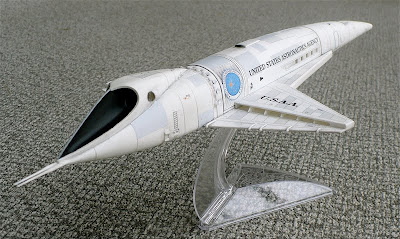 Here are some images of Moebius Models 1/160 scale Space Clipper (Orion III) from 2001 a space odyssey.

Apart from from the U.S.A.A. decals and some extra panelling I built this model straight out of the box.
It has been said that this is the most accurate Space Clipper kit yet produced and apart from the missing rising in front and above the windscreen I would tend to agree however I do have a few complaints about the kit itself.

1: Apart from the panel decals this kit does not come with any other decals. So if you want to use for example the Pan Am markings as from the movie I'm afraid you will either have to buy them after market somewhere or make them yourself. There are plenty of Pan Am logo images off the interweb that one could use. Why they never supplied them with the kit is anyone's guess. I suspect Lawyers.

2: The panel decals themselves are I believe too intense to provide a reasonable facsimile for the panelling squares portrayed on the original Clipper in the movie.
I didn't worry about this as I decided to build my Clipper to portray a U.S.A.A. craft so it's appearance would be merely subject for speculation anyway.
If you do decide to portray the Pan Am Clipper from the movie the only thing I could suggest is to scan the decal sheet into your computer lighten the image a bit and then print off a new set.

3: The panel decals are not entirely accurate as they are incomplete so as a result you may wish to do as I did and that's add more panels.

4: The instruction sheet is as I feel with most Moebius model kits are mediocre at best.

5: This kit was based off the now famous Aurora kit from 1969 and that kit had a lovely unique feature which was you could remove the back engine cowling to reveal a nuclear engine. Moebius for reasons best known to themselves have decided not to incorporate this feature into this new release. I mean they have the moulds and it really wouldn't have cost them anything to put it in I think. What's the problem?

All that being said however this kit does make a beautiful display piece and would be a proud addition to any model collection.

Here is some wonderful computer animation of an Orion III take off. Enjoy.

This looks neat and much better than the old Aurora I feel. My space clipper is by Airfix and it's based on the old Aurora as well.(the original reworked mold perhaps?) Unfortunately it lacks the engine as well.

I had the Airfix clipper at one time. I found that it had a too boxy look to it. Pick up the new Mobius one it's worth it.

Hi,
Would you allow me to include your images of the Space Clipper in my online store? Moebius did not provide any one.
I would credit you, of course.
Thanks,
www.transilvaniamodels.com
transilvaniamodels@yahoo.es

Lord Ruthwen- Of coarse you may. Go right ahead.

George,
Your review and animation really blew me away. I was a kid when 2001 premiered and always loved the Orion Shuttle. I blew up a couple of Aurora kits back then too! My buddies and I were all a bunch of junior pyros...
As an artist, I've portrayed this ship in JAL, Eastern, and TWA scheme. You can check them out on my blog at blogspot. Here's a link:
www.airlinerimages.blogspot.com

I just purchased the kit and look forward to start work on it. Not sure which scheme yet, but I'm thinking TWA as it has a globe by Loewy in the logo. Thanks again for a really interesting site giving the modeller some insight and eye-candy on this very COOL subject.

Thanks you Herb for visiting this site. I have one question though.
Who's George?
Love your site by the way.

Oh Sorry Warren. I got your name mixed up with a person named George Voudouris...the creator of the Clipper animation. Either way, it's great to see a new version of this model available and described in detail.

PS: Thanks for visiting my airliner art blog and kind compliment.
Btw: After seeing the animation of the Clipper on the ground, I've decided to retrofit landing gear.

I would use landing gear from a 1/144 scale Space Shuttle kit.

Ray - I just used blank decal sheet and painted them the appropriate colours,cut out the squares and put them on.