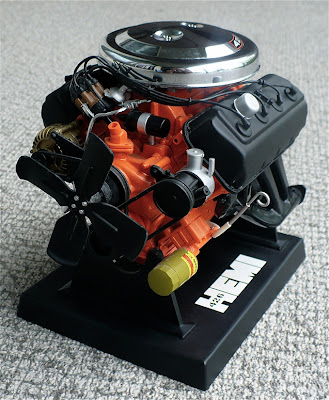 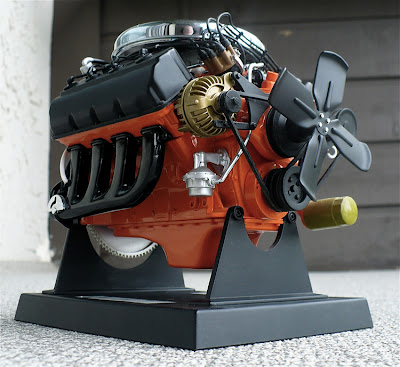 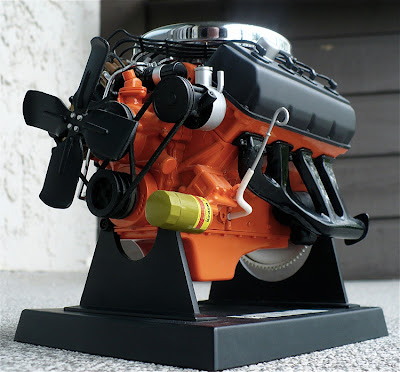 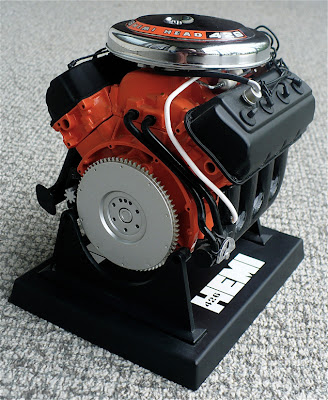 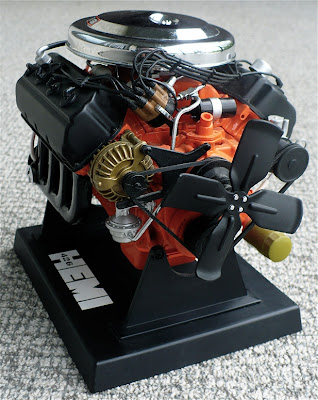 
From Wikipedia'
The Chrysler Hemi engine, known by the trademark Hemi, is a series of V8 engines built by Chrysler with a hemispherical combustion chamber. Three different types of Hemi V8 engines have been built by Chrysler for automobiles: the first (known as the Chrysler FirePower engine) from 1951–1958, the second from 1964–1971, and the third beginning in 2003. Although Chrysler is most identified with the use of Hemi as marketing term, many other auto manufacturers have incorporated similar designs.
During the 1970s and 1980s, Chrysler also used the Hemi name for their Australian-made Hemi-6 engine and applied it to the 4-cylinder Mitsubishi 2.6L engine installed in various North American market vehicles.

The hemispherical head design was revived in 1964. These were the first engines officially designated Hemi, a name Chrysler trademarked. Chrysler Hemi engines of this generation displaced 426 cu in (7.0 L). Just 11,000 Hemi engines were ultimately produced for consumer sale due to their relatively high cost and the sheer size of the engine bay required to fit it in. The 426 Hemi was nicknamed the "elephant engine" at the time, a reference to its heavy weight and large outer dimensions. Its 10.72 in (272.3 mm) deck height and 4.80 in (121.9 mm) bore spacing made it the biggest engine racing in NASCAR at the time.
The 426 Hemi of the 1960s was an engine produced for use in NASCAR, used in a racing version of a Plymouth Belvedere in 1964. It was not initially available to the general buying public. The 426 Hemi was not allowed to compete in NASCAR's 1965 season due to its unavailability in production vehicles sold to the general public. Chrysler introduced the "Street" Hemi in 1966 for its intermediate range of cars and sold the required number of Hemi engines to the public to legimatize its use for NASCAR in 1966.
Although all manufacturers were familiar with multi-valve engines and hemispherical combustion chambers, adding more valves per cylinder, or designing the complex valve train needed for a hemispherical chamber, were expensive ways of improving the high-RPM breathing of production vehicles. By canting the angle of the NASCAR-mandated two valves per cylinder, significantly larger valves could be used. The Chrysler hemi had an oversquare 4.25 in (108.0 mm) bore and 3.75 in (95.3 mm) stroke as did the wedge-chambered big-block Chrysler RB.
The 426 Hemi also was used in NHRA drag racing. Its large casting allowed the engine to be overbored and stroked to displacements unattainable in the other engines of the day. Top-fuel racing organizers limited the bore spacing of engines until very recently, when under pressure from Ford and other manufacturers, the bore spacing allowed was increased to 4.900"—this allows other engines such as the Ford 385 series to begin to compete. However these engines based on the old Chrysler design continue to dominate Top Fuel and Funny Car classes today . In NHRA top fuel racing the engine is equipped with a large Roots type supercharger and short individual exhaust pipes of course and fueled with nitromethane.
The 426 Hemi, in "street Hemi" form, was produced for consumer automobiles from 1965 through 1971. There were many differences between the Hemi and the Wedge-head big-block, including cross-bolted main bearing caps and a different head bolt pattern. There were also many differences between the racing Hemi's and the street Hemi, including but not limited to compression ratio, camshaft, intake manifold, exhaust manifold. Some 1960s NASCAR and NHRA Hemi engines featured magnesium cross-ram intake manifolds and magnesium oil pans in an attempt to reduce the massive weight of the overall engine, along with chain-driven internal dry-sump oil systems. Today, aftermarket blocks, heads, intakes, rods and pistons are usually made of aluminum.
The street Hemi version was rated at 425 bhp (316.9 kW)(Gross) with two Carter AFB carburetors. In actual dynomometer testing, it produced 433.5 horsepower and 472 lb·ft (640 N·m) torque in purely stock form. Interestingly, Chrysler's sales literature published both Gross and Net HP ratings for 1971 (425 Gross HP and 350 Net HP.)
To avoid confusion with earlier (1951–'58) and current Hemi engines, the 426-based Hemi is sometimes called the "2G" or "Gen 2" Hemi.
Posted by -Warren Zoell at 4:37 PM

When I was younger (and crazier) a friend and I had a funky home made dune buggy with a small Pontiac 6 cylinder motor in it. It was pretty lame. Until that is, we stumbled upon a cheap Chrysler hemi and trans out of a wrecked car. We bought it and put it in our little dune buggy. It went from lame to crazy very quickly. Still looked like crap, but was REALLY fast and hard to control. We couldn't get it registered and after a couple of tickets, ended up selling it. Fun while it lasted...

Ah the devil may care freedom of youth.