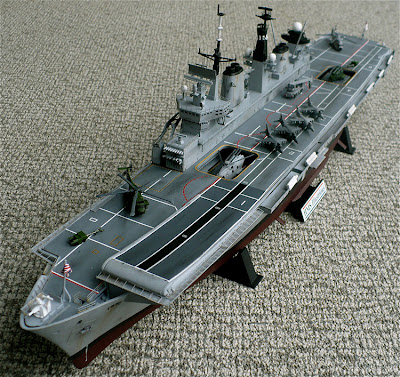 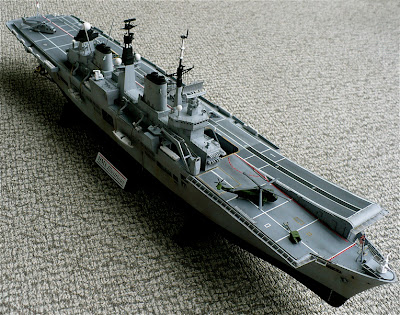 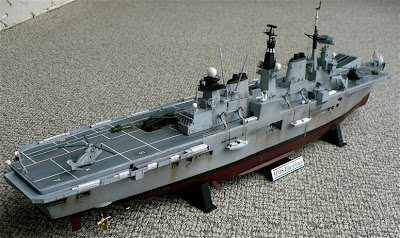 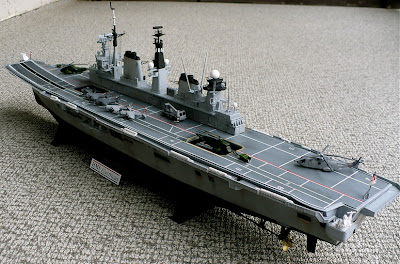 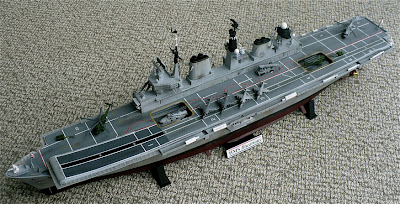 Here are some images of Airfix's 1/350 scale HMS Illustrious (R06).
The big complaint I have about this kit was the lack of detail this kit contained. Thankfully I had spare railing and netting kicking around to bring its detail level up. Though I won't attest to the accuracy. I did the best I could with the materials on hand.

HMS Illustrious is the second of three Invincible-class light aircraft carriers built for the Royal Navy in the late 1970s and early 1980s. She is the fifth warship and second aircraft carrier to bear the name Illustrious, and is affectionately known as "Lusty" to her crew. The vessel just missed the Falklands Conflict, but was deployed to Iraq and Bosnia in the 1990s and to Sierra Leone in 2000. An extensive re-fit in 2002 meant that she missed the Iraq War, but she was finished in time to assist British citizens trapped by the 2006 Lebanon War.
Following the retirement of her fixed-wing Harrier II aircraft in 2010, Illustrious now operates as one of two Royal Navy helicopter carriers. She is the oldest ship in the active fleet and it is envisaged that she will be withdrawn from service in 2014 (after 32 years service) and will not be replaced until HMS Queen Elizabeth is commissioned later in the decade.

Illustrious, the second of the planned three Invincible class aircraft carriers, was laid down at Swan Hunter on the River Tyne in 1976 and launched in 1978. As the ship neared the end of its fitting out period, the Falklands War broke out. As a consequence, work on Illustrious was greatly speeded up. The war was won before Illustrious could be finished, but she did perform a useful service in the aftermath. Until the RAF airfield on the Falkland Islands was repaired, an aircraft carrier was required on station to protect the area from possible Argentine attack. Invincible had been on station for many months when Illustrious arrived to its relief. Illustrious was needed so quickly that the ship was commissioned whilst underway. Rear Admiral Derek Reffell commanded the relief task group from Illustrious during this period. After the RAF airfield was repaired, Illustrious returned to the UK for a full shakedown cruise and workup period, with a formal commissioning on 20 March 1983.
Posted by -Warren Zoell at 5:40 PM

Hi Warren We have been very good. It's my preferred range for ships.