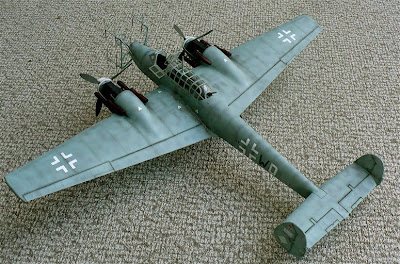 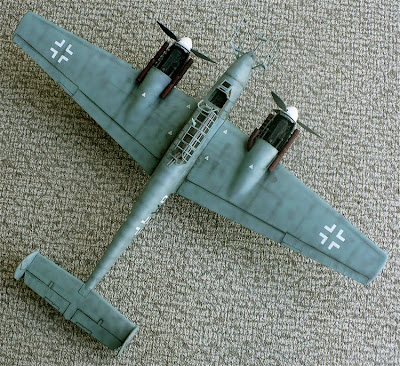 Later production variants The production of the Bf 110 was put on a low priority in 1941 in expectation of its replacement by the Me 210. During this time, two versions of the Bf 110 were developed, the E and F models. The E was designed as a fighter bomber (Zerstörer Jabo), able to carry four 50 kg (110 lb) ETC-50 racks under the wing, along with the centerline bomb rack. The first E, the Bf 110 E-1 was originally powered by the DB 601B engine, but shifted to the DB 601P as they became available in quantity. A total of 856 Bf 110E models were built between August 1940 and January 1942. The E models also had upgraded armour and some fuselage upgrades to support the added weight. Most pilots of the Bf 110E considered the aircraft slow and unresponsive, one former Bf 110 pilot commenting the E was "rigged and a total dog."

The Bf 110F featured the new DB 601F engines which produced 993 kW/1,350 PS (almost double the power the original Jumo engines provided), which allowed for upgraded armour, strengthening, and increased weight with no loss in performance. Three common versions of the F model existed. Pilots typically felt the Bf 110F to be the best of the 110 line, being fully aerobatic and in some respects smoother to fly than the Bf 109, though not as fast. Eventually 512 Bf 110F models were completed between December 1941 and December 1942, when production gave way to the Bf 110G.

Although the Me 210 entered service in mid-1941, it was eventually withdrawn for further development. There were insufficient aircraft to fully replace the Bf 110, so it remained in service until the end of the war. In the wake of the failure of the Me 210, the Bf 110G was designed. Fitted with the DB 605B engines, producing 1,085 kW (1,475 PS) in "War Emergency" setting, and 997 kW (1,355 PS) at 5.8 km (19,000 ft) altitude, the Bf 110G also underwent some changes which improved the aerodynamics of the aircraft, as well as upgrading the nose armament. No Bf 110 G-1 existed, as the Bf 110 G-2 became the baseline Bf 110G and was fitted with a large number of Rüstsätze, making the G the most versatile of the Bf 110. The initial batch of six pre-series production G-0 aircraft built in June 1942 followed by 797 G-2, 172 G-3 and 2,293 G-4 models, built between December 1942 and April 1945. Pilots reported the Bf 110G to be a "mixed bag" in the air, in part due to all changes between the G and F series. However the Bf 110G was considered a superior gun platform with excellent all-around visibility, and considered, until the advent of the Heinkel He 219, the best of the Luftwaffe night fighters.

The Bf 110's main strength was its ability to accept unusually powerful air-to-air weaponry. Early versions had four 7.92 mm (.312 in) MG 17 machine guns in the upper nose and two 20 mm MG FF/M cannons fitted in the lower part of the nose. Later versions replaced the MG FF/M with the more powerful 20 mm MG 151/20 cannons and many G-series aircraft, especially those who served in the bomber-destroyer role, had two 30 mm (1.18 in) MK 108 cannons fitted instead of the MG 17. The defensive armament consisted of a single, flexibly-mounted 7.92 mm (.312 in) MG 15 machine gun. Late F-series and prototype G-series were upgraded to a 7.92 mm (.312 in) MG 81 machine gun with a higher rate of fire and the G-series was equipped with the twin-barrelled MG 81Z. Many G-series night fighters were retrofitted or factory-built with the Schräge Musik off-bore gun system, firing upward at an oblique angle for shooting down bombers while passing underneath, frequently equipped with two 20 mm MG FF/M, but field installations of the 20 mm MG 151/20 or 30 mm (1.18 in) MK 108 cannons were also utilized. The Schräge Musik weapons were typically mounted to the back of the rear cockpit.

The Bf 110 G-2/R1 was also capable of accepting armament such as the Bordkanone series 37 mm (1.46 in) BK 37 cannon. A single hit from this weapon was enough to destroy any Allied bomber.

The Bf 110 would be the backbone of the Nachtjagdgeschwader throughout the war. The first units undertook defence operations over Germany as early as the autumn of 1940. Opposition was light until 1942, when British heavy bombers started to appear.

One of the most notable actions of the Bf 110 occurred on the night of the 17/18 August 1943. Bf 110 units had been mass equipped with the Schräge Musik system, an emplacement of two upward-firing cannon, mounted almost midway down the cockpit canopy behind the pilot, which could attack the blind spot of RAF Bomber Command's Avro Lancaster bombers, which lacked a ventral turret. Using this, NJG 5's Leutnant Peter Erhardt destroyed four bombers in 30 minutes. Despite excellent visibility, none of the RAF bombers had reported anything unusual that would indicate a new weapon or tactics in the German night fighter force. This ignorance was compounded by the tracerless ammunition used by the Bf 110s, as well as firing on the British bombers blind spots. Many RAF crews witnessed a sudden explosion of a friendly aircraft, but assumed, in some cases, it was very accurate flak. Few of the German fighters were seen, let alone fired on.

In September 1943, Arthur Harris, convinced a strategic bombing campaign against Germany's cities would force a German collapse, pressed for further mass attacks. While RAF Bomber Command destroyed Hannover's city centre and 86% of crews dropped their bombs within 5 km (3 mi) of the aiming point, losses were severe. The Ruhr Area was the prime target for British bombers in 1943, and German defences inflicted a considerable loss rate. The Bf 110 had a hand in the destruction of some 2,751 RAF bombers in 1943, along with German flak and other night fighters. Later, the RAF developed a radar countermeasure; Window, to confuse German defences and introduced de Havilland Mosquitos to fly feints and divert the Bf 110s and other night fighter forces from their true target, which worked, initially. At this time, the Bf 110 remained the backbone of the fight-force, although it was now being reinforced by the Junkers Ju 88. In October 1943, General Josef Kammhuber reported the climbing attrition rate as "unacceptable", and urged Hermann Göring to stop committing the German night fighters to daylight operations. Many Nachtjagdgeschwader had taken part in costly daylight battles of attrition. From June-August, it had increased from around 2% to 9.8%. However the fortunes for the mostly Bf 110 equipped force turned during late August/September 1943. The night fighter arm claimed the destruction of 123 out of some 1,179 bombers over Hamburg on one night; a 7.2% loss rate. During the Battle of Berlin, 1,128 bombers were lost in five months. RAF Bomber Command had "nearly burned out". These losses were primarily a result of fighter defences, at the heart of which was the Bf 110. The German defences had won a victory which prevented deep penetration raids for a time. But Luftwaffe losses were high; 15% of crews were killed in the first three months of 1944.