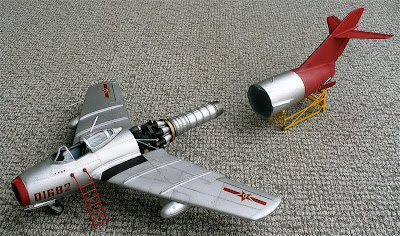 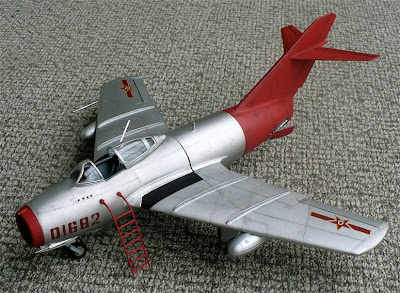 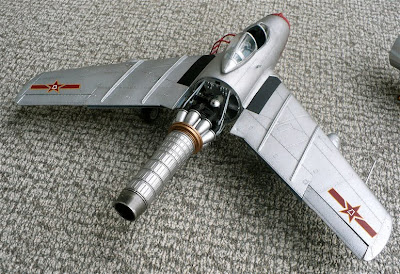 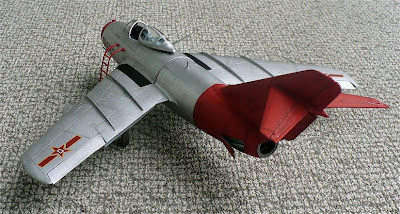 Here are some images of Trumpeter's 1/32 Mikoyan Gurevich MiG 15 Bis.
The two big problems I've noticed with this model is the back half of the fuselage does not line up properly with the front half which is OK because it will be displayed in two parts anyway. The second problem is the canopy. The canopy framework lines are far two thick for this aircraft and I intend on replacing it with an aftermarket part just as soon as the opportunity arises.

The Mikoyan-Gurevich MiG-15 (Russian: Микоян и Гуревич МиГ-15) was a jet fighter developed for the USSR by Artem Mikoyan and Mikhail Gurevich. The MiG-15 was one of the first successful swept-wing jet fighters, and it achieved fame in the skies over Korea, where early in the war, it outclassed all straight-winged enemy fighters in daylight. The MiG-15 also served as the starting point for development of the more advanced MiG-17 which was still an effective threat to supersonic American fighters over North Vietnam in the 1960s. The MiG-15 is believed to have been the most widely produced jet aircraft ever made, with over 12,000 built. Licensed foreign production perhaps raised the total to over 18,000. The MiG-15 is often mentioned along with the North American F-86 Sabre in lists of the best fighter aircraft of the Korean War and in comparison with fighters of other eras.

NATO and USAF reporting names were as follows: