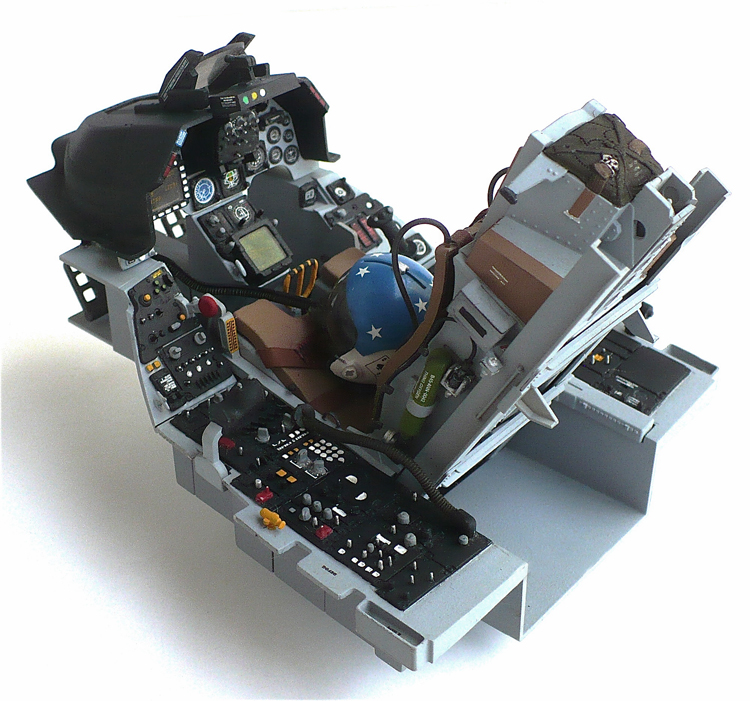 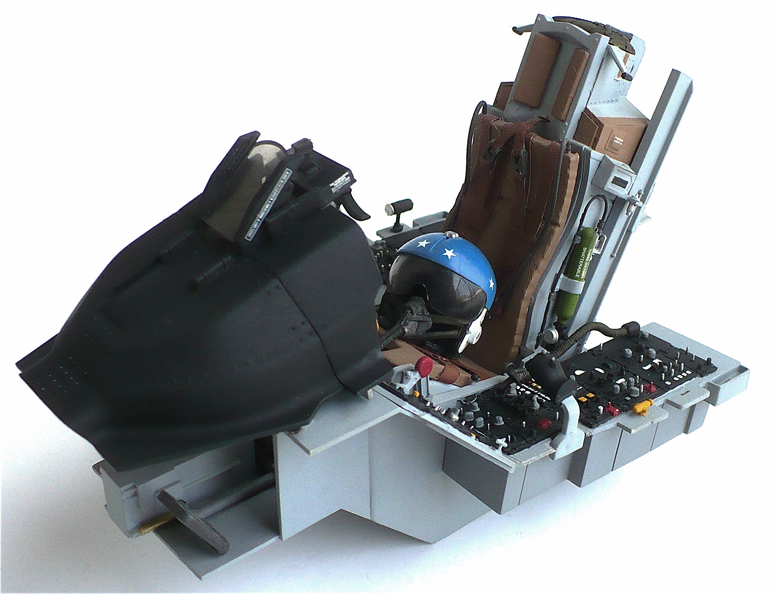 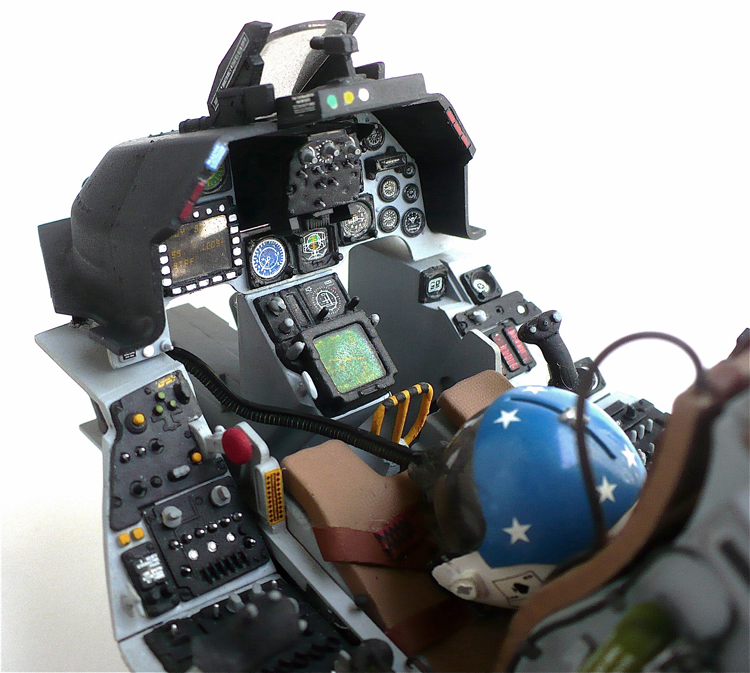 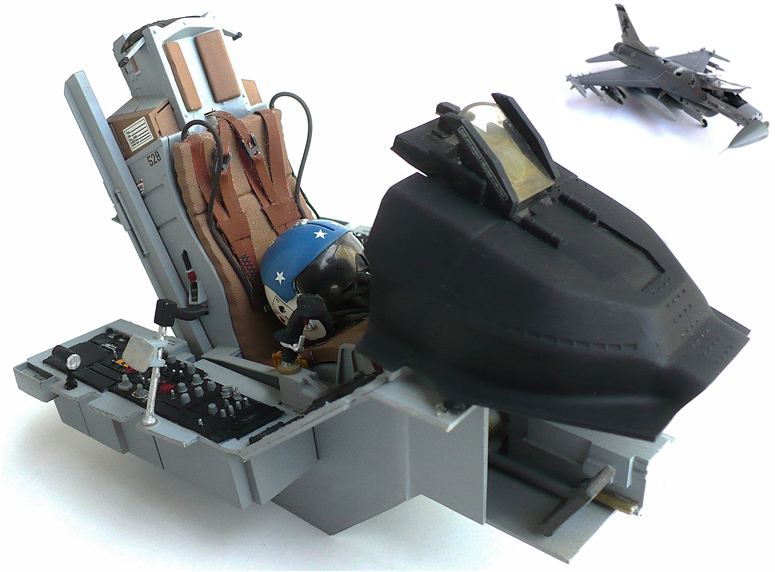 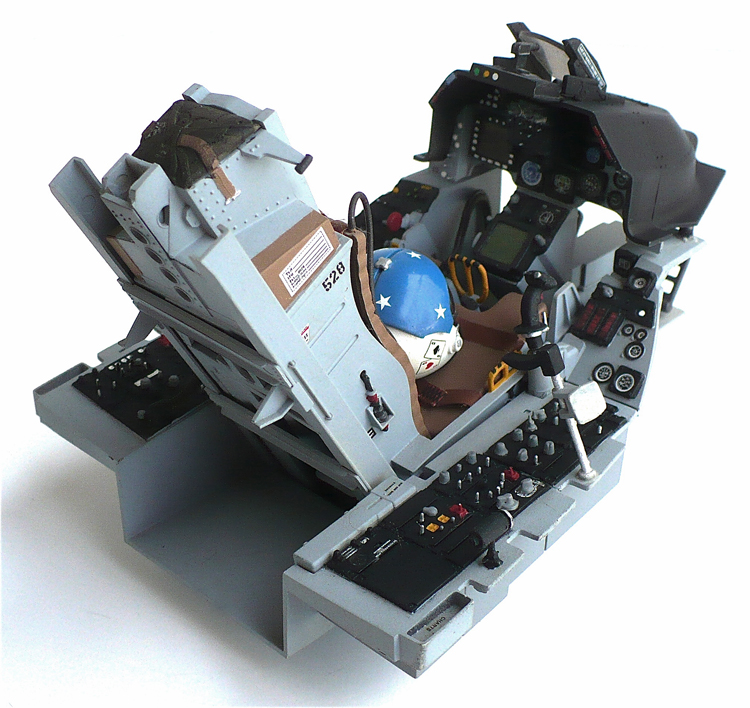 Here are some more images of Italeri's (ESCI/ERTL molds) 1/12 scale General Dynamics F 16 Cockpit. This model is of the early F 16 version and from what I've been told quite accurate. This kit along with its 104 counterpart is amazing. The detail is excellent and was a blast to build. I only wish they had made more in the series like a B 52 cockpit. I can dream can't I?

From Wikipedia'
One feature of the F-16 for air-to-air combat performance is the cockpit's exceptional field of view. The single-piece, bird-proof polycarbonate bubble canopy provides 360° all-round visibility, with a 40° look-down angle over the side of the aircraft, and 15° down over the nose (compared to the more common 12–13° of preceding aircraft); the pilot's seat is elevated for this purpose. Furthermore, the F-16's canopy lacks the forward bow frame found on many fighters, which is an obstruction to a pilot's forward vision. The F-16's ACES II zero/zero ejection seat is reclined at an unusual tilt-back angle of 30°; most fighters have a tilted seat at 13–15°. The tilted seat can accommodate taller pilots and increases G-force tolerance; however it has been associated with reports of neck ache, possibly caused by incorrect head-rest usage. Subsequent U.S. fighters have adopted more modest tilt-back angles of 20°. Due to the seat angle and the canopy's thickness, the F-16's ejection seat lacks steel canopy-breakers for emergency egress; instead the entire canopy is jettisoned prior to the seat's rocket firing.
The pilot flies primarily by means of an armrest-mounted side-stick controller (instead of a traditional center-mounted stick) and an engine throttle; conventional rudder pedals are also employed. To enhance the pilot's degree of control of the aircraft during high-g combat maneuvers, various switches and function controls were moved to centralised "hands on throttle-and-stick (HOTAS)" controls upon both the controllers and the throttle. Hand pressure on the side-stick controller is transmitted by electrical signals via the FBW system to adjust various flight control surfaces to maneuver the F-16. Originally the side-stick controller was non-moving, but this proved uncomfortable and difficult for pilots to adjust to, sometimes resulting in a tendency to "over-rotate" during takeoffs, so the control stick was given a small amount of "play". Since introduction on the F-16, HOTAS controls have become a standard feature on modern fighters.
The F-16 has a head-up display (HUD), which projects visual flight and combat information in front of the pilot without obstructing the view; being able to keep his head "out of the cockpit" improves a pilot's situational awareness. Further flight and systems information are displayed on multi-function displays (MFD). The left-hand MFD is the primary flight display (PFD), typically showing radar and moving-maps; the right-hand MFD is the system display (SD), presenting information about the engine, landing gear, slat and flap settings, and fuel and weapons status. Initially, the F-16A/B had monochrome cathode ray tube (CRT) displays; replaced by color liquid crystal displays on the Block 50/52. The MLU introduced compatibility with night-vision goggles (NVG). The Boeing Joint Helmet Mounted Cueing System (JHMCS) is available from Block 40 onwards, for targeting based on where the pilot's head faces, unrestricted by the HUD, using high-off-boresight missiles like the AIM-9X.
Posted by -Warren Zoell at 11:26 AM

That is Awesome Warren, I'm sure there are some out there that could go nuts with detailing this. In saying that it looks great the way it is.....very nice.2865982623

Where can I buy it?

They come up on Ebay quite often.