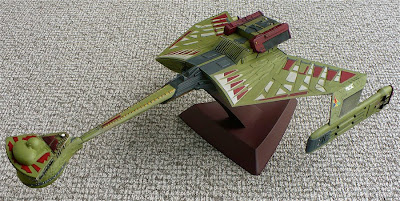 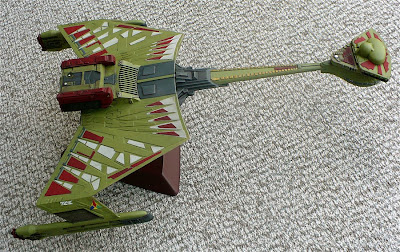 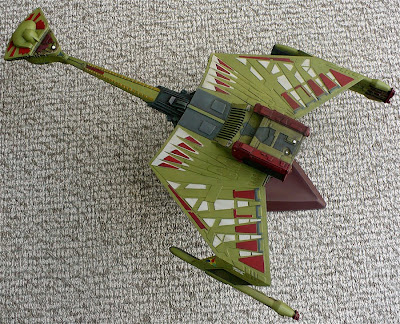 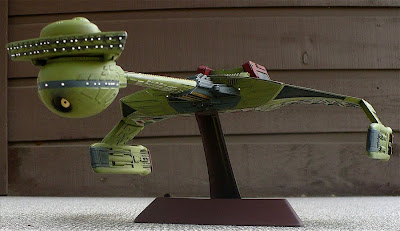 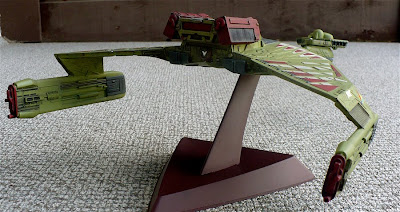 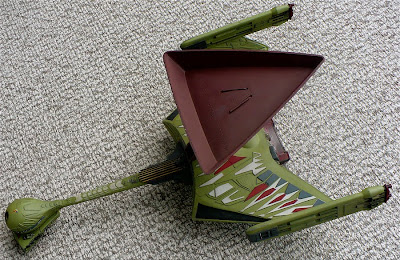 Here are some images of AMT's Klingon K't'inga class battle cruiser. From Wikipedia "

An upgrade of the design used for the D7-class vessel, the K't'inga-class battlecruiser was first conceived for use in the pilot episode of Star Trek: Phase II. When Phase II was abandoned, the story of the pilot was adapted for Star Trek: The Motion Picture, where three K't'inga-class battlecruisers are used in the opening scenes. Andrew Probert is credited as the designer of the K't'inga model in its design patent, while the class name was given by Gene Roddenberry in his novelization of The Motion Picture. Although sharing a nearly identical configuration with the D7-class, the primary difference in the K't'inga-class is the level of detail on the hull, enhanced to make the model appear more believable to viewers on screen. The configuration of the vessel's impulse engines also differs from that of the D7-class. The K't'inga model was later revisited for Star Trek VI: The Undiscovered Country, in which Industrial Light & Magic enhanced the original studio model with glowing engine nacelles and changed the color from muted gray-greens to light gray with gold accents and maroon paneling. ILM's alterations were meant to "contrast... with the Enterprise-A, which is very smooth and monochromatic and cool, while this Klingon ship is very regal and ostentatious and warm". A CGI version of the ship, with a slightly modified nacelle design, was created for the later seasons of Deep Space Nine; this particular model was erroneously used to represent older Klingon ships in the Voyager episode "Prophecy" and the Enterprise episode "Unexpected". The original studio model for the K't'inga-class battlecruiser was later sold in a 2006 Christie's auction for US$102,000.

The K't'inga-class battlecruiser has similar armaments to the D7-class battlecruiser, with a photon torpedo launcher in the forward module and six disruptor cannons. In addition, the ship possesses an aft torpedo launcher and is capable of firing a powerful disruptor beam from the forward module. The Voyager episode "Flashback" also shows the K't'inga-class using concussion weapons. Unlike the D7-class, the K't'inga-class uses a cloaking device. In The Next Generation episode "The Emissary", these ships are used as sleeper ships, which could travel for decades with its crew in suspended animation. However, the class is equipped with both impulse engines and warp drive. The class is stated to have a crew of 800 and a length of 350 meters. The interior of the battlecruiser was designed by Douglas Trumbull, with the intent of appearing like "an enemy submarine in World War II that's been out at sea for too long". The K't'inga-class is used extensively throughout the Star Trek series, appearing from the films set in 2270s to the closing episodes of Deep Space Nine in 2375, often appearing as a ship of the line in battle scenes.

This thing looks like a flying eyeball...nice colors though!

If Santa Claus were a Klingon this is what he'd drive.

Marvelan- What the hell does this have to do with a Klingon K't'inga Class battle cruiser.? Please stay on topic and stop throwing ads in my face.