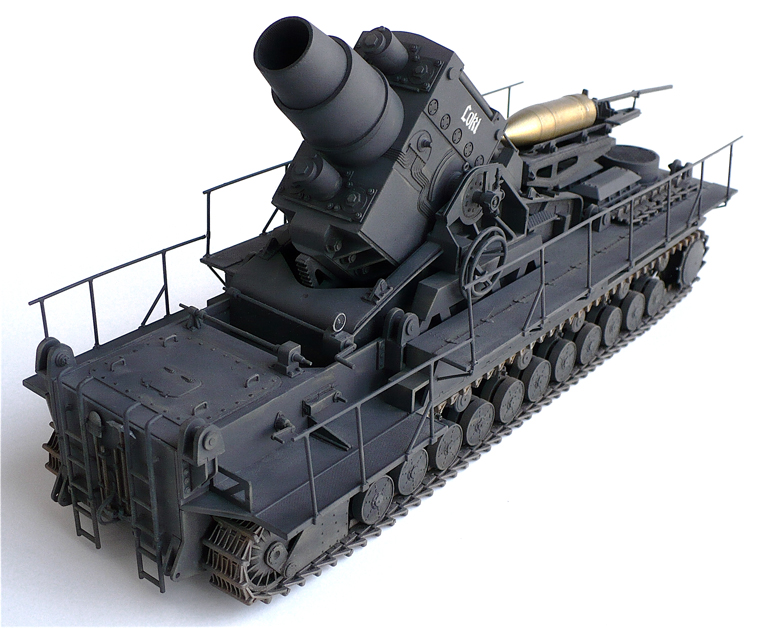 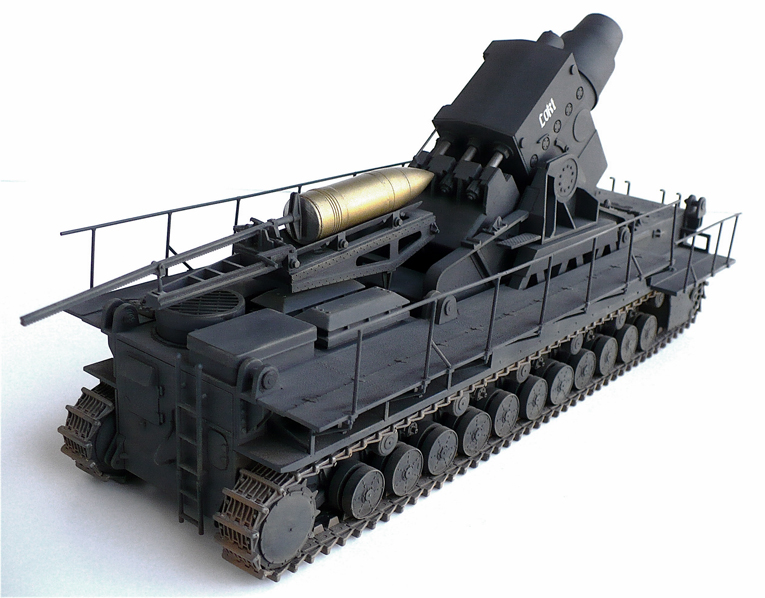 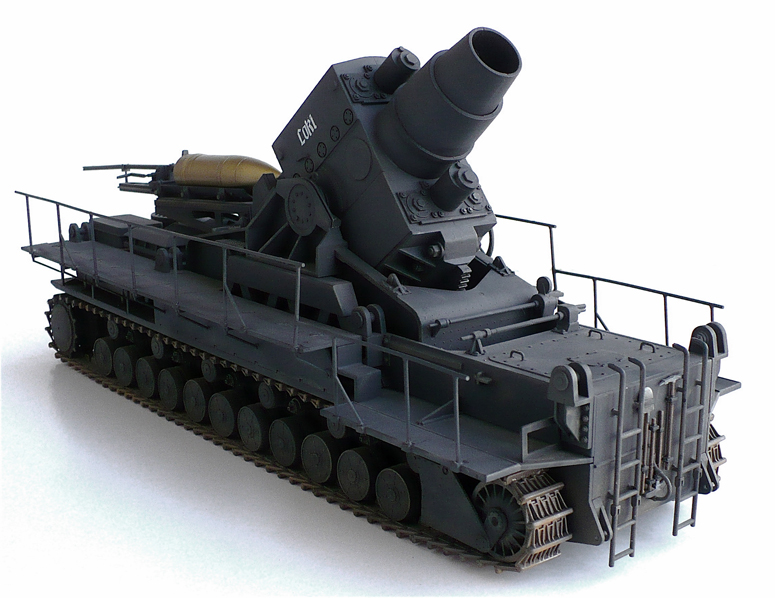 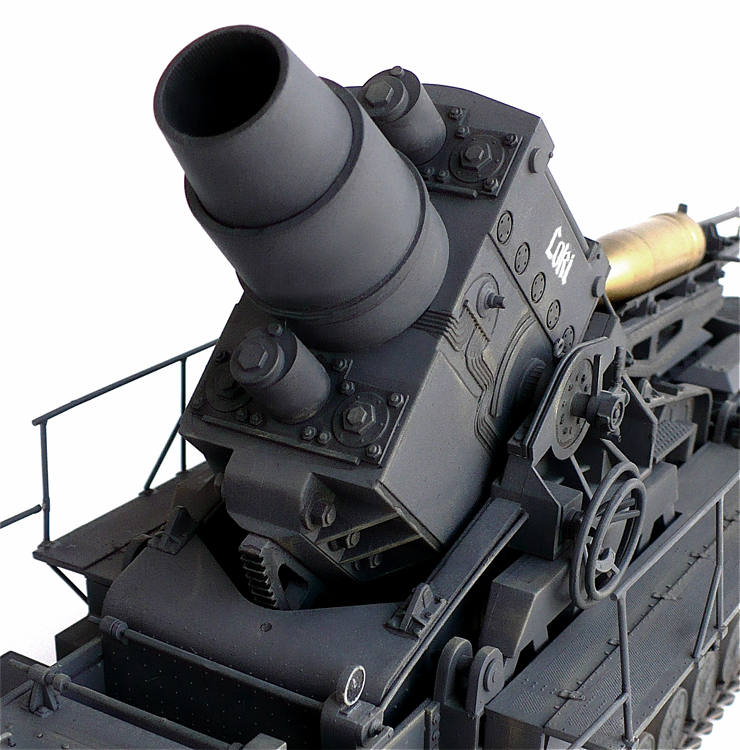 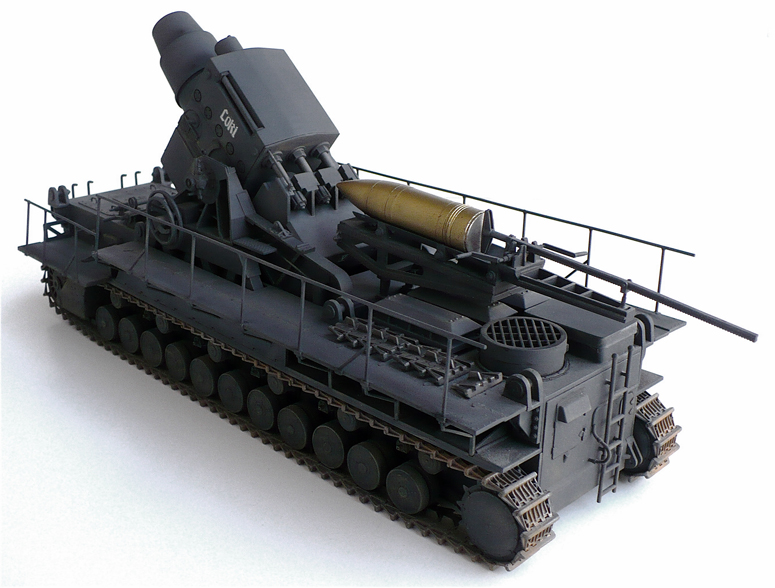 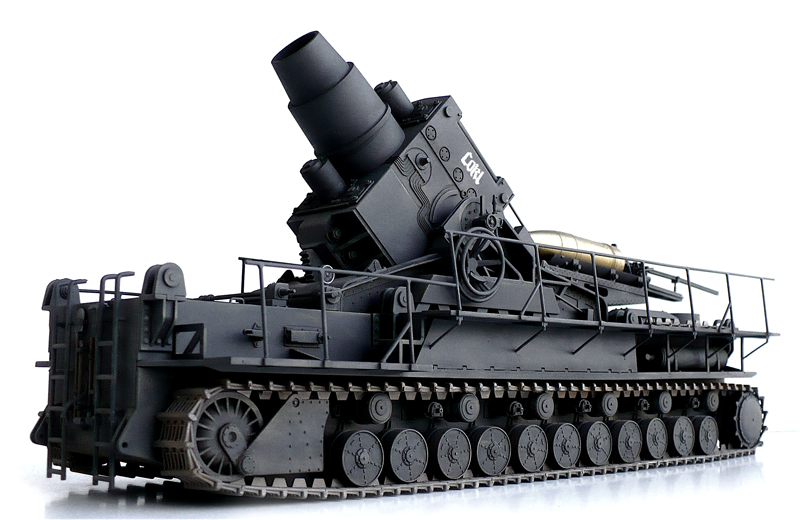 Here are some images of Dragon Models 1/35 scale Rheinmetall's Self propelled Mortar 60 cm Morser.
Dragon Models has now re released this kit with the additional rail transporters. I hate it when model kit companies do that. Re release the kit later on with even more features. (In my best John Cleese voice) Makes me maaaaddddd!

"Karl-Gerät" (040/041) (German literally "Karl-device"), also known as Thor and Mörser Karl, was a World War II German self-propelled siege mortar (Mörser) designed and built by Rheinmetall. It was the largest self-propelled weapon to see service. Its heaviest munition was a 60 cm (24 in) diameter, 2,170 kg (4,780 lb) shell, and the range for its lightest shell of 1,250 kg (2,760 lb) was just over 10 km (6.2 mi). Each gun had to be accompanied by a crane, a heavy transport trailer, and several modified tanks to carry shells.
Seven guns were built, of which six saw combat between 1941 and 1945. It was used in attacking the Soviet fortresses of Brest-Litovsk and Sevastopol, bombarded Polish resistance fighters in Warsaw and participated in the Battle of the Bulge and the attacks against the Remagen Bridgehead. Only one exists today; the others were scrapped after the war.
In March 1936 Rheinmetall made a proposal for a super-heavy howitzer to attack the Maginot Line. Their initial concept was for a weapon that would be transported by several tracked vehicles and assembled on site, but the lengthy preparation time drove them to change it to a self-propelled weapon in January 1937. Extensive driving trials took place in 1938 and 1939 using the first Neubaufahrzeug tank prototype and a scale model to investigate the extremely high ground pressure and steering of such an enormous vehicle. Firing trials took place in June 1939. The full-scale driving trials were held at Unterlüss in May 1940. General Karl Becker of the Artillery was involved in the development, from whom the huge weapon gained its nickname.
In total, seven Karl-Geräte howitzers were manufactured. The first six had the nicknames "Adam" (later "Baldur"), "Eva" (later "Wotan"), "Thor", "Odin", "Loki", and "Ziu"; the seventh, the research and test weapon (Versuchs-Gerät), had no name. Delivery of the six production vehicles took place from November 1940 to August 1941.
In February 1941, discussions commenced concerning increasing the range of the weapon, and in May 1942, 54 cm barrels (Gerät 041) were ordered for the six vehicles. At a conference with Adolf Hitler in March 1943 it was stated that the first 54 cm Gerät 041 would be delivered by June 1943, and the third, by mid-August. Only three of the 54 cm barrels were actually completed and they could be mounted on Nr. I, IV, and V, although any vehicle could be converted to use the smaller weapon.
Twenty-two Panzer IV Ausf. D, E and F chassis were modified with a superstructure capable of carrying four shells that replaced the turret and outfitted with a crane as Munitionsschlepper ammunition transporters/loaders. Two or three of these Munitionsschlepper were assigned to each weapon.
The 124-ton vehicle was propelled by a Daimler-Benz MB 503 A 12-cylinder liquid-cooled gasoline engine or a MB 507 C 12-cylinder liquid-cooled diesel engine, but this was mainly used for aiming (the mount had only 4 degrees of traverse on each side), as the engines provided a top speed of only 10 km/h (6.2 mph). For longer distances the Karl-Gerät was disassembled using a special 35 t (34 long tons; 39 short tons) mobile crane into seven loads. The chassis was loaded onto a six-axle Culemeyer-Strassenroller lowboy trailer. The other parts of the gun were lighter and used four-axle trailers. If the trailer with the chassis on board had to cross a bridge that couldn't carry their combined weight the chassis had to be off-loaded and driven across under its own power. The weapon was moved long distances via rail on a variant of a Schnabel car; the whole chassis was hung between two huge pedestal-mounted swiveling arms fixed to five-axle bogies. When it reached its destination, the weapon was detached from its supporting arms, driven to its intended firing location, then the chassis was lowered to the ground to distribute the recoil forces more evenly in preparation for firing. The Karl-Gerät proved to have no problems moving over normal soil, but under no circumstances was it allowed to make turns on soft soil lest it throw a track. The chassis had to be backed into position to fire, which expedited movement to a new position, but the firing position had to be precisely leveled and the approach route prepared ahead of time to fill in soft spots and any ditches, etc. It could only be loaded at zero elevation, so it had to be re-aimed between every shot.

What a beast of a thing, it looks like it would have intimidated without even firing a shot.