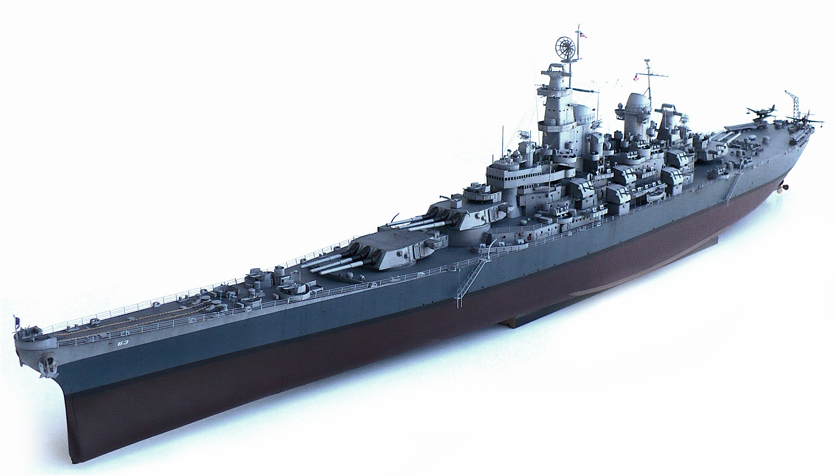 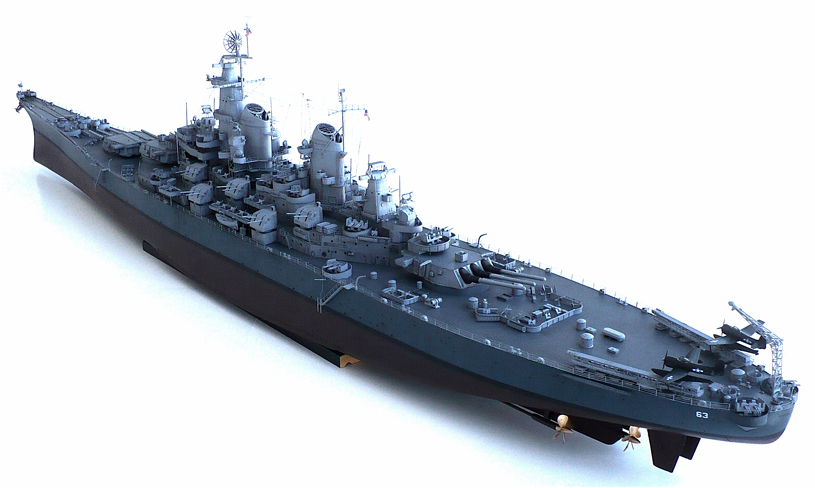 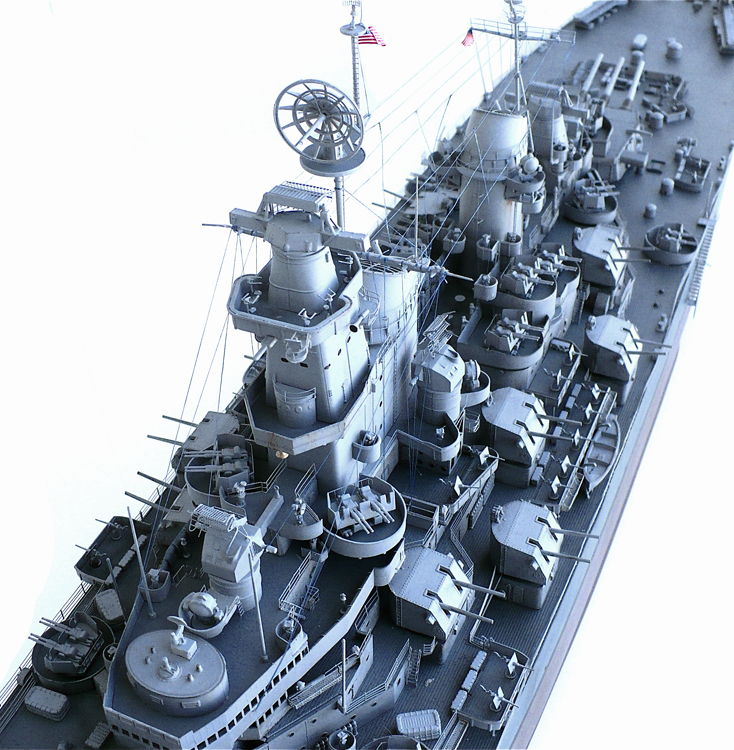 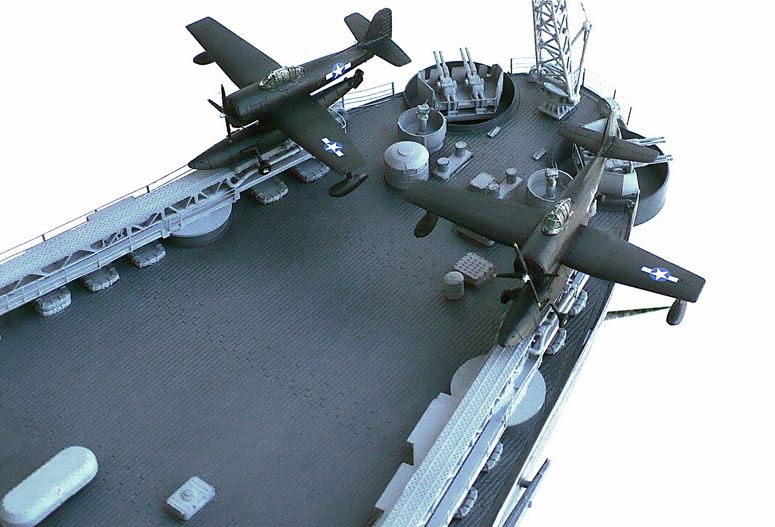 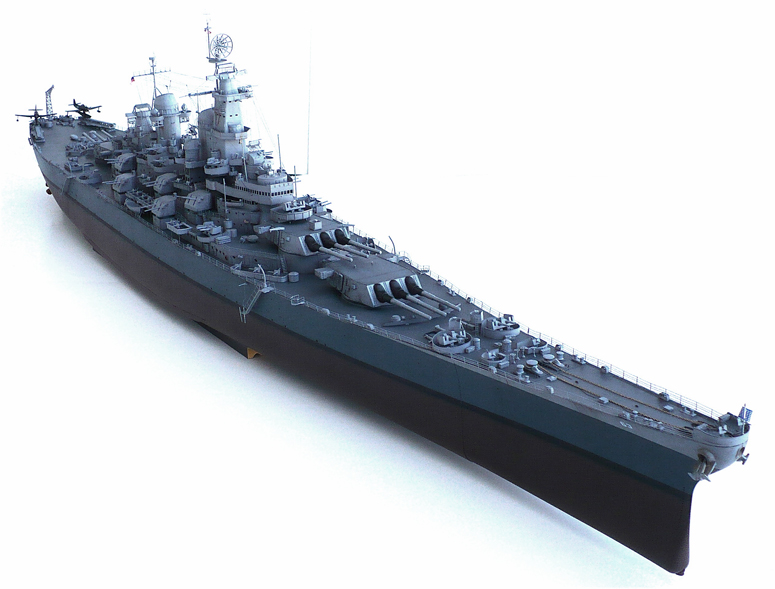 Here are some images of Trumpeter's 1/200 scale USS Missouri BB-63.
Another fantastic ship kit from Trumpeter, and at 54 inches is no slouch in size.

From Wikipedia"
USS Missouri (BB-63) ("Mighty Mo" or "Big Mo") is a United States Navy Iowa-class battleship and was the third ship of the U.S. Navy to be named in honor of the US state of Missouri. Missouri was the last battleship commissioned by the United States and was the site of the surrender of the Empire of Japan which ended World War II.
Missouri was ordered in 1940 and commissioned in June 1944. In the Pacific Theater of World War II she fought in the battles of Iwo Jima and Okinawa and shelled the Japanese home islands, and she fought in the Korean War from 1950 to 1953. She was decommissioned in 1955 into the United States Navy reserve fleets (the "Mothball Fleet"), but reactivated and modernized in 1984 as part of the 600-ship Navy plan, and provided fire support during Operation Desert Storm in January/February 1991.
Missouri received a total of 11 battle stars for service in World War II, Korea, and the Persian Gulf, and was finally decommissioned on 31 March 1992, but remained on the Naval Vessel Register until her name was struck in January 1995. In 1998, she was donated to the USS Missouri Memorial Association and became a museum ship at Pearl Harbor, Hawaii.
Missouri was one of the Iowa-class "fast battleship" designs planned in 1938 by the Preliminary Design Branch at the Bureau of Construction and Repair. She was laid down at the Brooklyn Navy Yard on 6 January 1941, launched on 29 January 1944 and commissioned on 11 June with Captain William Callaghan in command. The ship was the third of the Iowa class, but the fourth and final Iowa-class ship commissioned by the U.S. Navy. The ship was christened at her launching by Mary Margaret Truman, daughter of Harry S. Truman, then a United States Senator from Missouri.[5]
Missouri's main battery consisted of nine 16 in (406 mm)/50 cal Mark 7 guns, which could fire 2,700 lb (1,200 kg) armor-piercing shells some 20 mi (32.2 km). Her secondary battery consisted of twenty 5 in (127 mm)/38 cal guns in twin turrets, with a range of about 10 mi (16 km). With the advent of air power and the need to gain and maintain air superiority came a need to protect the growing fleet of allied aircraft carriers; to this end, Missouri was fitted with an array of Oerlikon 20 mm and Bofors 40 mm anti-aircraft guns to defend allied carriers from enemy airstrikes. When reactivated in 1984 Missouri had her 20 mm and 40 mm AA guns removed, and was outfitted with Phalanx CIWS mounts for protection against enemy missiles and aircraft, and Armored Box Launchers and Quad Cell Launchers designed to fire Tomahawk missiles and Harpoon missiles, respectively.
Missouri was the last U.S. battleship to be completed. Wisconsin, the highest-numbered U.S. battleship built, was completed before Missouri; BB-65 to BB-71 were ordered but cancelled.

After the Japanese agreed to surrender, Admiral Sir Bruce Fraser of the Royal Navy, the Commander of the British Pacific Fleet, boarded Missouri on 16 August and conferred the honour of Knight of the British Empire upon Admiral Halsey. Missouri transferred a landing party of 200 officers and men to the battleship Iowa for temporary duty with the initial occupation force for Tokyo on 21 August. Missouri herself entered Tokyo Bay early on 29 August to prepare for the signing by Japan of the official instrument of surrender.
High-ranking military officials of all the Allied Powers were received on board on 2 September, including Chinese General Hsu Yung-Ch'ang, British Admiral-of-the-Fleet Sir Bruce Fraser, Soviet Lieutenant-General Kuzma Nikolaevich Derevyanko, Australian General Sir Thomas Blamey, Canadian Colonel Lawrence Moore Cosgrave, French Général d'Armée Philippe Leclerc de Hautecloque, Dutch Vice Admiral Conrad Emil Lambert Helfrich, and New Zealand Air Vice Marshal Leonard M. Isitt.
Fleet Admiral Chester Nimitz boarded shortly after 0800, and General of the Army Douglas MacArthur, the Supreme Commander for the Allies, came on board at 0843. The Japanese representatives, headed by Foreign Minister Mamoru Shigemitsu, arrived at 0856. At 0902, General MacArthur stepped before a battery of microphones and opened the 23-minute surrender ceremony to the waiting world by stating, "It is my earnest hope—indeed the hope of all mankind—that from this solemn occasion a better world shall emerge out of the blood and carnage of the past, a world founded upon faith and understanding, a world dedicated to the dignity of man and the fulfillment of his most cherished wish for freedom, tolerance, and justice."
During the surrender ceremony, the deck of Missouri was decorated with a 31-star American flag that had been taken ashore by Commodore Matthew Perry in 1853 after his squadron of "Black Ships" sailed into Tokyo Bay to force the opening of Japan's ports to foreign trade. This flag was actually displayed with the reverse side showing, i.e., stars in the upper right corner: the historic flag was so fragile that the conservator at the Naval Academy Museum had sewn a protective linen backing to one side to help secure the fabric from deteriorating, leaving its "wrong side" visible. The flag was displayed in a wood-framed case secured to the bulkhead overlooking the surrender ceremony. Another U.S. flag was raised and flown during the occasion, a flag that some sources have indicated was in fact that flag which had flown over the U.S. Capitol on 7 December 1941. This is not true; it was a flag taken from the ship's stock, according to Missouri's Commanding Officer, Captain Stuart "Sunshine" Murray, and it was "...just a plain ordinary GI-issue flag".
By 09:30 the Japanese emissaries had departed. In the afternoon of 5 September, Admiral Halsey transferred his flag to the battleship South Dakota, and early the next day Missouri departed Tokyo Bay. As part of the ongoing Operation Magic Carpet she received homeward bound passengers at Guam, then sailed unescorted for Hawaii. She arrived at Pearl Harbor on 20 September and flew Admiral Nimitz's flag on the afternoon of 28 September for a reception.


With the collapse of the Soviet Union in the early 1990s and the absence of a perceived threat to the United States came drastic cuts in the defense budget, and the high cost of maintaining and operating battleships as part of the United States Navy's active fleet became uneconomical; as a result, Missouri was decommissioned on 31 March 1992 at Long Beach, California. Her last commanding officer, Captain Albert L. Kaiss, wrote in the ship's final Plan of the Day:

Our final day has arrived. Today the final chapter in battleship Missouri’s history will be written. It's often said that the crew makes the command. There is no truer statement ... for it's the crew of this great ship that made this a great command. You are a special breed of sailors and Marines and I am proud to have served with each and every one of you. To you who have made the painful journey of putting this great lady to sleep, I thank you. For you have had the toughest job. To put away a ship that has become as much a part of you as you are to her is a sad ending to a great tour. But take solace in this—you have lived up to the history of the ship and those who sailed her before us. We took her to war, performed magnificently and added another chapter in her history, standing side by side our forerunners in true naval tradition. God bless you all. Missouri facing the sunken Arizona.
Missouri returned to be part of the reserve fleet at Puget Sound Naval Shipyard, Bremerton, Washington, until 12 January 1995, when she was struck from the Naval Vessel Register. She remained in Bremerton, but was not open to tourists as she had been from 1957 to 1984. In spite of attempts by citizens' groups to keep her in Bremerton and be re-opened as a tourist site, the U.S. Navy wanted to pair a symbol of the end of World War II with one representing its beginning. On 4 May 1998, Secretary of the Navy John H. Dalton signed the donation contract that transferred her to the nonprofit USS Missouri Memorial Association (MMA) of Honolulu, Hawaii. She was towed from Bremerton on 23 May to Astoria, Oregon, where she sat in fresh water at the mouth of the Columbia River to kill and drop the saltwater barnacles and sea grasses that had grown on her hull in Bremerton, then towed across the eastern Pacific, and docked at Ford Island, Pearl Harbor on 22 June, just 500 yd (460 m) from the Arizona Memorial. Less than a year later, on 29 January 1999, Missouri was opened as a museum operated by the MMA.

Plaque commemorating the surrender of Japan to end World War II
Originally, the decision to move Missouri to Pearl Harbor was met with some resistance. The National Park Service expressed concern that the battleship, whose name has become synonymous with the end of World War II, would overshadow the battleship Arizona, whose dramatic explosion and subsequent sinking on 7 December 1941 has since become synonymous with the attack on Pearl Harbor. To help guard against this perception Missouri was placed well back from and facing the Arizona Memorial, so that those participating in military ceremonies on Missouri's aft decks would not have sight of the Arizona Memorial. The decision to have Missouri's bow face the Arizona Memorial was intended to convey that Missouri now watches over the remains of Arizona so that those interred within Arizona's hull may rest in peace.
Missouri was listed on the National Register of Historic Places on 14 May 1971 for hosting the signing of the instrument of Japanese surrender that ended World War II. She is not eligible for designation as a National Historic Landmark because she was extensively modernized in the years following the surrender.
On 14 October 2009, Missouri was moved from her berthing station on Battleship Row to a drydock at the Pearl Harbor Naval Shipyard to undergo a three-month overhaul. The work, priced at $18 million, included installing a new anti-corrosion system, repainting the hull, and upgrading the internal mechanisms. Drydock workers reported that the ship was leaking at some points on the starboard side. The repairs were completed the first week of January 2010 and the ship was returned to her berthing station on Battleship Row on 7 January 2010. The ship's grand reopening occurred on 30 January.
Missouri received three battle stars for her service in World War II, five for her service during the Korean War, and three for her service during the Gulf War. Missouri also received numerous awards for her service in World War II, Korea, and the Persian Gulf.
Posted by -Warren Zoell at 1:47 PM

I was fortunate to tour the Missouri when it was still in Bremerton, WA. I couldn't believe the size of that ship and it's guns. I remember looking at that plaque and thinking just how historically important that spot was. It was about a week before they sailed her to Hawai'i.