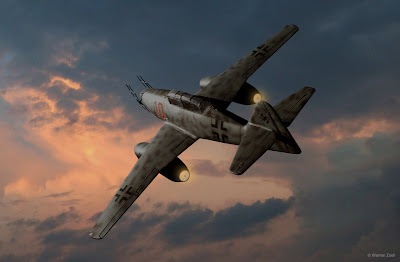 Here is my composite image of Revells 1/32 scale ME 262 B-1A Night Fighter taking off against an evening sky.

From Wikipedia" Several two-seat trainer variants of the Me 262, the Me 262 B-1a, had been adapted through the Umrüst-Bausatz 1 factory refit package as night fighters, complete with on-board FuG 218 Neptun high-VHF band radar, using Hirschgeweih ("stag's antlers") antennae with a set of shorter dipole elements than the Lichtenstein SN-2 had used, as the B-1a/U1 version. Serving with 10 Staffel, Nachtjagdgeschwader 11, near Berlin, these few aircraft (alongside several single-seat examples) accounted for most of the 13 Mosquitoes lost over Berlin in the first three months of 1945. However, actual intercepts were generally or entirely made using Wilde Sau methods, rather than AI radar-controlled interception. As the two-seat trainer was largely unavailable, many pilots had to make their first flight in a jet in a single-seater without an instructor.