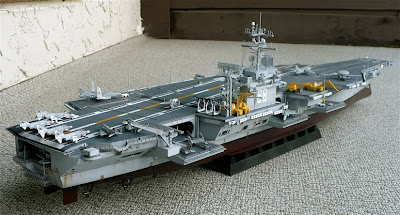 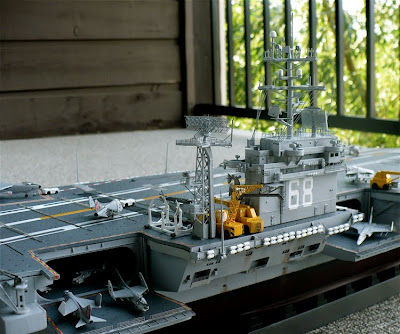 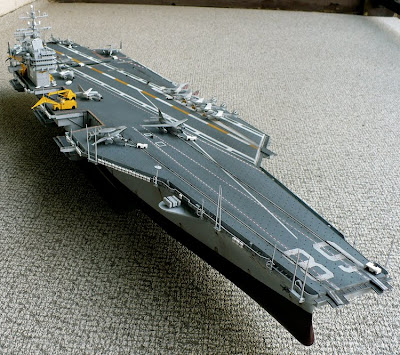 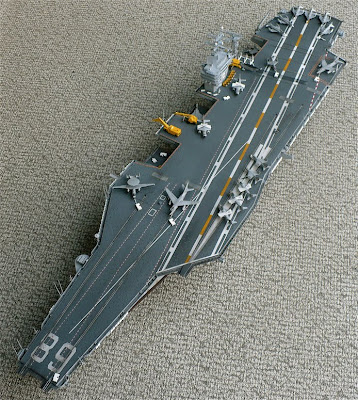 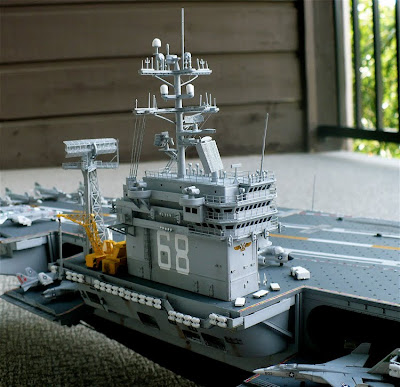 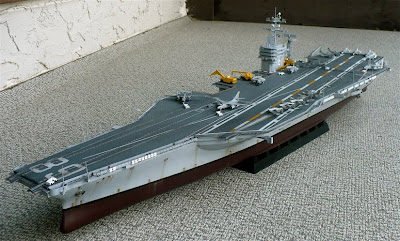 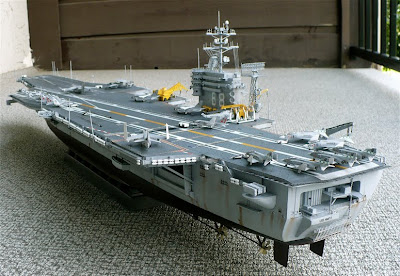 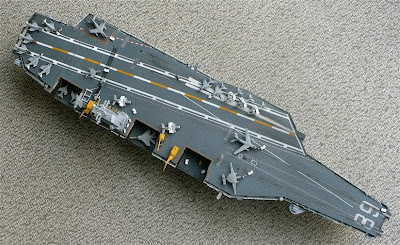 Here are some images of Trumpeter/White Ensign's 1/350 scale U.S.S. Nimitz.
This was a fun model although I wish that Trumpeter would have provided more aircraft. Oh well I've ordered more but they're taking forever to come in.

USS Nimitz (CVN-68) is a supercarrier in the United States Navy, the lead ship of her class. She is one of the largest warships in the world. She was laid down, launched and commissioned as CVAN-68, but was redesignated CVN 68 (nuclear-powered multimission aircraft carrier) on 30 June 1975 as part of the fleet realignment of that year.

The ship was named for World War II Pacific fleet commander Chester W. Nimitz, who was the Navy’s last fleet admiral. Unlike all subsequent Nimitz class carriers, Nimitz only uses her namesake's surname. She is also the first carrier of her class and the most recent supercarrier not to be named for someone who held elective office in the United States.

Nimitz was homeported at Naval Station Norfolk until 1987, when she was relocated to Puget Sound Naval Shipyard in Bremerton, Washington. After her mid-life overhaul and nuclear reactor refueling in 2001, Nimitz was relocated to NAS North Island, in San Diego, California.

Nimitz home port was changed from the NAS North Island, to Everett, Washington. This move is expected to save the Navy $100 million.

USS Nimitz first deployed to the Mediterranean on 7 July 1976 with Carrier Air Wing 8 embarked in company with the nuclear powered cruisers USS South Carolina and USS California. In November 1976, Nimitz was awarded the Battle "E" from Commander, Naval Air Force U.S. Atlantic Fleet, for being the most efficient and foremost aircraft carrier in the Atlantic Fleet. The cruise was uneventful, and the carrier returned to Norfolk, Virginia on 7 February 1977.

A second uneventful Mediterranean cruise was conducted from 1 December 1977 to 20 July 1978. The third deployment began on 10 September 1979 to the Mediterranean. The ship moved to the Indian Ocean in response to the Iran hostage crisis in which the U.S. Embassy in Tehran, Iran was overtaken and 52 hostages were held. (During this trip, the ship took part in the shooting of the movie The Final Countdown and played a central role in the film.) After four months on station, Operation Evening Light was launched from Nimitz's decks in an attempt to rescue the U.S. Embassy staff. The mission was aborted after a helicopter crashed at a refueling point in the Iranian desert. The ship finally returned home 26 May 1980, having spent 144 days at sea.

Good job. I think the cover is good with this number of aircraft

I was on the Carl Vinson once; it's absolutely unbelievable how huge these things are.

It was kind of anticlimactic that the helm itself was the size of a small yacht's.

Huge! I knew someone who was a fighter pilot on the Nimitz a few years ago.