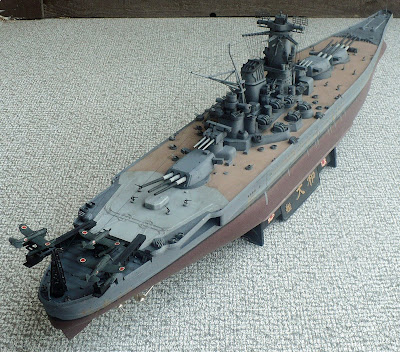 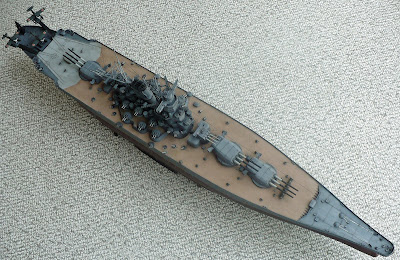 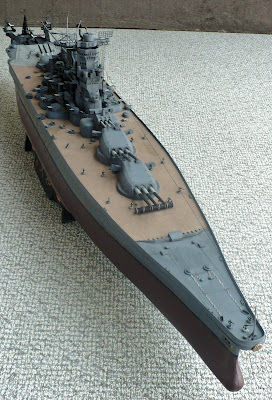 The Yamato-class battleships (大和型戦艦 Yamato-gata senkan?) were battleships of the Imperial Japanese Navy (IJN) constructed and operated during World War II. Displacing 72,000 long tons (73,000 t) at full load, the vessels were the heaviest and most powerfully armed battleships ever constructed. The class carried the largest naval artillery ever fitted to a warship, nine 460-millimetre (18.1 in) naval guns, each capable of firing 2,998-pound (1,360 kg) shells over 26 miles (42 km). Two battleships of the class (Yamato and Musashi) were completed, while a third (Shinano) was converted to an aircraft carrier during construction.

Due to the threat of American submarines and aircraft carriers, both Yamato and Musashi spent the majority of their careers in naval bases at Brunei, Truk, and Kure—deploying on several occasions in response to American raids on Japanese bases—before participating in the Battle of Leyte Gulf in October 1944, as part of Admiral Kurita's Centre Force. Musashi was sunk during the course of the battle by American carrier airplanes. Shinano was sunk ten days after her commissioning in November 1944 by the submarine USS Archer-Fish, while Yamato was sunk in April 1945 during Operation Ten-Go.

On the eve of the Allies' occupation of Japan, special-service officers of the Imperial Japanese Navy destroyed virtually all records, drawings, and photographs of or relating to the Yamato-class battleships, leaving only fragmentary records of the design characteristics and other technical matters. The destruction of these documents was so efficient that until 1948 the only known images of the Yamato and Musashi were those taken by United States Navy aircraft involved in the attacks on the two battleships. Although some additional photographs and information, from documents that were not destroyed, have come to light over the years, the loss of the majority of written records for the class has made extensive research into the Yamato-class somewhat difficult. Because of the lack of written records, information on the class largely came from interviews of Japanese officers following Japan's surrender. However, in October 1942, based upon a special request from Adolf Hitler, German Admiral Paul Wenneker, attached to the German Naval Attache in Japan, was allowed to inspect a Yamato class battleship while it was undergoing maintenance in a dockyard, at which time Admiral Wenneker cabled a detailed description of the warship to Berlin. On 22 August 1943, Erich Groner, a German Navy historian, and author of the book Die Deutschen Kriegschiffe, 1815-1945, was shown the report while at the "Führer Headquarters", and was directed to make an "interpretation" and then prepare a "design sketch drawing" of the Japanese battleship. The material was preserved by Erich Groner's wife, Mrs. H. Groner, and submitted to publishers in the 1950s.

Nice, but how was the build? How is this model in terms of accuracy and parts fitting?

How was the build? That's difficult to say as I built this back in the early 90's
From what I recall the parts went together quite easily though I seem to recall a lot of flash.
As for the detail I found it rather mediocre, though the airplanes weren't bad.
I remember having to research to rigging pattern at a library.
This kit was designed more for radio control and less for display.