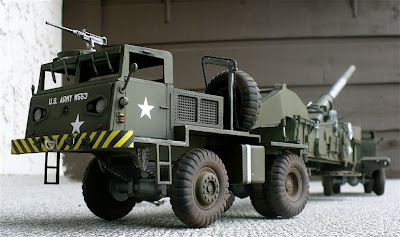 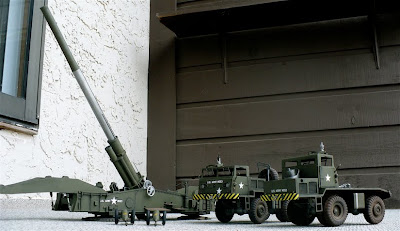 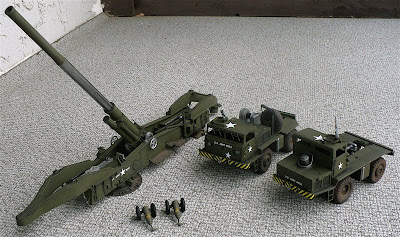 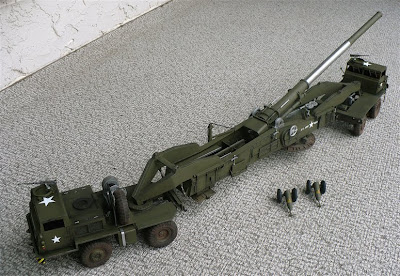 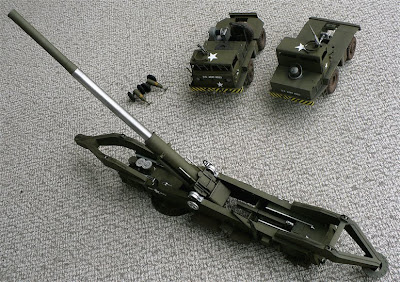 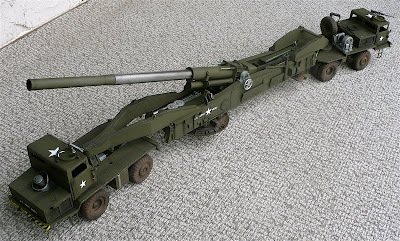 Here are some images of Renwal/Monogram/Revell 1/32 scale M65 Atomic Cannon.
This is the rerelease of the original 1957 kit from Renwal. The original kit I'm led to understand can fetch up to $1000. This one though, about $60.

From Wikipedia"
The M65 Atomic Cannon, often called Atomic Annie, was a towed artillery piece built by the United States and capable of firing a nuclear device. It was developed in the early 1950s, at the beginning of the Cold War, and fielded by 1953 in Europe and Korea.

Picatinny Arsenal was tasked to create a nuclear capable artillery piece in 1949. Robert Schwartz, the engineer who created the preliminary designs, essentially scaled up the 240mm shell (then the maximum in the arsenal) and used the German K5 railroad gun as a point of departure for the carriage. (The name "Atomic Annie" likely derives from the nickname "Anzio Annie" given to a German K5 gun which was employed against the American landings in Italy.) The design was approved by the Pentagon, largely through the intervention of chief of the Ballistics Section of the Ordnance Department’s Research and Development Division, Samuel Feltman, and a three-year developmental effort was begun. The project proceeded quickly enough to produce a demonstration model to participate in Dwight Eisenhower's inaugural parade in January of 1953.

The cannon was transported by two specially designed tractors, both capable of independent steering in the manner of some extra-long fire engines. Each of the tractors was rated at 375 hp, and the somewhat awkward combination could achieve speeds of 35 miles an hour and negotiate right turns on 28 ft wide, paved or packed roads. The artillery piece could be unlimbered in 15 minutes and then returned to traveling configuration in 15 minutes more.

On May 25, 1953 at 8:30am local time, the Atomic Cannon was tested at Nevada Test Site (specifically Frenchman Flat) as part of the Upshot-Knothole series of nuclear tests. The test--codenamed Grable--was attended by then Chairman of the Joint Chiefs of Staff Adm. Arthur W. Radford and Secretary of Defense Charles E. Wilson; it resulted in the successful detonation of a 15 kt shell (warhead W9) at a range of 7 miles. This was the first and only nuclear shell to be fired from a cannon.

Subsequent to the successful test, there were at least 20 of the cannons manufactured at Watervliet and Watertown Arsenals, at a cost of $800,000 each. They were deployed overseas to Europe and Korea, often continuously shifted around to avoid being detected and targeted by opposing forces. Due to the size of the apparatus, their limited range, the development of nuclear shells compatible with existing artillery pieces (the W48 for the 155mm and the W33 for the 203mm), and the development of rocket and missile based nuclear artillery, the M65 was effectively obsolete soon after it was deployed. However, it remained a prestige weapon and was not retired until 1963.

Those old Renwal kits are pretty cool eh? Have you ever seen "Trinity and Beyond - the Atomic Bomb Movie"? It contains footage of this thing going off and the resultant explosion. As a side note... the movie is narrated by William Shatner. His voice adds a bit of pizzaz to the presentation I think.

Thanks Dave - I've posted a snippet of that very documentery on this post.

"Only girls fight with swords anymore. Real men use cannons!"

Ha! If I would have turned on the volume while watching that snippet I would have known it was indeed "Trinity"!

I think I would like to get one of the cannon kits.

Spectacular piece. Do not know

well I'm a fan of the late Gerald Vincent Bull, but this gun is amazing, as you work to make it, congratulations.

I saw that one! Brilliant! I am a bit of a fiend for BBC comedy, but I'm from the generation that knows Hugh Laurie as 'House' before Black Adder and Fry & Laurie.

If you haven't already seen it yet, I've really been enjoying a Steve Coogan series called 'Saxondale' about an old 70's roadie in his golden years. The outro music is Hocus Pocus by Focus so you know it's good!

I love "A Bit Of Fry And Laurie". Have you seen Jeeves and Wooster?
I'll definitely give Saxondale a look thanks.

Woaa! Never seen that kit before, nice build. That's a nice piece for your collection.

Thanks Ludo - Neither did I until a couple of weeks ago.