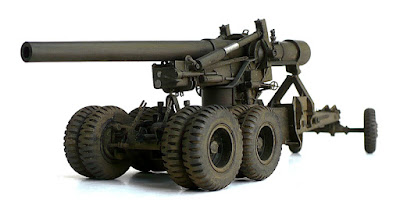 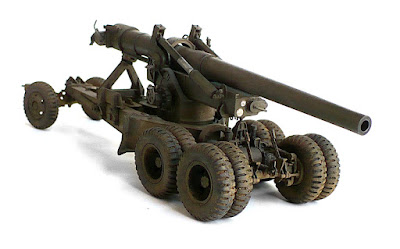 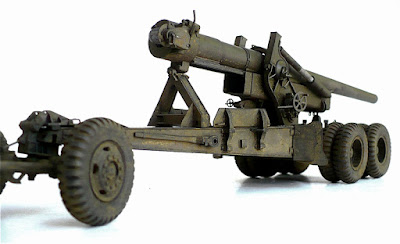 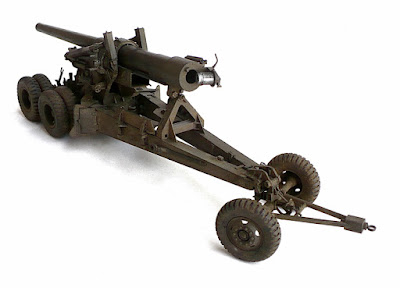 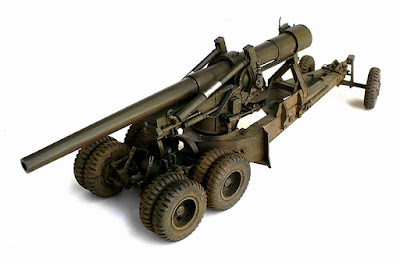 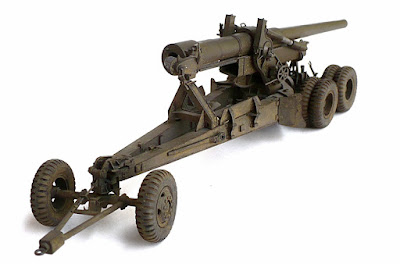 From Wikipedia"
The 155mm Long Tom was a 155 millimeter caliber field gun developed and used by the United States mililtary. It was produced in M1 and M2 variants (later known as the M59). Developed to replace the Canon de 155mm GPF, the gun was deployed as a heavy field weapon during World War II and the Korean War, and also classed as secondary armament for seacoast defense. The gun could fire a 45.36 kg (100 lb) shell to a maximum range of 22 km (13.7 mi), with an estimated accuracy life of 1,500 rounds.
The Long Tom was also adopted by a number of other nations, including the United Kingdom, Austria, Israel, and the Netherlands.
Before entering World War I, the United States was poorly equipped with heavy artillery. To address this problem a number of foreign heavy artillery guns were adopted, including the Canon de 155 mm GPF. After the end of the war development work began in the United States on a design to improve upon the existing models of heavy gun and carriage. A number of prototypes were produced in the 1920s and 1930s, but the projects were put on hold due to lack of funds. In 1938 the 155 mm Gun T4 on Carriage T2 was finally adopted as 155 mm gun M1 on Carriage M1.

The new gun design used a barrel similar to the earlier 155 mm GPF, but with an Asbury breech that incorporated a vertically-hinged breech plug support. This type of breech used an interrupted-thread breech plug with a lock that opened and closed the breech by moving a single lever. The ammunition for the 155 mm gun was "separate-loading", that is with the shell and the powder charge are packaged, shipped and stored separately. The shell is lifted into position behind the breach and then rammed into the chamber to engage the shell's rotating band into the barrel rifling.
Ramming the shell home is followed by loading a number of powder bags, as required for the desired range. The powder charge could be loaded in up to seven charge settings. Once the powder is loaded, the breech plug is closed and locked, and a primer is placed in the breech plug's firing mechanism. After setting the elevation and azimuth, the gun is ready to fire. The firing mechanism is a device for initiating the ammunition primer. The primer then sets off the igniter which ignites the propelling charge of the ammunition. A continuous-pull lanyard first cocks the firing pin, then fires the primer when pulled.
The gun was developed into M1A1 and M2 variants. After World War II, the United States Army re-organized, and the gun was re-designated as the M59.
The gun carriage provides a stable, yet mobile, base for the gun. The new split-trail carriage featured an eight-wheel integral two-axle bogie and a two-wheel limber that supported the trails for transport. The carriage was a two-piece design. The upper carriage included the side frames with trunnion bearings that supported the recoil mechanism that carried the gun cradle, slide and gun tube. The upper carriage also incorporated the elevating and azimuth gearing. The upper carriage pivoted in azimuth on the lower carriage. The lower carriage included the transport suspension and the split-trail that stabilized and absorbed recoil when the gun was fired.
After the gun was placed in a firing position with the gun pointing in the desired direction, the trails were lowered to the ground and the limber was removed. The carriage wheels would then be raised using built-in ratcheting screw-jacks, lowering the gun carriage to the ground. Once on the ground, the limber-end of the trail legs were separated to form a wide "vee" with its apex at the center of the carriage pivot point. A recoil spade at the limber-end of each trail leg required a correctly positioned hole to be dug for the spade, which was attached to the trail end, to transmit the recoil from gun carriage through the trails and into the earth. This made the gun very stable and assisted its accuracy. The removable spades were transported in brackets on the trail legs.
The carriage M1 and M2 were shared with the 8 inch Howitzer M1, differing only in the gun tube, sleigh, cradle, recoil and equilibrators, weight due to the heavier barrel.

The Long Tom saw combat for the first time in North African Campaign on December 24, 1942, with "A" Battery of the 36th Field Artillery Battalion. Eventually it equipped about 49 battalions, including 40 in the European Theater and 7 in the Pacific. The preferable prime mover was initially the Mack NO 6×6 7½ ton truck; from 1943 on it was replaced by the tracked M4 High Speed Tractor.
A small number of Long Tom guns were authorised for supply via lend lease channels, to the United Kingdom (184) and France (25). However, the authorised establishment of British batteries (excluding training units), including four batteries from the Dominion of Newfoundland, totalled 88 guns.
Posted by -Warren Zoell at 10:01 PM