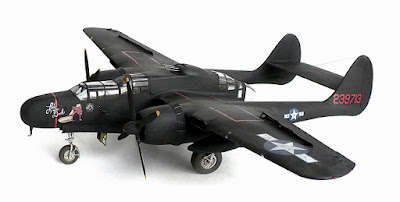 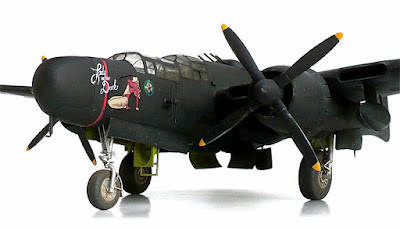 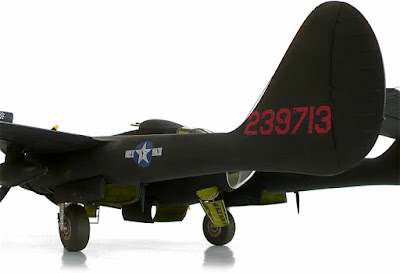 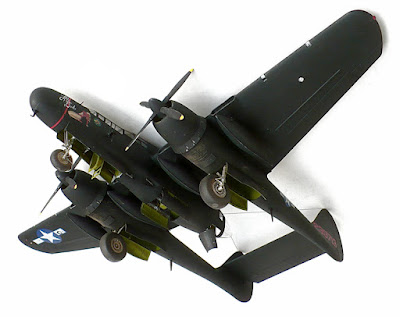 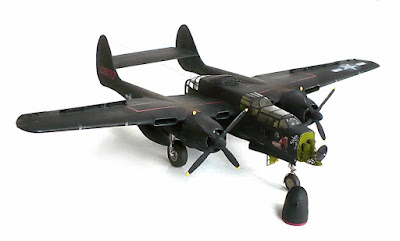 Here are some more images of the Hobby Boss 1/32 scale Northrop P-61 B Black Widow.

From Wikipedia"
The Northrop P-61 Black Widow, named for the American spider, was the first operational U.S. military aircraft designed specifically for night interception of opposing aircraft, and was the first aircraft specifically designed to use radar. It was an all-metal, twin-engine, twin-boom design developed during World War II. The first test flight was made on 26 May 1942, with the first production aircraft rolling off the assembly line in October 1943. The last aircraft was retired from government service in 1954.
Although not produced in the large numbers of its contemporaries, the Black Widow was effectively operated as a night-fighter by United States Army Air Forces squadrons in the European Theater, the Pacific Theater, the China Burma India Theater and the Mediterranean Theater during World War II. It replaced earlier British-designed night-fighter aircraft that had been updated to incorporate radar when it became available. After the war, the P-61 served in the United States Air Force as a long-range, all weather, day/night interceptor for Air Defense Command until 1948, and Fifth Air Force until 1950.
On the night of 14 August 1945, a P-61B of the 548th Night Fight Squadron named "Lady in the Dark" was unofficially credited with the last Allied air victory before VJ Day. The P-61 was also modified to create the F-15 Reporter photo-reconnaissance aircraft for the United States Air Force.
In March 1941, the Army/Navy Standardization Committee decided to standardize use of updraft carburetors across all U.S. military branches. The XP-61, designed with downdraft carburetors, faced an estimated minimum two-month redesign of the engine nacelle to bring the design into compliance. The committee later reversed the updraft carburetor standardization decision (the XP-61 program's predicament likely having little influence), preventing a potential setback in the XP-61's development.
The Air Corps Mockup Board met at Northrop on 2 April 1941, to inspect the XP-61 mock-up. They recommended several changes following this review. Most prominently, the four 20 mm (.79 in) M2 cannons were relocated from the outer wings to the belly of the aircraft, clustered tightly just behind the rear of the nose gear well. The closely spaced, centered installation, with two cannons stacked vertically, slightly outboard of the aircraft's centerline on each side, and the top cannon in each pair only a few inches farther outboard, eliminated the inherent drawbacks of the convergence of wing-mounted guns. Without convergence, aiming was considerably easier and faster, and the tightly grouped cannons created a thick stream of 20 mm (.79 in) projectiles. The removal of the guns and ammunition from the wings also cleaned up the wings' airfoil and increased internal fuel capacity from 540 gal (2,044 l) to 646 gal (2,445 l).
Other changes included the provision for external fuel carriage in drop tanks, flame arrestors/dampers on engine exhausts, and redistribution of some radio equipment. While all beneficial from a performance standpoint—especially the movement of the cannons—the modifications required over a month of redesign work, and the XP-61 was already behind schedule.
In mid-1941, the dorsal turret mount finally proved too difficult to install in the aircraft, and was changed from the General Electric ring mount to a pedestal mount like that used for the upper turrets in Boeing B-17 Flying Fortresss, Consolidated B-24 Liberators, North American B-25 Mitchells, Douglas A-20s and other bombers. Following this modification, the turret itself became unavailable, as operational aircraft, in this case the Boeing B-29 Superfortress, were ahead of experimental aircraft in line for the high-demand component. For flight testing, engineers used a dummy turret.
During February 1942, subcontracting manufacturer Curtiss notified Northrop that the C5424-A10 four-bladed, automatic, full-feathering propeller Northrop had planned for use in the XP-61 would not be ready for the prototype rollout or the beginning of flight tests. Hamilton Standard propellers were used in lieu of the Curtiss props until the originally planned component became available.
The XP-61's weight rose during construction of the prototype, to 22,392 lb (10,157 kg) empty and 29,673 lb (13,459 kg) at takeoff. Engines were R-2800-25S Double Wasp radials; turning 12 ft 2 in diameter Curtiss C5425-A10 four-blade propellers, both rotating counterclockwise when viewed from the front. Radios included two command radios, SCR-522As, and three other radio sets, the SCR-695A, AN/APG-1, and AN/APG-2. Central fire control for the gun turret was similar to that used on the B-29, the General Electric GE2CFR12A3.

On 3 October 1950, the P-61C was transferred to Park Ridge, Illinois where it was stored along with other important aircraft destined for eventual display at the museum. The aircraft was moved temporarily to the museum's storage facility at Chicago's O'Hare International Airport, but before the museum could arrange to ferry the aircraft to Washington, D.C. the National Advisory Committee for Aeronautics asked to borrow it. In a letter to museum director Paul E. Garber dated 30 November 1950, NACA director for research I.H. Abbott described his agency's "urgent" need for the P-61 to use as a high-altitude research craft. Garber agreed to an indefinite loan of the aircraft, and the Black Widow arrived at the Ames Aeronautical Laboratory, at Naval Air Station Moffett Field in California, on 14 February 1951. When NACA returned the aircraft to the Smithsonian in 1954 it had accumulated only 530 total flight hours. From 1951 to 1954 the Black Widow was flown on roughly 50 flights as a mothership, dropping recoverable swept-wing test bodies as part of a National Advisory Committee for Aeronautics program to test swept-wing aerodynamics. NACA test pilot Donovan Heinle made the aircraft's last flight when he ferried it from Moffett Field to Andrews Air Force Base, arriving on 10 August 1954. The aircraft was stored there for seven years before Smithsonian personnel trucked it to the museum's Garber storage facility in Suitland, Maryland. In January 2006 the P-61C was moved into Building 10 so that Garber's 19 restoration specialists, three conservationists and three shop volunteers could work exclusively on the aircraft for its unveiling at the Steven F. Udvar-Hazy Center on 8 June. The aircraft was restored to its configuration as a flight test aircraft for swept-wing aeronautics, so the armament and turret were not replaced. A group of former P-61 air crews were present at the aircraft's unveiling, including former Northrop test pilot John Myers.