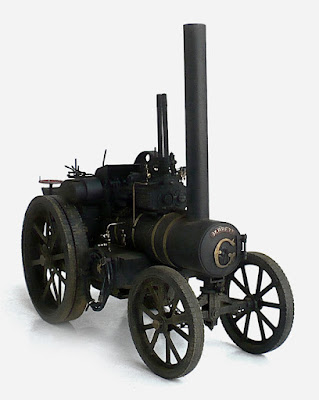 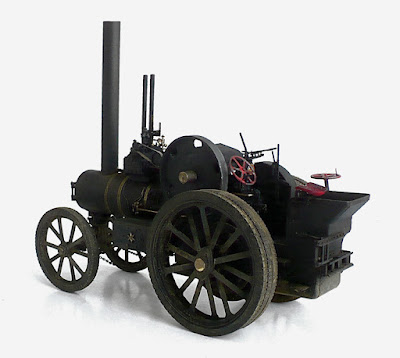 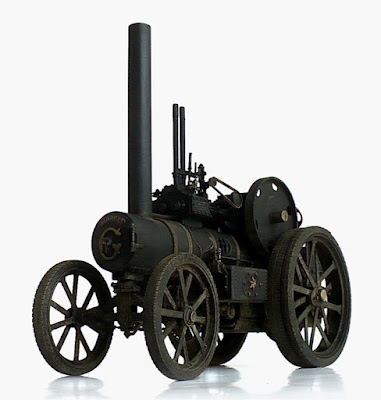 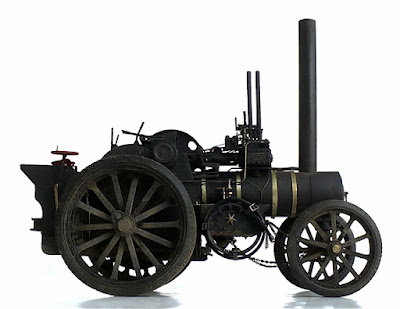 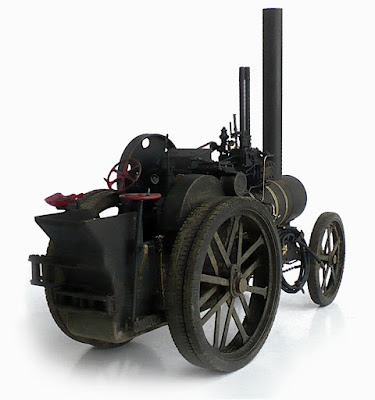 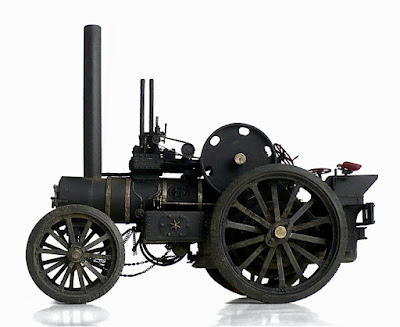 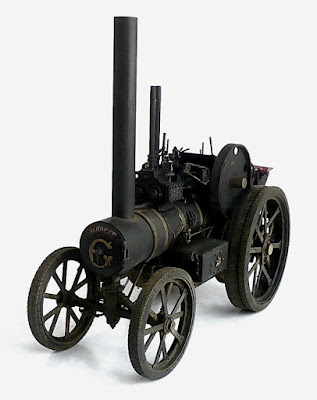 Here are some images of Entex's 1/16 scale 1919 Garrett Steam Tractor.
This kit came as the "The Pendle Princess", and though the kit was sealed the decals were too old for use. This is a common problem when it comes to older kits. So what does one do? Answer - build a Garret steam tractor for what they were intended. For farm use!! Besides I find "The Pendle Princess" to be a little too fabulous for my tastes. LOL!
I replaced the fancy stack with a taller straight pipe. I came across a couple of pictures where this kind of adjustment was made. I would guess that it was probably done to redirect the smoke away from the driver's face.

From Wikipedia"
Richard Garrett & Sons was a manufacturer of agricultural machinery, steam engines and trolleybuses. Their factory was Leiston Works, in Leiston, Suffolk, England. The company was founded by Richard Garrett in 1778.
The company was active under its original ownership between 1778 and 1932.
In the late 1840s, after cultivating a successful agricultural machine and implement business, the company began producing portable steam engines. The company grew to a major business employing around 2,500 people. Richard Garrett III, grandson of the company's founder, visited The Great Exhibition of 1851 in London, where he saw some new American manufacturing ideas. Richard Garrett III introduced flow line production – a very early assembly line - and constructed a new workshop for the purpose in 1852. This was known as 'The Long Shop' on account of its length. A machine would start at one end of the Long Shop and as it progressed through the building it would stop at various stages where new parts would be added. There was also an upper level where other parts were made; they would be lowered over a balcony and then fixed onto the machine on the ground level. When the machine reached the end of the shop, it would be complete.
In 1914, following a major fire at the works, it was decided to build a new factory on land that had been owned as a demonstration farm next to the station. From then on the sites were always known as the "Old Works" and the "New Works".
The company joined the Agricultural & General Engineers (AGE) combine in 1919, and the combine entered receivership in 1932.
The company was purchased by Beyer Peacock in 1932 after the collapse of AGE. The business continued as Richard Garrett Engineering Works until the works finally closed in 1981.
Today, part of the old works is preserved as the Long Shop Museum. Some of the offices are used as flats but the rest of that site has been demolished and the land used for housing. Some of the New Works is still used as industrial units while the offices have been converted to flats and more built on the site, known as Colonial House.
Posted by -Warren Zoell at 1:19 PM

Gorgeous device and fine execution.
You have a lot of different scale, but it is understandable reasons
I like these antique-equipment, as well as the cars, and also earth construction equipment.

So do I. Construction model kits are hard though.