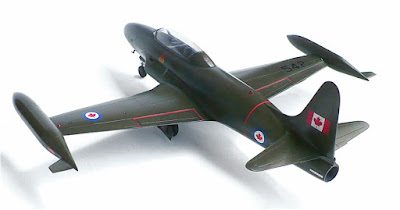 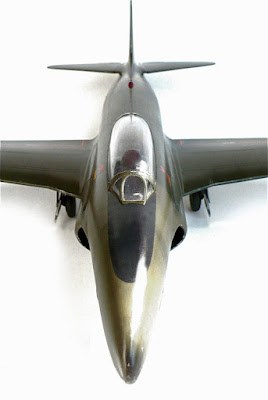 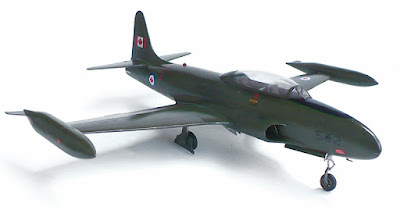 From Wikipedia"
The Canadair CT-133 Silver Star (company model number CL-30) was the Canadian license-built version of the Lockheed T-33 Shooting Star jet trainer aircraft, in service from the 1950s to 2005. The Canadian version was powered by the Rolls-Royce Nene 10 turbojet, whereas the Lockheed production used the Allison J33.

The Canadair CT-133 is the result of a 1951 contract to build T-33 Shooting Star Trainers for the Royal Canadian Air Force (RCAF). The powerplant would be a Rolls-Royce Nene 10 turbojet instead of the Allison J33 used by Lockheed in the production of the original T-33. A project designation of CL-30 was given by Canadair and the name was changed to Silver Star. The appearance of the CT-133 is very distinctive due to the large fuel tanks usually carried on each wingtip.
A total of 656 CT-133 aircraft were built by Canadair.
The CT-133 entered service in the RCAF as its primary training aircraft for fighter/interceptors. Its name is an interesting take of the USAF designation "Shooting Star." The RCAF named it the "Silver Star," in honour of Canada's (and the British Empire's) first flight of a heavier-than-air craft, the AEA Silver Dart. The designation of the Silver Star in the Canadian Forces was CT-133.
The CT-133 was reliable and had forgiving flight properties. Its service life in the RCAF (and later the Canadian Forces) was extremely long. One of the more unusual roles it played was as an aerobatic demonstration aircraft, the RCAF's Red Knight. Although the aircraft stopped being used as a trainer in 1976, there were still over 50 aircraft in Canadian Forces inventory in 1995. The youngest of these airframes was then 37 years old and had exceeded its expected life by a factor of 2½. During this period, the Canadair T-33 was employed in communication, target towing and enemy simulation.
The final Canadair Silver Star Mk. 3 was retired from the Aerospace Engineering Test Establishment at CFB Cold Lake, Alberta, Canada where it was used as an ejection seat testbed after 46 years of service. CT-133 number 133648 was delivered to Mountain View CFD on 26 April 2005. Having been built in March 1959 as [CT-133] 21648, and had 11,394.6 flight hours at the time of retirement. It has been sold on the civil market, along with fifteen other CT-133s. These aircraft will join the fifty others on the U. S. Civil Register and continue to fly as a part of the living legacy of the early jet age.
Posted by -Warren Zoell at 5:41 PM