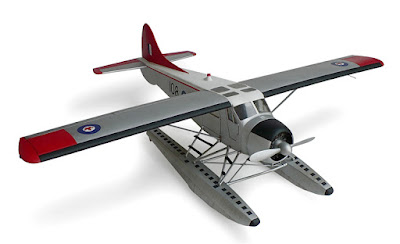 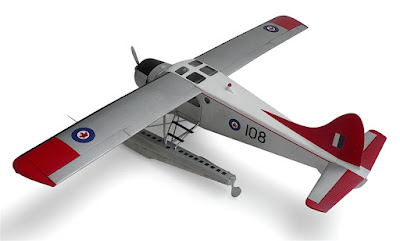 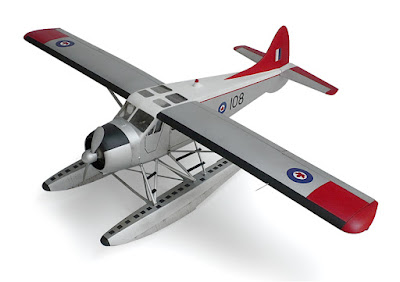 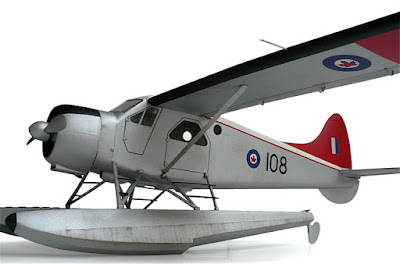 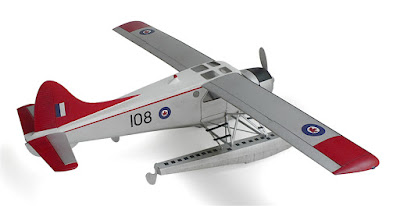 Here are some images of Ceder Creek Model's 1/24 scale de Havilland Canada DHC-2 Beaver .
This is one of the cheapest kits ever created. However with a bit of effort it produces a fairly reasonable... Na! who am I kidding? This kit was made of a very soft plastic, there was no cockpit and no windows, only decals for windows. So as a result I had to cut out the window holes and make some panes (which was a real pain). Build a cockpit to which I won't profess to its accuracy. Plus different decal markings all together as the ones that came with the kit were dull, dull, dull. Mind you I shouldn't complain, it only cost me $20.

The de Havilland Canada DHC-2 Beaver is a single-engined, high-wing, propeller-driven, STOL aircraft developed by de Havilland Canada, primarily known as a bush plane. It is used for cargo and passenger hauling, aerial application (crop dusting and aerial topdressing), and has been widely adopted by armed forces as a utility aircraft. The United States Army purchased several hundred; nine DHC-2s are still in service with the U.S. Air Force Auxiliary (Civil Air Patrol) for search and rescue. A Royal New Zealand Air Force Beaver supported Sir Edmund Hillary's expedition to the South Pole. Over 1,600 Beavers were produced until 1967 when the original line shut down.
Due to its success, the Royal Canadian Mint commemorated the Beaver on a special edition Canadian quarter in November 1999.

After the war, de Havilland Canada management turned to the civilian market for work, aware that military contracts were unlikely to guarantee business. The company had recently hired Punch Dickins, a famous bush pilot, as Director of Sales who began an extensive program of collecting requests from other pilots, to understand what they needed in a new aircraft. Almost without variation, the pilots asked for tremendous extra power and STOL performance, in a design that could be easily fitted with wheels, skis or floats. When de Havilland engineers noted that this would result in poor cruise performance, one pilot replied "You only have to be faster than a dog sled". Other suggestions were seemingly mundane but important in the bush plane world; full-sized doors were installed on both sides of the aircraft so it could be easily loaded no matter which side of a dock it tied up on. The doors were also made wide enough to allow for a 45 Imperial gallon drum to be rolled up into the aircraft.
On September 17, 1946, de Havilland officially put together a design team consisting of Fred Buller, Dick Hiscocks, Jim Houston and W. Jakimiuk, led by Phil Garratt. The new aircraft was designed to be all-metal (unlike older designs like the famous Noorduyn Norseman), using "steel from the engine to the firewall, heavy aluminum truss frames with panels and doors throughout the front seat area, lighter trusses toward the rear and all monocoque construction aft". At the time de Havilland Canada was still a British-owned company and there were plans to fit the evolving design with a British engine. This limited power, so the wing area was greatly increased in order to maintain STOL performance. When Pratt & Whitney Canada offered to supply war-surplus 450 hp (340 kW) Wasp Jr engines at a low price, the aircraft ended up with extra power as well as the original long wing. The result was unbeatable STOL performance for an aircraft of its size.
After much testing and with adjustments and improvements, the innovative airplane was ready for the sales circuit. Since de Havilland Canada aircraft were all named after animals, it was decided that the new bush plane was much like the hard-working beaver. The first flight of the DHC-2 Beaver was in Downsview, Ontario by Second World War flying ace Russell Bannock on August 16, 1947. The first production aircraft was delivered to the Ontario Department of Lands and Forests, a design partner, in April 1948.
Initial sales were slow, perhaps two or three a month but as the plane was demonstrated sales started to improve. A key event in the Beaver's history occurred the next year, when the US Army started looking for a new utility aircraft to replace their Cessnas. The competition quickly boiled down to the Beaver and the Cessna 195 but the Beaver outperformed the 195 and with the outbreak of the Korean War, led to orders for hundreds of aircraft. Soon orders increased from around the world. When production finally ceased in 1967, 1,657 DHC-2 Beavers had been built.
The Beaver was designed for flight in rugged and remote areas of the world. Its short takeoff and landing capability made it ideal for areas normally only accessible by canoe or foot. Because it often flies to remote locations, often in cold climates, its oil reservoir filler is located in the cockpit and oil can be filled in flight. A series of upgrades to the basic design were incorporated. One major customer introduced the use of flat steps replacing the earlier tubes, a feature that is now almost universal. In 1987, the Canadian Engineering Centennial Board named the DHC-2 one of the top ten Canadian engineering achievements of the 20th century.
At one point in its production, plans to license and build the type in New Zealand were proposed. The remaining tooling was purchased by Viking Air of Victoria, Canada, which manufactures replacement parts for most of the early de Havilland line. On 24 February 2006, Viking purchased the type certificates from Bombardier Aerospace for all the original de Havilland designs. The ownership of the certificates gives Viking the exclusive right to manufacture new Beavers. Viking now sells a remanufactured and rebuilt DHC-2T Turbo Beaver upgraded with a Pratt & Whitney Canada PT6A-34 680 hp (507 kW) turboprop engine. With a maximum gross takeoff weight increased to 6,000 lb (2,700 kg) it can carry 2,450 lb (1,110 kg) of freight. However, Viking Turbo Beavers are only rebuilt from existing air frames, and are not new-builds, unlike Viking's own DHC-6 Series 400 Twin Otter, which is manufactured from a completely new airframe.

Despite the fact that production ceased in 1967, hundreds of Beavers are still flying—many of them heavily modified to adapt to changes in technology and needs. Kenmore Air of Kenmore, Washington provides Beaver and Otter airframes with zero-hour fatigue-life ratings, and owns dozens of supplemental type certificates (STCs) for aircraft modifications. These modifications are so well known and desirable in the aviation community, rebuilt Beavers are often called "Kenmore Beavers" or listed as having "Kenmore mods" installed.
The original Wasp Jr radial engine of the Beaver is long out of production, so repair parts are getting harder to find. Some aircraft conversion stations have addressed this problem by replacing the piston engine with a turboprop engine such as the PT6. The added power and lighter installed weight, together with greater availability of kerosene fuel instead of high-octane aviation gasoline, make this a desirable modification, but at a high financial cost.
The Beaver was deployed by the British Army Air Corps during the Troubles at least until 1979 for photo-reconnaissance missions. One of them was hit seven times by machine gun fire in South County Armagh, near the border with the Republic of Ireland in November 1979, while taking valuable photos of an IRA checkpoint. The border crossing where the action took place was known by the British Army as "Beaver Junction" since then.
Operators of significant numbers of piston-Beavers in early 2008 include Air Saguenay and Harbour Air in Canada and Kenmore Air in the USA.
Harrison Ford owns a DHC-2 Beaver and has called it his favourite among his entire fleet of private aircraft.
The United States military continues to operate two DHC-2s at the United States Naval Test Pilot School, where they are used to instruct students in the evaluation of lateral-directional flying qualities and to tow gliders.
The DHC-2 Beaver is sometimes used by skydiving operators due to its good climb rate. When fitted with a roller door that can be opened in flight, it can quickly ferry eight skydivers to 13,000 ft (4,000 m).
Stolairus Aviation of Kelowna, British Columbia has developed several modifications for the DHC-2 including a STOL Kit which modifies the wing with a contoured leading edge, flap-gap seals, wing fences and drooped wingtips for increased performance. Stolairus has also developed a Wing Angle Kit which changes the incidence of the wing.
Advanced Wing Technologies of Vancouver, British Columbia has developed and certified a new wing for the DHC-2. The FAA Supplemental Type Certificate also raises the aircraft's gross weight to 6,000 lb (2,700 kg). So far, at least two Beavers have been so modified.
Posted by -Warren Zoell at 6:53 PM

Email ThisBlogThis!Share to TwitterShare to FacebookShare to Pinterest
Labels: Canada