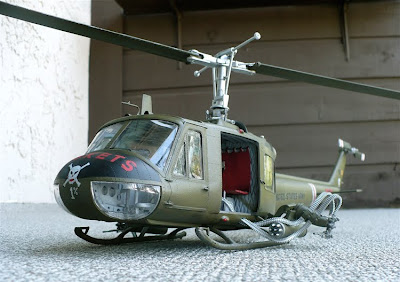 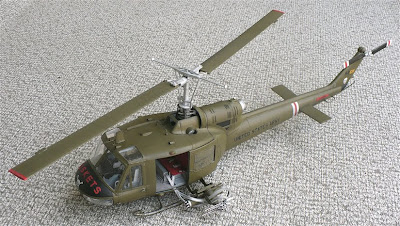 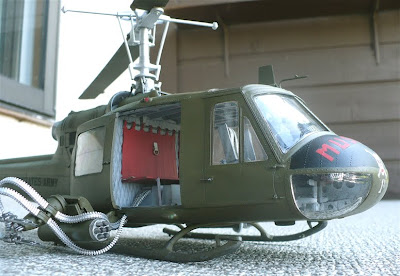 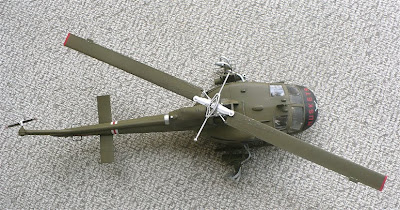 Here are some images of Revell's 1/24 scale Bell UH-1B Iroquois gun ship as seen in the television series Tour Of Duty.
With the exception for the seat belts this kit was built SOB.

The Bell UH-1 Iroquois is a military helicopter powered by a single, turboshaft engine, with a two-bladed main rotor and tail rotor. The helicopter was developed by Bell Helicopter to meet the United States Army's requirement for a medical evacuation and utility helicopter in 1952, and first flew on 20 October 1956. Ordered into production in March 1960, the UH-1 was the first turbine-powered helicopter to enter production for the United States military, and more than 16,000 have been produced worldwide.

The first combat operation of the UH-1 was in the service of the U.S. Army during the Vietnam War. The original designation of HU-1 led to the helicopter's nickname of Huey. In September 1962, the designation was changed to UH-1, but Huey remained in common use. Approximately 7,000 UH-1 aircraft saw service in Vietnam.

In 1952, the Army identified a requirement for a new helicopter to serve as medical evacuation (MEDEVAC), instrument trainer and general utility aircraft. The Army determined that current helicopters were too large, underpowered, or were too complex to maintain easily. In November 1953, revised military requirements were submitted to the Department of the Army. Twenty companies submitted designs in their bid for the contract, including Bell Helicopter with the Model 204 and Kaman Aircraft with a turbine-powered version of the H-43. On 23 February 1955, the Army announced its decision, selecting Bell to build three copies of the Model 204 for evaluation, designated as the XH-40.

The HU-1A (later redesignated UH-1A) first entered service with the 101st Airborne Division at Fort Campbell, Kentucky, the 82nd Airborne Division, and the 57th Medical Detachment. Although intended for evaluation only, the Army quickly pressed the new helicopter into operational service and Hueys with the 57th Medical Detachment arrived in Vietnam in March 1962.[13]

The UH-1 has long been a symbol of US involvement in Southeast Asia in general and Vietnam in particular, and as a result of that conflict, has become one of the world's most recognized helicopters. In Vietnam primary missions included general support, air assault, cargo transport, aeromedical evacuation, search and rescue, electronic warfare, and later, ground attack. During the conflict, the craft was upgraded, notably to a larger version based on the Model 205. This version was initially designated the UH-1D and flew operationally from 1963.

During service in the Vietnam War, the UH-1 was used for various purposes and various terms for each task abounded. UH-1s tasked with a ground attack or armed escort role were outfitted with rocket launchers, grenade launchers, and machine guns. As early as 1962, UH-1s were modified locally by the companies themselves, who fabricated their own mounting systems.These gunship UH-1s were commonly referred to as Frogs or Hogs if they carried rockets, and Cobras or simply Guns if they had guns. UH-1s tasked and configured for troop transport were often called Slicks due to an absence of weapons pods. Slicks did have door gunners, but were generally employed in the troop transport and medevac roles.

Towards the end of the conflict, the UH-1 was tested with TOW missiles, and two UH-1B helicopters equipped with the XM26 Armament Subsystem were deployed to help counter the 1972 Easter Invasion. USAF Lieutenant James P. Fleming piloted a UH-1F on a 26 November 1968 mission that earned him the Medal of Honor.

UH-1 troop transports were designated by Blue teams, hence the nickname for troops carried in by these Hueys as the Blues. The reconnaissance or observation teams were White teams. The attack ships were called Red teams. Over the duration of the conflict the tactics used by the military evolved and teams were mixed for more effective results. Purple teams with one or two Blue slicks dropping off the troops, while a Red attack team provided protection until the troops could defend themselves. Another highly effective team was the Pink Recon/Attack team, which offered the capability of carrying out assaults upon areas where the enemy was known to be present but could not be pinpointed.

During the course of the war, the UH-1 went through several upgrades. The UH-1A, B, and C models (short fuselage, Bell 204) and the UH-1D and H models (stretched-fuselage, Bell 205) each had improved performance and load-carrying capabilities. The UH-1B and C performed the gunship, and some of the transport, duties in the early years of the Vietnam War. UH-1B/C gunships were replaced by the new AH-1 Cobra attack helicopter from 1967 to late 1968. The increasing intensity and sophistication of NVA anti-aircraft defenses made continued use of UH-1 gunships impractical, and after Vietnam the Cobra was adopted as the Army's main attack helicopter. Devotees of the UH-1 in the gunship role cite its ability to act as an impromptu dustoff if the need arose, as well as the superior observational capabilities of the larger Huey cockpit, which allowed return fire from door gunners to the rear and sides of the aircraft.

The US Army phased out the UH-1 with the introduction of the UH-60 Black Hawk, although the Army UH-1 Residual Fleet has around 700 UH-1s that were to be retained until 2015, primarily in support of Army Aviation training at Fort Rucker and in selected Army National Guard units. Army support for the craft was intended to end in 2004. In 2009, Army National Guard retirements of the UH-1 accelerated with the introduction of the UH-72 Lakota.

Nice scale for this Huey, and well done.

This one brings back a ton of memories. I've made more than a few landings in "hot" LZ's in these things. Truth is, they rarely ever actually landed, they hovered and we had to jump out.

You know Pat as I was building this the thought did cross my mind that it might bring back memories for you.