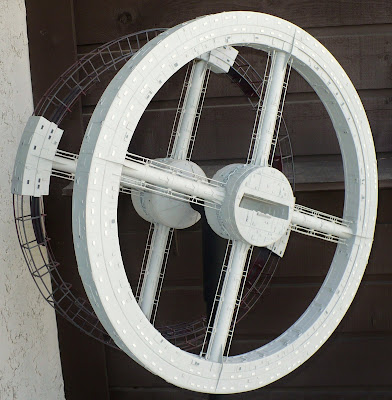 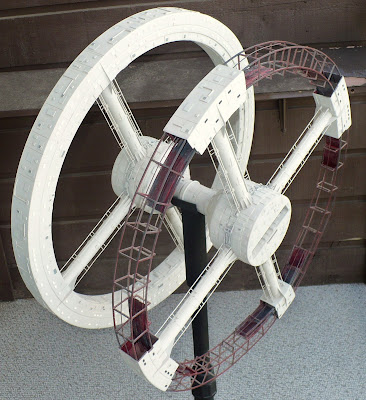 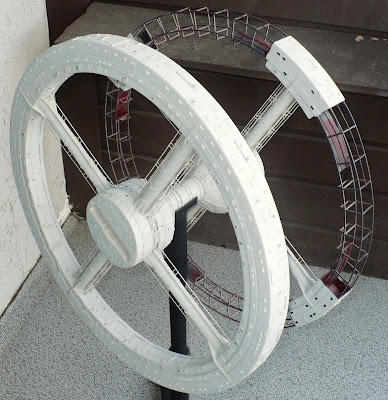 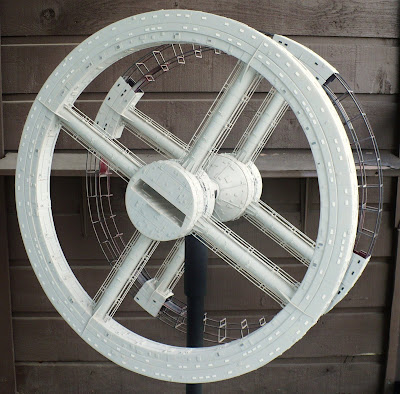 Here are some images plus a composite of my scratch built model of Space Station Five from 2001 A Space Odyssey. You can read my article on 2001 here. The materials I used for this model were a 4'x8' sheet of 1mm styrene from Cadillac Plastics here in Edmonton, 1/2 inch PVC electrical pipe (this is what determined its size), the windows are from a coil book binder punch and various types of sheet and strip styrene from Evergreen Scale Models for structure and detail. The model itself has a two foot diameter and as I mentioned before my calculations were taken directly off the TV screen. One does what is necessary to get the job done I suppose.
From Wikipedia "
Space Station V is a fictional space station seen in the movie 2001: A Space Odyssey. Operational, it is a large, international, rotating wheel space station used as a transfer point from Low Earth orbit to the moon and other planets. It also functions as an orbital hotel, mostly operated by Hilton Hotels. Rotation of the station provides artificial gravity for people aboard the station. The station contains two docking bays for docking spacecraft and is placed on its rotational axis at the opposite sides of the construction. By the time of events depicted in the film, it is still under construction, with the incomplete second wheel.
The rotating wheel depicted in the movie traces its lineage back to wheeled space station designs by Wernher von Braun and Herman Potočnik, the latter describing such a space station design in his book The Problem of Space Travel - The Rocket Motor (1928). The studio model was reported to be eight feet wide (Bizony) or six feet wide (Agel), and stuffed with tiny lights behind the windows. Due to its large size and spidery structure, the model always seemed in danger of breaking apart. Kubrick had most of the models and props used in 2001 destroyed or discarded, or stored away and inaccessible, so that they wouldn't be used in any movies not under his control. In the early 1970s, when the MGM studio in Borehamwood, England where the film was made was demolished, the model for Space Station V was dumped in a field about 20 miles from Borehamwood. It was destroyed by vandals a few days later.
Posted by -Warren Zoell at 7:56 PM

Spectacular ... never seen this model. It turns out that this was one of the movies that hit me until many years later I read the novel does not end up fully understand its meaning.

I'm glad you re-posted this model. Amazing piece of work from an great movie. I have never seen any model of this, scratch built or otherwise. I feel I should eventually give it a go. Have you ever thought of building a scale space clipper to go with it?

Thanks Dave - I have thought of it. I do have the plans for it but it's just a question of getting around to doing it. One day.

Is there a word that means better than stunning? 'cause I'd use it right now.

I'm glad you didn't a) light the thing or b) make it to the same scale as the Aurora Orion. It's hard enough to get my jaw off of the ground as it is!

I have added myself to follow your blog. You are more than welcome to visit my blog and become a follower also.

Thanks Arkonbey - I used to put in lights but I stopped. They always seem to fail eventually and they're a pain.

Thanks covnitkepr1 I'll certainly give a look.