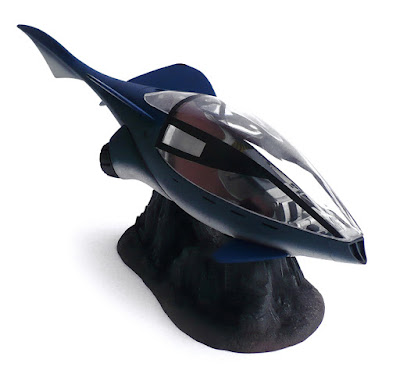 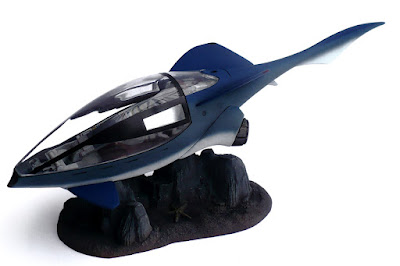 Here are some images of Monogram's 1/20 scale Stinger submarine from the SeaQuest TV series.

From Wikipedia"
seaQuest DSV was an American science fiction television series created by Rockne S. O'Bannon. It originally aired on NBC between 1993 and 1996. In its final season, it was renamed seaQuest 2032. Set in "the near future", seaQuest DSV originally mixed high drama with realistic scientific fiction. It originally starred film star Roy Scheider as Captain Nathan Bridger, designer and commander (for the first two seasons) of the titular naval submarine seaQuest DSV 4600. Other actors who comprised the show's original cast were Jonathan Brandis as Lucas Wolenczak, a teenaged computer genius, Stephanie Beacham as Kristin Westphalen, the chief medical officer and head of the seaQuest science department and Don Franklin as Commander Jonathan Ford, the first mate of the submarine. Michael Ironside starred as Captain Oliver Hudson, captain of the vessel during the third season. Steven Spielberg expressed interest in the project and served as one of the show's executive producers during the first two seasons.
Filming of the first season was marked by disputes between the producers and NBC, changes in the production staff, and even an earthquake. The second season contained changes in the cast, as well as disputes between cast members and producers, while the third season introduced a new lead actor and title. While initially popular, the series began to decline in ratings throughout its run, and was abruptly canceled in the middle of its third season.
Roy Scheider narrated the voiceover during the opening credits of each first-season episode:

The 21st century: mankind has colonized the last unexplored region on Earth; the ocean. As captain of the seaQuest and its crew, we are its guardians, for beneath the surface lies the future. 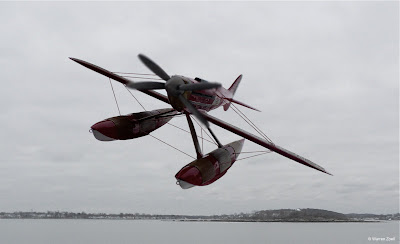 Images of the model can be seen here.
Posted by -Warren Zoell at 12:58 PM 2 comments: 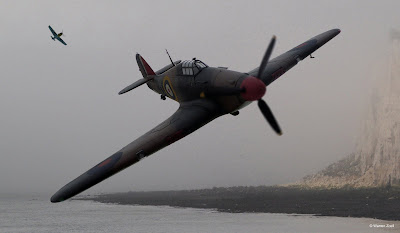 Here is my composite image of Airfix's 1/24 scale  Hawker Hurricane Mk 1 Composite in a low level pass past the white cliffs of Dover England whilst being pursued by a Messerschmitt BF 109 E3.

Images of the Hawker Hurricane model can be seen here. 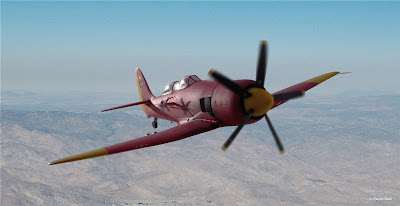 Messerschmitt ME 262 A 1a Composite 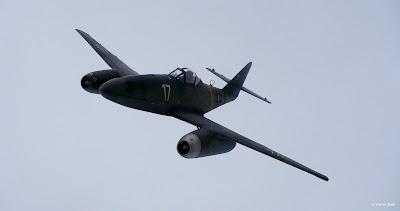 Here is my composite image of Trumpeter's 1/32 Messerschmitt ME 262 A 1a against a grey sky, which is common here in sunny Alberta.

Images of the model can be seen here.
Posted by -Warren Zoell at 1:32 PM 2 comments: 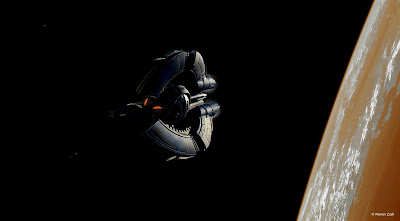 Here is my composite image of Revell's Droid Tri-Fighter from Star Wars "Revenge of the Sith" cruising past a tangerine coloured planet.

Images of the model can be seen here.
Posted by -Warren Zoell at 12:51 PM 2 comments: 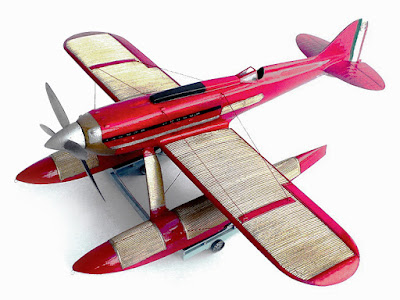 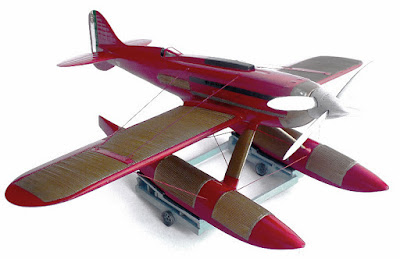 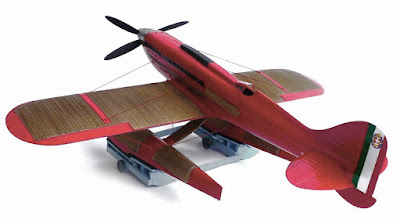 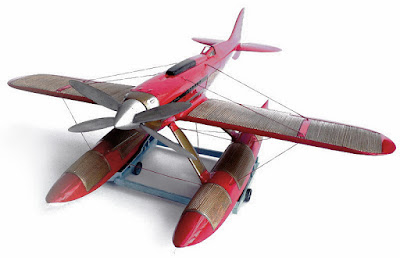 This resin kit is from a few years back so as a result it has some of those "garage kit" qualities.

As a result the kit required a little extra work, but in the end produced a decent example.

The Macchi M.C. 72 was an experimental seaplane designed and built by the Italian aircraft company Macchi Aeronautica. The M.C. 72 held the world speed record for all aircraft for five years. In 1933 and 1934, it set a world record speed for propeller-driven seaplanes which still stands to this day.

The Macchi M.C. 72 was one of a series of seaplanes developed by Macchi Aeronautica. An earlier model, the M.24 was a twin-engine flying boat armed with machine guns and capable of carrying a torpedo. Later in the 1920s, Macchi focused on speed and on winning the Schneider Trophy. In 1922, the company hired aircraft designer Mario Castoldi to design high-speed aircraft.

In 1926, the company won the trophy with the M.39 which attained a top speed of 396 km/h (246 mph). Further aircraft: the M.52, M.52R and the M.67, were designed and built but victory in the Schneider races kept eluding the Italians. Castoldi then designed the ultimate racing seaplane, the M.C. 72, a single-seater aircraft with two floats.

The M.C. 72 design was unique with a fuselage partly metal to the cockpit and wood monocoque bolted to the front tubular portion by four bolts. The streamlined nose contours enclosed an oil tank with its outside wall exposed to the airstream. The wing was all metal with flat tubular water radiators smoothly faired into the wings. The twin pontoons had three smoothly-faired radiators on the outer surfaces, the forward radiator for water and the centre and rear radiators for oil cooling. The float struts also featured water radiators and another radiator was fitted during hot conditions under the fuselage running from cockpit to tail.

The M.C. 72 was built in 1931 with the idea of competing for what turned out to be the final Schneider Trophy race, but due to engine problems, the M.C. 72 was unable to compete.

Instead of halting development, Macchi continued work on the M.C. 72. Benito Mussolini personally took an interest in seeing development of the M.C. 72 continue and directed state funds to the company.

For two years, the M.C. 72 suffered from many mechanical defects, as well as the loss of two test pilots who died trying to coax world class speed out of the M.C. 72 (first Monti and then Bellini). The final design of M.C. 72 used double, contra-rotating propellers powered by a modified FIAT AS-6 engine V24 engine generating some 1,900-2,300 kW (2,500-3,100 hp) (thanks to supercharging).

After 35 flights, the engines were overhauled in preparation for a record attempt. The aircraft finally lived up to expectations when it set a new world speed record (over water) on 10 April 1933, with a speed of 682 km/h (424 mph). It was piloted by Warrant Officer Francesco Agello (the last qualified test pilot). Not satisfied, development continued as the aircraft's designers thought they could break 700 km/h (430 mph) with the M.C. 72. This feat was in fact achieved on 23 October 1934, when Agello piloted the M.C. 72 for an average speed of 709 km/h (440 mph) over three passes. This record remains (as of 2012) the fastest speed ever attained by a piston-engine seaplane. After this success, the M.C.72 was never flown again.

The M.C. 72 held the world speed record for all aircraft for five years. For comparison, the record holder for a land-based aircraft was held (for a time) by the Hughes H-1 Racer with a top speed of only 566 km/h (352 mph). Then in 1939, two German racing aircraft passed the M.C. 72. The first was a Heinkel He 100 which reached the speed of 746 km/h (463 mph). The second was a Messerschmitt Me 209 which set a new world speed record of 756 km/h (469 mph) in August – just days before the start of World War II. The current world speed record for a piston-engine aircraft is 528.33 mph (850.26 km/h) set by a heavily modified American Grumman F8F Bearcat named Rare Bear over 3 km in 1989. However, the M.C. 72 record still stands today as the world's fastest propeller-driven seaplane.

One M.C. 72, the aircraft that took the world record, survives. It is on display at the Italian Air Force Museum, near Rome.
Posted by -Warren Zoell at 10:35 AM 6 comments:

Posted by -Warren Zoell at 1:43 PM No comments: 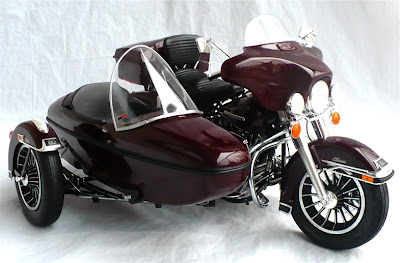 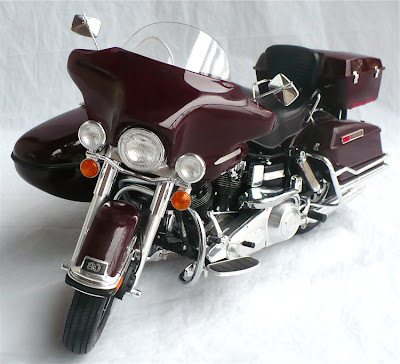 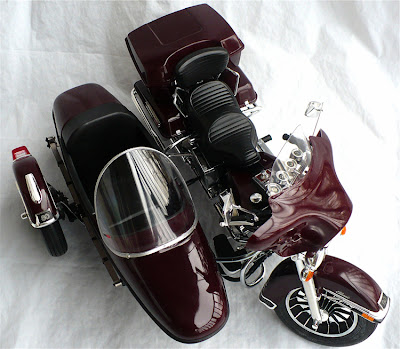 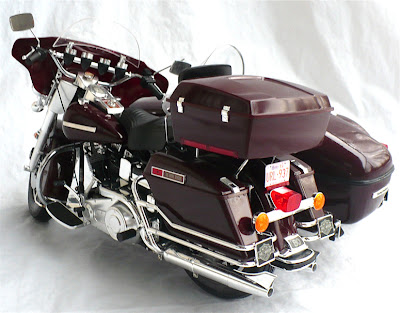 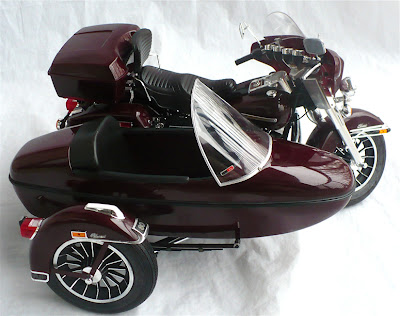 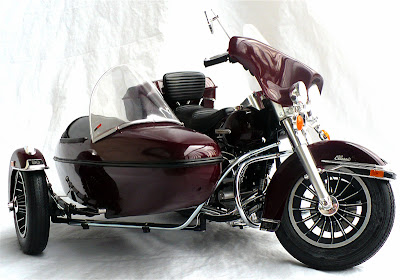 Here are some images of Tamiya's 1/6 scale 1980 AMF/Harley Davidson FLH Classic With Sidecar.
The only major thing I changed on this kit was that I lowered the bikes windshield and went with a single colour instead of the two tone pattern.

The FLT Tour Glide was introduced in 1979. Sold alongside the existing FLH Electra Glide, the FLT had a larger frame with rubber engine mounts, a five-speed transmission, the 80 cu in (1,300 cc) engine, and a frame-mounted fairing. In order that the FLT frame, which was larger and heavier than the large and heavy FLH frame, would handle acceptably, the front forks were given radical steering geometry which had them mounted behind the steering head, with the frame behind the steering head being recessed to allow adequate steering lock.
The FLHT was introduced in 1983. This was an Electra Glide based on the FLT Tour Glide frame, but using the Electra Glide "batwing" fairing instead of the Tour Glide frame-mounted fairing.
Except for the base FLH, all 1984 FLs were equipped with the new rubber-mounted Evolution engine and a five-speed transmission.
All "Shovelhead" engines were discontinued by the 1985 model year. In that year, the four-speed solid-engine-mount FLH was modified to accept rubber mounting and the Evolution engine. The FLH was discontinued in 1986; all Touring models thereafter used the FLT/FLHT frame. Ironically, the FLT Tour Glide, which introduced the current Touring frame, was dropped from the lineup in 1996. The frame-mounted Tour fairing would return with the FLTR Road Glide in 1998.
The Evolution engine was replaced by the Twin Cam 88 engine on all large-frame Harley-Davidson motorcycles in 1999. 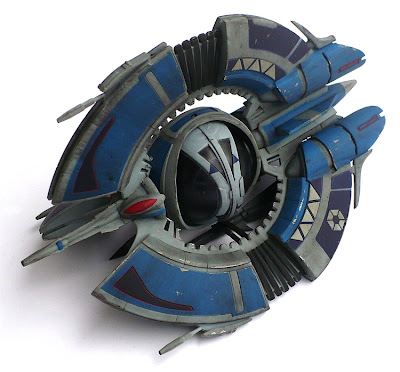 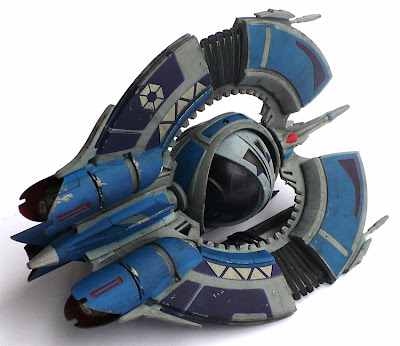 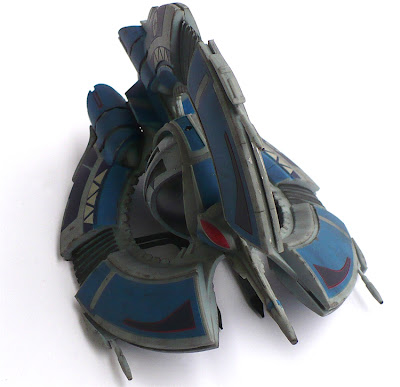 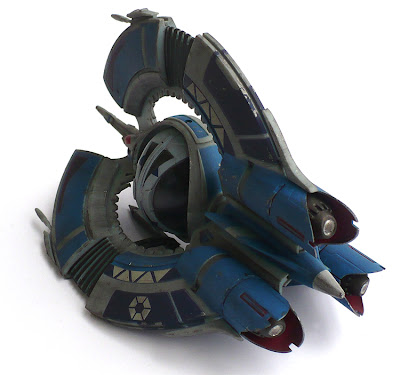 Here are some images of Revell's Droid Tri-Fighter from Star Wars "Revenge of the Sith".
This is another of Revell's prepainted kits, but surprisingly the paint job wasn't too bad.
All I had to do with this model was weathering, a couple of coats of flat coat and a few paint touch ups.
I've noticed that this kit came with a tinted central sphere while I've seen other kits come with a clear sphere. I don't know why this is.
The model took about 3 hours to complete.

From Wookiepedia"
The droid tri-fighter, also known as the tri-droid fighter or simply tri-fighter, was a deadly Confederacy droid starfighter designed as a fast, agile and powerful space-superiority starfighter, built to excel in dogfighting. It would be used in large numbers in the later parts of the Clone Wars.

The droid tri-fighter was designed by the Colicoid Creation Nest—makers of the deadly droideka—and manufactured by Colla Designs and Phlac-Arphocc Automata Industries. The droid's ridged, three-armed design was based on the skull features of a fearsome predator native to the planet Colla IV.
The bracing arms surrounded the fighter's battle droid pilot housed in a rotating, gyroscopic core. The droid tri-fighter had three independent thrusters, providing it with great agility, and a powerful reactor and control/communications transceiver that gave the craft unusual range for a fighter drone.
It was armed with one heavy laser cannon protruding from the central ball, and a light laser cannon for each of the three arms. They could fire independently or together and could slightly tilt on rails to improve its deadly aim. Two to six missiles of variable payloads were housed within each arm. The nose-like cannon made the droid tri-fighter similar in appearance to the DSD1 dwarf spider droid also used by the Confederacy.
The droid tri-fighter was capable of deploying buzz droids via discord missiles fixed to the underside, and quickly became rival to the ARC-170 starfighter and the Alpha-3 Nimbus-class V-wing starfighter. Although it could not outrun the Eta-2 Actis-class light interceptor favored by the Jedi, it was bulkier and more heavily armed, making it a challenge for even the best living starpilots to overcome.

The droid tri-fighter was introduced into the Confederate Navy relatively late in the conflict, and its usage would further deplete Trade Federation coffers. One of its first recorded uses was on Praesitlyn, where they fought against the T-19 starfighters of the Praesitlyn Defense Force. Tri-fighters were also deployed at Sullust, Boz Pity, Saleucami, Dathomir and Belderone. It would prove troublesome for even Jedi pilots, as evidenced when three tri-fighters came close to overcoming Jedi ace Saesee Tiin before being taken out by Anakin Skywalker.
Many tri-fighters fought during the Battle of Coruscant, where they decimated ARC-170 squadrons. Swarms of them also fought in the battle within the city, harassing Jedi and clone pilots.Following the execution of the Separatist Council by Darth Sidious's new apprentice, Darth Vader, these units were de-activated. At least one derelict tri-fighter was located in an Imperial junkyard during the Galactic Civil War.