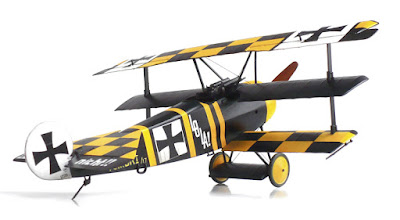 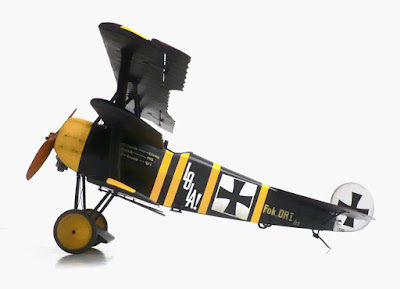 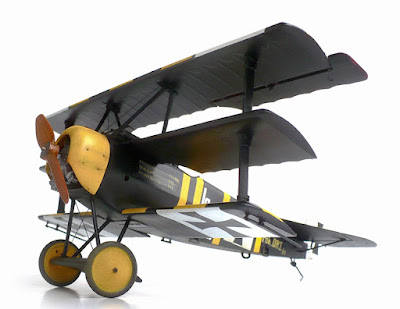 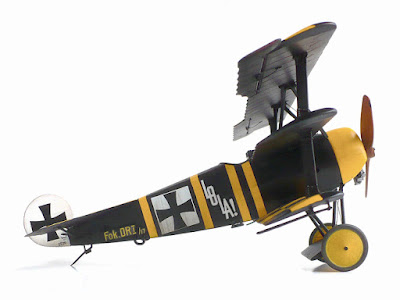 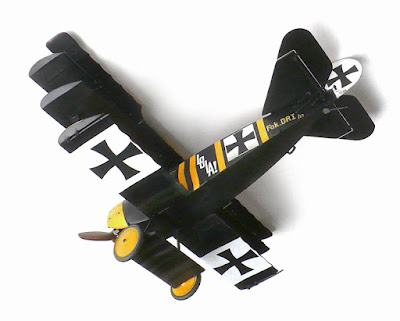 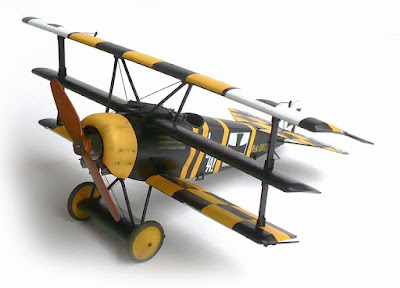 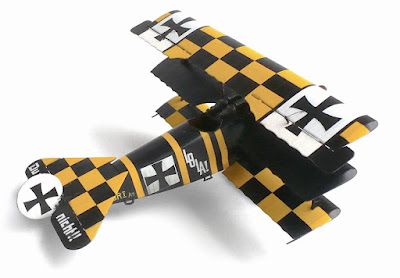 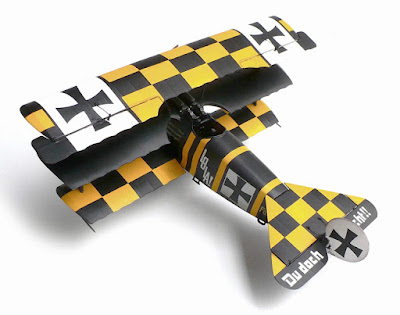 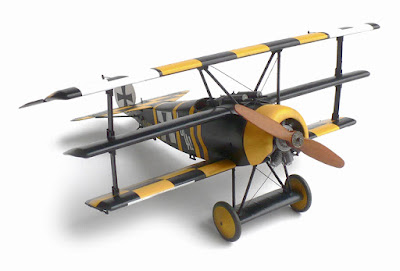 Here are some images of Revells 1/28 scale Fokker DR.1 in the markings of LOLA! flown by the fictional Character Ernst Kessler (Udet?) excellently portrayed by Bo Brundin from the Movie "The Great Waldo Pepper" 1975.
To make this model into LOLA! I not only had to create my own decals but I had to scratch out a new tail skid, take out the front section of the cowling as well as extend it by 1/4 inch. The checker board and stripe patterns are mask painted.
The literal Translation of "Du doch nicht!!"  is "Not You!!" but it has more meaning to it. Imagine saying "not you" with a smirk and a laugh. Something like a "you and what army" feel to it. This saying was also on the stabilizer of Ernst Udet's aircraft during World War One.
As far as movies go "The Great Waldo Pepper" is a good movie. Not great, but good. However when one is a 10 year old boy it becomes one of the greatest movies ever.
I hope to make more models from this movie in the future.

From Wikipedia"
The Great Waldo Pepper is a 1975 American drama film directed, produced, and co-written by George Roy Hill. Set during 1926–1931, the film stars Robert Redford as a disaffected World War I veteran pilot who missed the opportunity to fly in combat, and examines his sense of postwar dislocation in 1920s America. The cast also includes Margot Kidder, Bo Svenson, Edward Herrmann and Susan Sarandon. The Great Waldo Pepper basically depicts barnstorming activity in the 1920s and the accidents that led to aviation regulations by the Air Commerce Act.

World War I veteran Waldo Pepper (Robert Redford) feels he has missed out on the glory of aerial combat after being made a flight instructor. After the war, Waldo had taken up barnstorming to make a living. He soon tangles with rival barnstormer (and fellow war veteran) Axel Olsson (Bo Svenson).
Antagonistic at first, Waldo and Axel become partners and try out various stunts. One of these stunts, a car-to-aircraft transfer, goes wrong and Waldo is nearly killed after Axel is unable to climb high enough to clear a barn, slamming Waldo into it. Waldo then goes home to Kansas to be with on-again, off-again girlfriend Maude (Kidder) and her family. Maude, however, is not happy to see Waldo at first; because every time he returns from a barnstorming tour of the country, he is injured in some way. Eventually, however, they make up and become lovers once again. Meanwhile, Maude's brother Ezra (Ed Herrmann), a long-time friend of Waldo's since boyhood, promises to build Waldo a high-performance monoplane as soon as he is well enough to fly it. Waldo's goal is to become the first pilot in history to successfully perform an outside loop, and Ezra feels Waldo can do it with the monoplane.
In the meantime, Waldo rejoins Axel. The two eventually get a job flying for a traveling flying circus owned by Doc Dillhoefer (Philip Bruns). However, Dillhoefer's Flying Circus is in a slump, as there is very little attendance at the shows. So in an effort to attract bigger crowds, Dillhoefer hires Mary Beth (Susan Sarandon) to act as the show's new sexual attraction, in which she would climb out on the wing of an aircraft in flight wearing shredded clothes, thus allowing the wind to blow them off. But while performing this new stunt for the first time, Mary Beth freezes up on the wing, afraid to return to the cockpit. As Waldo (who did a "plane-to-plane transfer" in flight to climb aboard Mary Beth's aircraft) extends his hand to help Mary Beth back into the cockpit, she slips and falls off the wing to her death. As a result of Mary Beth's death, Waldo, Axel, and Dillhoefer are temporarily grounded by an inspector of the newly formed Air Commerce division of the federal government, Newt Potts (Geoffrey Lewis), a man from Waldo's wartime past.
Soon after, at the Muncie Fair, another tragedy occurs with the Dillhoefer Circus when Ezra (flying in place of the grounded Waldo) attempts the outside loop in the monoplane. He crashes on his third attempt, and the crowd rushes out of the stands to see the wreckage. Some of the spectators are smoking as they watch Waldo struggle to free Ezra. One of the cigarettes is flicked into gas leaking from the aircraft, igniting it. Waldo, helpless against the flames, kills Ezra with a piece of lumber. Because no one helped Waldo try to save him, Waldo goes on a rampage, jumps in one of Dillhoefer's aircraft and begins buzzing the crowd away from the wreckage and ends up crashing into a carnival area, which leads to his permanent grounding.
But that does not stop Waldo from flying for long. Waldo goes to Hollywood where Axel is working as a stuntman, and Waldo and Axel get jobs as stunt pilots in an upcoming film depicting the air battles of the Great War. Axel is cleared of his grounding and reinstated as a pilot; but being permanently grounded, Waldo has to use an alias so that he can dodge his grounding and fly in the film. Famous German air ace Ernst Kessler (Bo Brundin) has also been hired by the producers, as a consultant and to fly a Fokker Dr. I replica in the film.
During filming of a famous wartime duel, Waldo in a Sopwith Camel and Kessler in the Fokker—although their aircraft are disarmed—begin dogfighting in deadly earnest, using their aircraft as weapons, repeatedly playing chicken and colliding with each other. Eventually, Waldo damages Kessler's aircraft so badly that it's no longer airworthy, and Kessler surrenders to Waldo. Waldo and Kessler then salute each other and fly their separate ways.
The Great Waldo Pepper was a "passion project" for director George Roy Hill, who was himself a pilot. He and William Goldman had what Goldman described as "a huge falling out" during the middle of Goldman's writing the screenplay. Nevertheless, they managed to complete the project.
Frank Tallman flew the air sequences using actual aircraft – not models. Waldo flew a Standard J-1 biplane. A lot of the other aircraft in the film, including Axel's and those of Dillhoefer's, were Curtiss JN-4 biplanes. A number of de Havilland Tiger Moth biplanes, modified to look like Curtiss JN-4s, were used for the crash scenes.
The Great Waldo Pepper was filmed in Elgin, Texas. Aerial sequences were filmed at Zuehl Airfield near San Antonio, which is not too far from Fort Sam Houston, where the pioneering silent aviation classic Wings was shot in 1926-27. Several aerial scenes were also filmed over the Sebring, Florida, Airport (also known for the 12 Hours of Sebring, a Le Mans-style endurance car race). Hill, who flew as a U.S. Marine Corps cargo pilot in World War II, made sure stars Bo Svenson and Robert Redford did each sequence with no parachutes or safety harnesses. He wanted them to feel what it was like to fly vintage aircraft. Fortunately, no one was hurt during the air scenes.

The Great Waldo Pepper opened to mixed to good reviews, with the biggest praise going to the film's aerial sequences. Vincent Canby of The New York Times wrote, "'The Great Waldo Pepper' is a most appealing movie. Its moods don't quite mesh and its aerial sequences are so vivid— sometimes literally breathtaking— that they upstage the human drama, but the total effect is healthily romantic." Leonard Maltin noted that the film disappointed at the box office, and, although compared to earlier efforts such as The Sting (1973), it was director George Roy Hill's "more personal" account that "... wavers uncomfortably between slapstick and drama."
The aerial sequences staged by Frank Tallman included the climactic fight between Waldo Pepper and Kessler. The scene featuring a replica Sopwith Camel and a replica Fokker Triplane, was loosely patterned after a real dogfight between German ace Werner Voss and a flight of aircraft led by British ace James McCudden.
Due to the attention to period details and the use of actual aircraft in the flying scenes, The Great Waldo Pepper is well-regarded among aviation films, receiving a "four-star" rating by film and aviation historians Jack Hardwick and Ed Schnepf. Released in a number of home media formats, there are no extra features in the latest DVD.
Former silent screen actress Viola Dana was an honored guest at the premiere of The Great Waldo Pepper. In 1920, Dana had begun a relationship with Ormer "Lock" Locklear, a daring aviator, military veteran and budding film star, reputed to be the prototype for the character of Waldo Pepper. Locklear died when his aircraft crashed on August 2, 1920 during a nighttime film shoot for the Fox Studios feature, The Skywayman.
Posted by -Warren Zoell at 2:57 PM 2 comments: 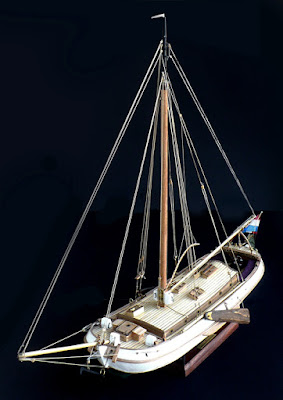 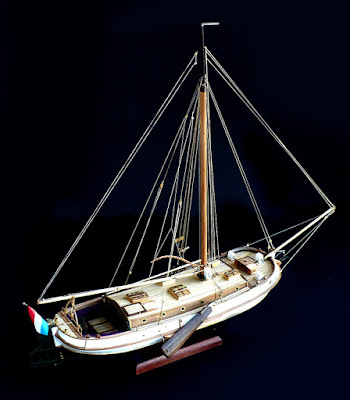 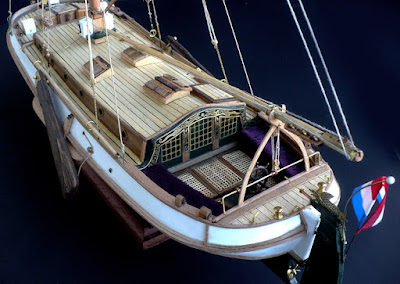 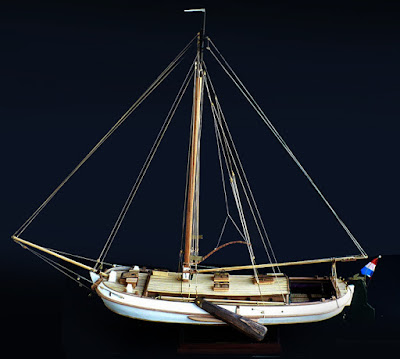 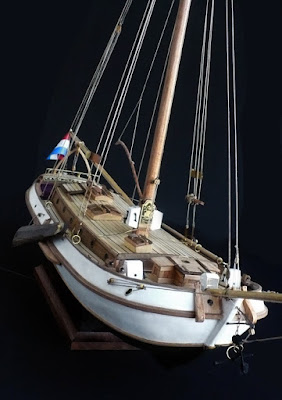 Here are some images of Authentic Models Holland's 1/24 scale Lemsteraak 'De Groene Draeck' (The Green Dragon).
I never understood the tendency of some model kit companies to name their company in English but everything else is in their own language in this case Dutch.
This kit being an older kit was more difficult than one one might come to expect. First the instructions were all in Dutch. Second the parts were only printed onto the wood and not lazer or stamp cut. So the parts had to be cut out by hand. Anyway it wasn't easy. 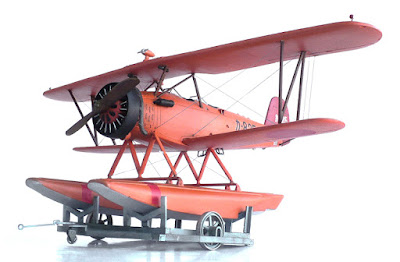 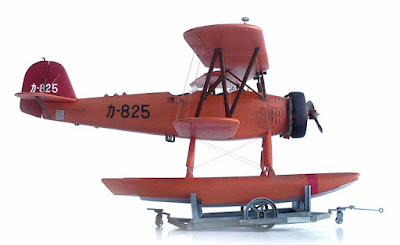 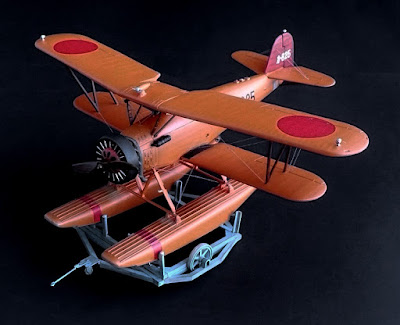 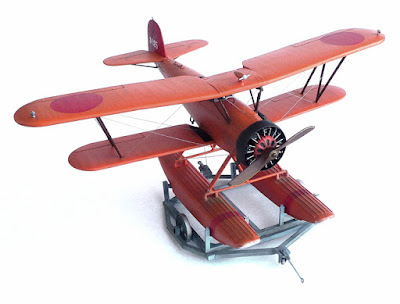 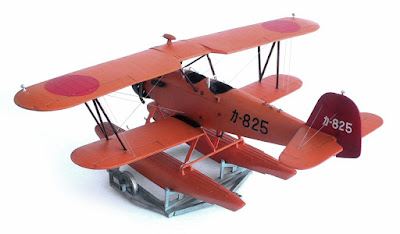 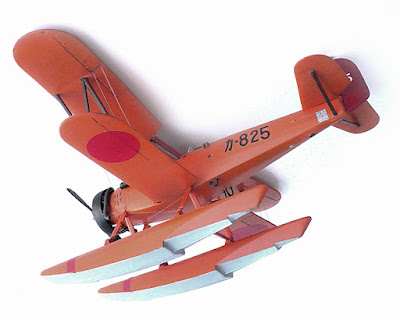 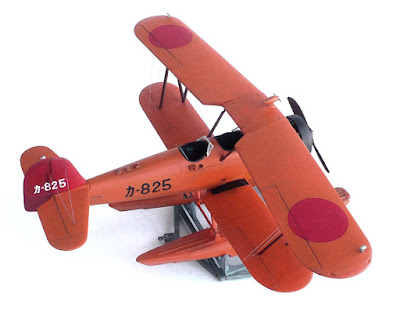 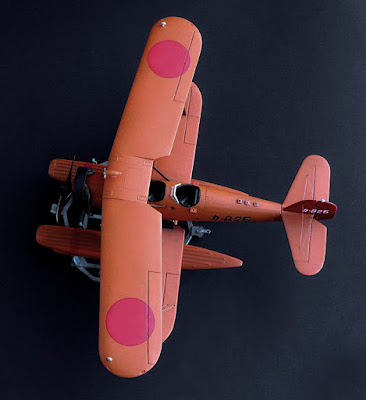 From Wikipedia"
The Yokosuka K5Y was a two-seat unequal-span biplane trainer (Allied reporting name: "Willow") that served in the Imperial Japanese Navy during World War II. Due to its bright orange paint scheme (applied to all Japanese military trainers for visibility), it earned the nickname "aka-tombo", or "red dragonfly", after a type of insect common throughout Japan.
A K5Y of the Kamikaze Special Attack Corps 3rd Ryuko Squadron was credited with sinking the destroyer USS Callaghan on July 29, 1945, the last US warship lost to kamikaze attack during the war.
The aircraft was based on the Yokosuka Navy Type 91 Intermediate Trainer, but stability problems led to a redesign by Kawanishi in 1933. It entered service in 1934 as Navy Type 93 Intermediate Trainer K5Y1 with fixed tail-skid landing gear, and remained in use throughout the war. Floatplane types K5Y2 and K5Y3 were also produced. After the initial 60 examples by Kawanishi, production was continued by Watanabe (556 aircraft built), Mitsubishi (60), Hitachi (1,393), First Naval Air Technical Arsenal (75), Nakajima (24), Nippon (2,733), and Fuji (896), for a total of 5,770. These aircraft were the mainstay of Imperial Japanese Navy Air Service's flight training, and as intermediate trainers, they were capable of performing demanding aerobatic maneuvers. Two further land-based versions, the K5Y4 with a 358 kW (480 hp) Amakaze 21A engine and the K5Y5 with a 384 kW (515 hp) Amakaze 15, were projected but never built.
Indonesian People's Security Force (the precursor of Indonesian Air Force) operated derelict aircraft against Dutch colonial rule. On July 29 1947, Indonesia using 2 units of Yokosuka K5Y (Called "Cureng/Churen" by Indonesian fighters) with one "Guntei Bomber" (Mitsubishi Ki-51 from Maguwo Air Force Base, Yogyakarta for bombing Dutch strategic positions in Ambarawa, Salatiga and Semarang. On its original plan, Nakajima Ki-43 "Hayabusa" also planned to be involved too in this operation, but cancelled as the aircraft suffered technical difficulties. It is currently on display at Jakarta.
Posted by -Warren Zoell at 12:09 PM 2 comments: 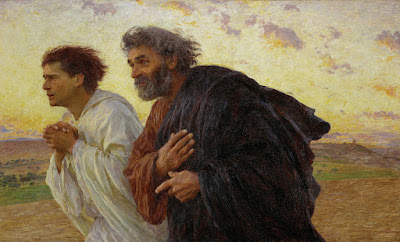 The Disciples Peter and John Running to Sepulcher on the Morning of the Resurrection, circa 1898 by Eugene Burnand.