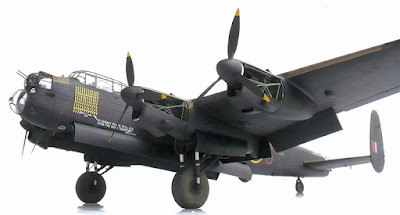 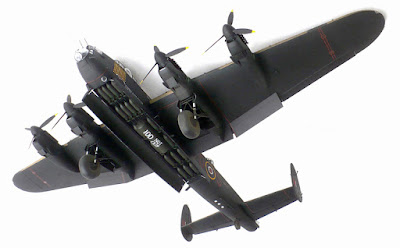 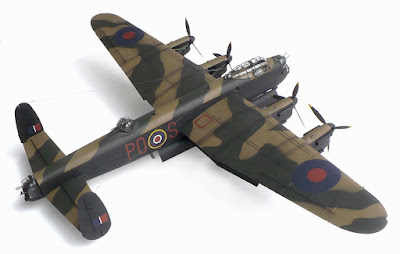 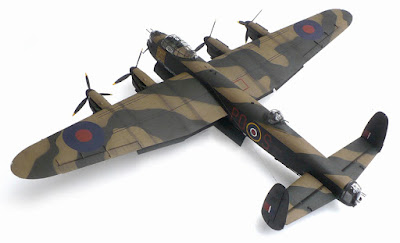 Here are some images of HK Models 1/32 scale Avro Lancaster BI.
Over all this is a pretty good kit although it had a Tamiya feel to it. The only real complaints I have is that the main instrument panel needed a bit to be desired so that had to be spruced up a bit. Plus when installing the inner nacelles it was a bit of a choir to get it seated properly so consider yourself warned. But overall it's one impressive beast when finished. One thing I love about this kit is the way the main wings slide and snap onto the fuselage. No glue required. This means that if you have to transport it you can remove the main wings before transport. This is a BI version of the famed "Sugar". It must have been converted to a BIII later on in it's career.

The Avro Lancaster is a British four-engined Second World War heavy bomber. It was designed and manufactured by Avro as a contemporary of the Handley Page Halifax, both bombers having been developed to the same specification, as well as the Short Stirling, all three aircraft being four-engined heavy bombers adopted by the Royal Air Force (RAF) during the same wartime era.
The Lancaster has its origins in the twin-engine Avro Manchester which had been developed during the late 1930s in response to the Air Ministry Specification P.13/36 for a capable medium bomber for "world-wide use". Originally developed as an evolution of the Manchester (which had proved troublesome in service and was retired in 1942), the Lancaster was designed by Roy Chadwick and powered by four Rolls-Royce Merlins and in one version, Bristol Hercules engines. It first saw service with RAF Bomber Command in 1942 and as the strategic bombing offensive over Europe gathered momentum, it was the main aircraft for the night-time bombing campaigns that followed. As increasing numbers of the type were produced, it became the principal heavy bomber used by the RAF, the RCAF and squadrons from other Commonwealth and European countries serving within the RAF, overshadowing contemporaries such as the Halifax and Stirling.
A long, unobstructed bomb bay meant that the Lancaster could take the largest bombs used by the RAF, including the 4,000 lb (1,800 kg), 8,000 lb (3,600 kg) and 12,000 lb (5,400 kg) blockbusters, loads often supplemented with smaller bombs or incendiaries. The "Lanc", as it was known colloquially, became one of the most heavily used of the Second World War night bombers, "delivering 608,612 long tons of bombs in 156,000 sorties". The versatility of the Lancaster was such that it was chosen to equip 617 Squadron and was modified to carry the Upkeep "Bouncing bomb" designed by Barnes Wallis for Operation Chastise, the attack on German Ruhr valley dams. Although the Lancaster was primarily a night bomber, it excelled in many other roles, including daylight precision bombing, for which some Lancasters were adapted to carry the 12,000 lb (5,400 kg) Tallboy and then the 22,000 lb (10,000 kg) Grand Slam earthquake bombs (also designed by Wallis). This was the largest payload of any bomber in the war.
In 1943, a Lancaster was converted to become an engine test bed for the Metropolitan-Vickers F.2 turbojet. Lancasters were later used to test other engines, including the Armstrong Siddeley Mamba and Rolls-Royce Dart turboprops and the Avro Canada Orenda and STAL Dovern turbojets. Postwar, the Lancaster was supplanted as the main strategic bomber of the RAF by the Avro Lincoln, a larger version of the Lancaster. The Lancaster took on the role of long range anti-submarine patrol aircraft (later supplanted by the Avro Shackleton) and air-sea rescue. It was also used for photo-reconnaissance and aerial mapping, as a flying tanker for aerial refuelling and as the Avro Lancastrian, a long-range, high-speed, transatlantic passenger and postal delivery airliner. In March 1946, a Lancastrian of BSAA flew the first scheduled flight from the new London Heathrow Airport.
The original Lancasters were produced with Rolls-Royce Merlin XX engines and SU carburettors. Minor details were changed throughout the production series – for example the pitot head design was changed from being on a long mast at the front of the nose to a short fairing mounted on the side of the fuselage under the cockpit. Later production Lancasters had Merlin 22 and 24 engines. No designation change was made to denote these alterations.
Posted by -Warren Zoell at 5:10 PM No comments: 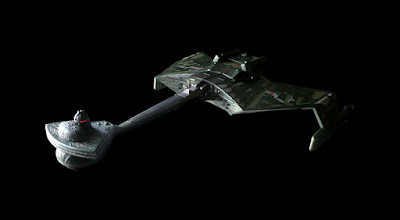 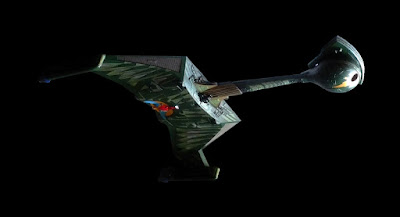 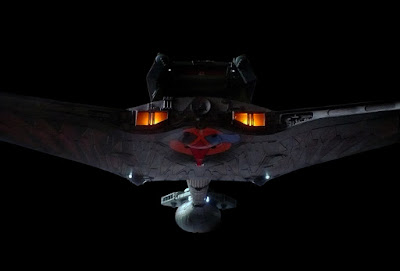 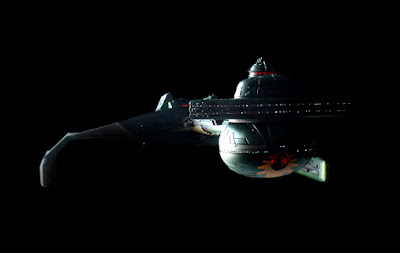 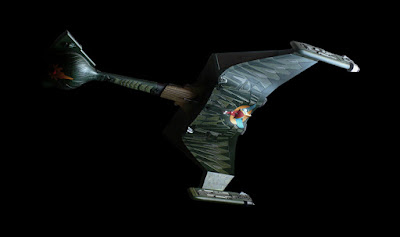 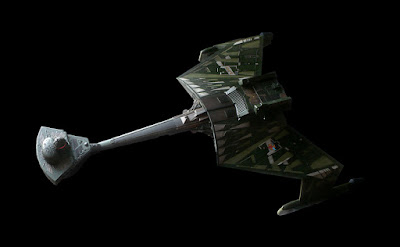 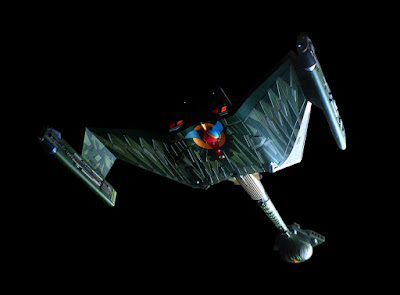 Here are some images of Polar Lights 1/350 scale Klingon K'T'inga Class Battle Cruiser from Star Trek The Motion Picture including lighting pack.
A trend I notice as of late regarding model kit companies is that lately they've been putting the painting scheme instructions on the inside walls of the box itself instead of the instructions. I hate this. It forces me to cut out sections of the box which is made of cardboard so that I can file it away with the rest of the instructions when finished. This of course takes up more room in my filing cabinets than should be necessary. I wish they would stop doing that. The model is nice though.

From Wikipedia"
An upgrade of the design used for the D7-class vessel, the K't'inga-class battlecruiser was first conceived for use in the pilot episode of Star Trek: Phase II. When Phase II was abandoned, the story of the pilot was adapted for Star Trek: The Motion Picture, where three K't'inga-class battlecruisers are used in the opening scenes. Andrew Probert is credited as the designer of the K't'inga model in its design patent, while the class name was given by Gene Roddenberry in his novelization of The Motion Picture. Although sharing a nearly identical configuration with the D7-class, the primary difference in the K't'inga-class is the level of detail on the hull, enhanced to make the model appear more believable to viewers on screen. The configuration of the vessel's impulse engines also differs from that of the D7-class. The K't'inga model was later revisited for Star Trek VI: The Undiscovered Country, in which Industrial Light & Magic enhanced the original studio model with glowing engine nacelles and changed the color from muted gray-greens to light gray with gold accents and maroon paneling. ILM's alterations were meant to "contrast... with the Enterprise-A, which is very smooth and monochromatic and cool, while this Klingon ship is very regal and ostentatious and warm". A CGI version of the ship, with a slightly modified nacelle design, was created for the later seasons of Deep Space Nine; this particular model was erroneously used to represent older Klingon ships in the Voyager episode "Prophecy" and the Enterprise episode "Unexpected".[1] The original studio model for the K't'inga-class battlecruiser was later sold in a 2006 Christie's auction for US$102,000.
The K't'inga-class battlecruiser has similar armaments to the D7-class battlecruiser, with a photon torpedo launcher in the forward module and six disruptor cannons. In addition, the ship possesses an aft torpedo launcher and can fire a powerful disruptor beam from the forward module. The Voyager episode "Flashback" also shows the K't'inga-class using concussion weapons. Unlike the D7-class, the K't'inga-class uses a cloaking device. In The Next Generation episode "The Emissary", these ships are used as sleeper ships, which could travel for decades with its crew in suspended animation. However, the class is equipped with both impulse engines and warp drive. The class is stated to have a crew of 800 and a length of 350 meters (1,150 ft.). The interior of the battlecruiser was designed by Douglas Trumbull, with the intent of appearing like "an enemy submarine in World War II that's been out at sea for too long". The K't'inga-class is used extensively throughout the Star Trek series, appearing from the first feature film in 2273 to the closing episodes of Deep Space Nine in 2375. A K't'inga model was used as an stand in for a 22nd century Klingon battlecruiser in Enterprise. The K'T'inga has often appeared as a ship of the line in battle scenes.
Posted by -Warren Zoell at 5:24 PM No comments: