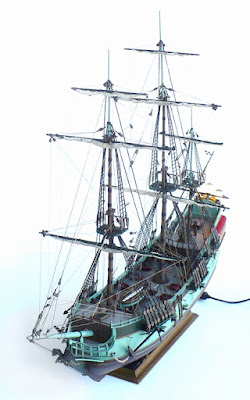 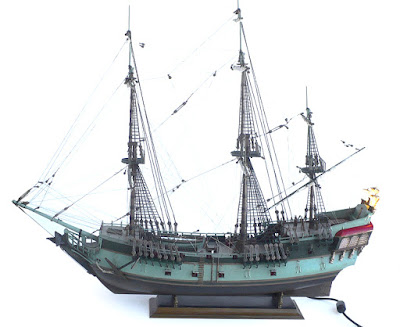 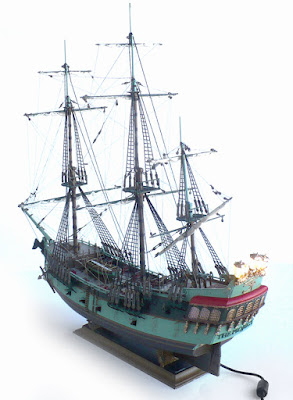 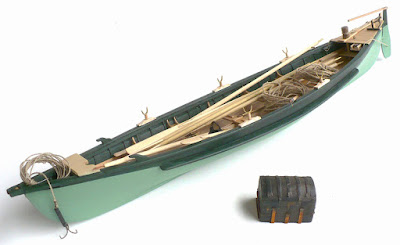 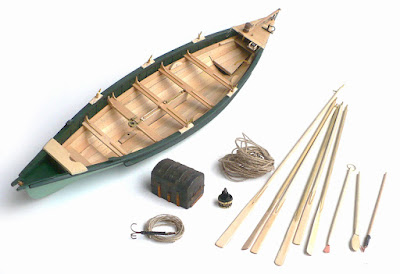 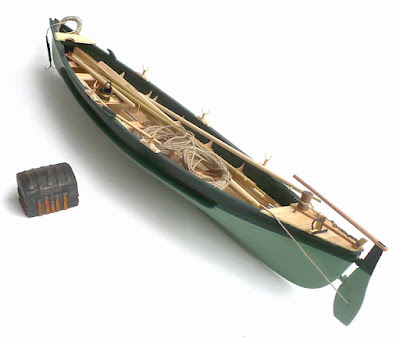 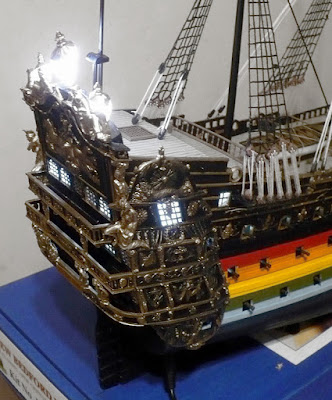 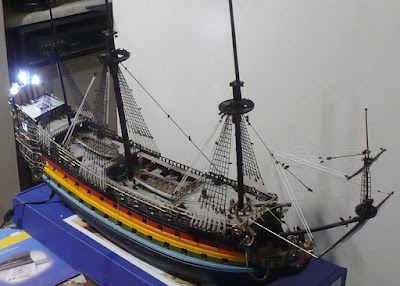 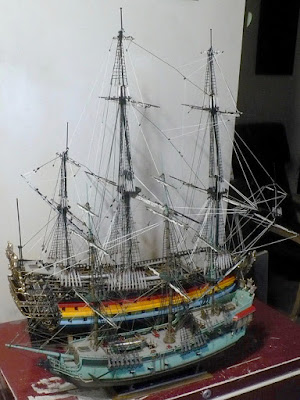 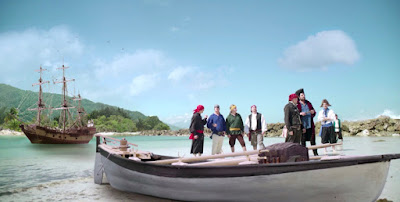 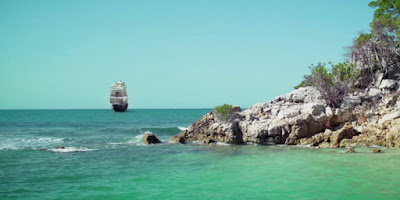 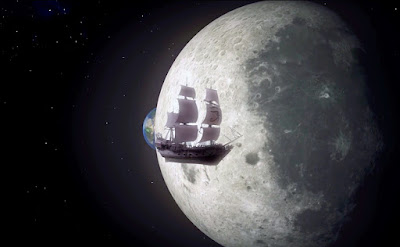 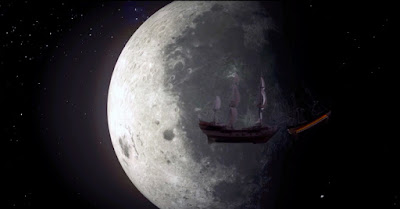 Here are some images of the models used in Alan Parsons latest music video "As Lights Fall" from his latest album "The Secret". An excellent song and album. I would highly suggest you pick this album up as soon as humanly possible before your money burns a hole in your pocket. You will not be disappointed... I'm serious! No seriously I'm serious! Stop laughing!!

First up we have the ship "The Project". This model started life as your standard Revell 1/72 scale Pirate Ship. The colour scheme used were based off of Alan Parsons best selling album "Eye in the Sky". Another album you should pick up if you don't own it already. The front figurehead was also converted from a swan to a Raven. Plus clothed furled sails were installed as well. unfurled sails were also made for this model as well. The fore top sail having the Eye of Horace motif. Plus one must not forget lights.

Next we have Model Shipways 1/16 scale New Bedford Whaleboat painted in the same style colour scheme as "The Project". A miniature treasure chest was also built for it.

Next up we have some images of another ship used in the video called "The Rose Floyd" (not Floyd Rose! - ;-}).  It was built from Heller's 1/100 scale Le Soleil Royal. Unfortunately I never had the time to take some decent pics of it when it was finished. So here are a couple of progress pics plus one of "The Rose Floyd" sitting next to "The Project". The Rose Floyd's appearance in the video isn't too long but important I think. It's painted to a Pink Floyd "The Dark Side of the Moon" motif. Plus lights.

After that we have some video stills of said boat and ships.

And finally the video.
Posted by -Warren Zoell at 5:27 PM 4 comments: 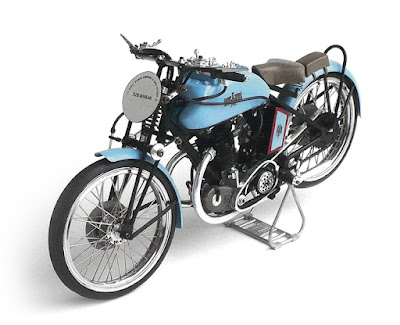 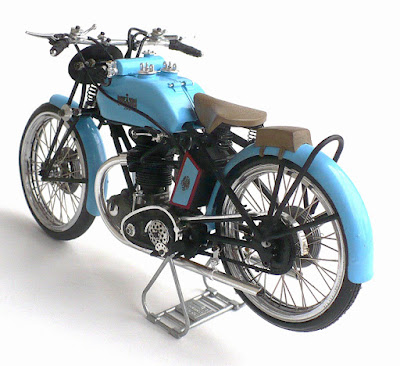 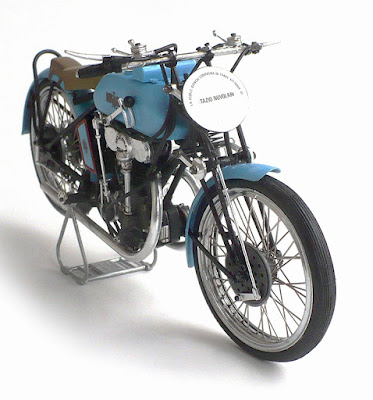 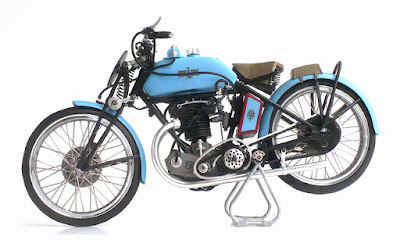 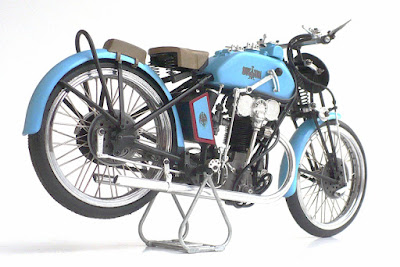 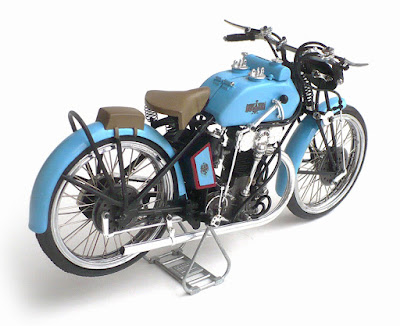 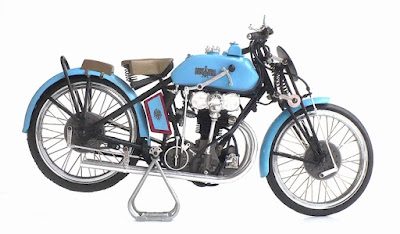 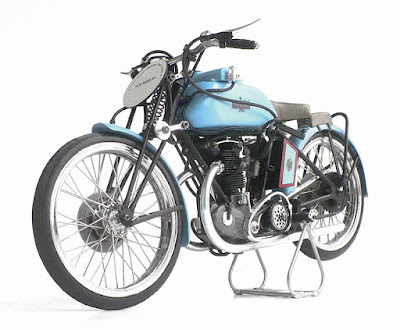 The main problem when building older kits is the frailty and brittleness of the metal and plastic
This kit was no exception. Though it's a beautiful kit I don't know if its problems were due to the way plastics and metals were made in the past or if it's just age. Needless to say it made for a more difficult build.

Truck from the movie Duel 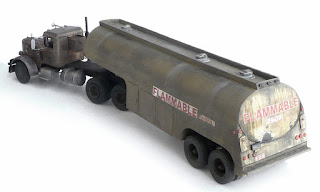 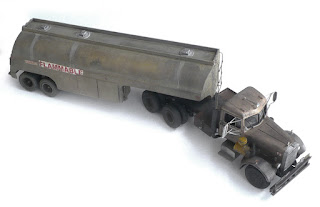 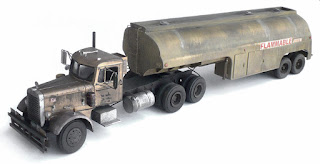 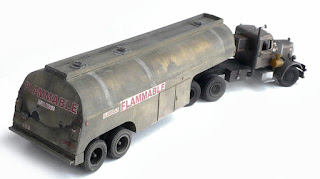 Here are some images of Revell/ MCA Truck Models/ Linderg 1/25 scale scratch'n'bash model of the truck and trailer from the movie Duel. Built for a client.
The main difference between this model and the previous Duel truck model (see here) is that in this case the body of a Peterbilt 280 was used instead of the Peterbilt 281 body. The 280 body has a more needle nose appearance giving it I think a more sinister look. But hey! Each to his own. The trailer was built in much the same manner as the trailer from the previous model.