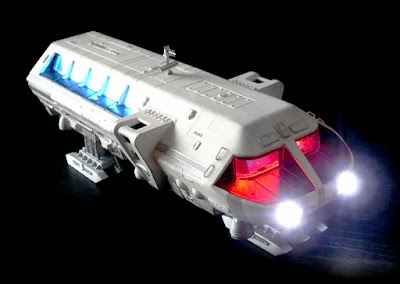 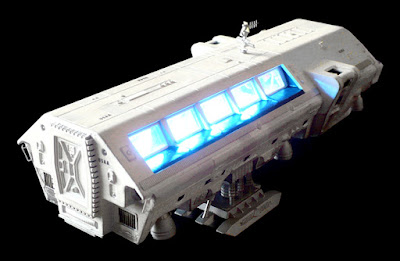 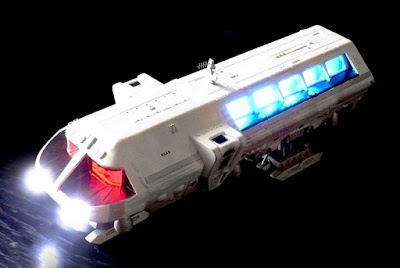 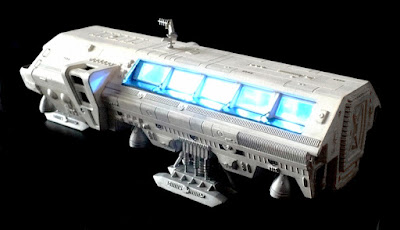 Here are some images of Mobius Models/Para Grafix/ Voodoo FX 1/55 scale Moonbus from the Movie 2001 a space odyssey.
I've built this model before, except now this one has the Para Grafix upgrade and the Voodoo FX lighting kit. The other edition that I added myself were the headlights.
Try as many might it is impossible to get this kit to be accurate to the filming miniature.
The filming model has a taller boxier appearance whereas the Mobius/Aurora kit has a lower racier appearance. The only way to fix this would be to create a new kit.

From Wikipedia"
The Moonbus is a fictional spacecraft from the movie 2001: A Space Odyssey. The vehicle is a small, low altitude rocket craft meant to be used for quick transportation of passengers and cargo above the surface of the Moon


Moonbus is a fictitious transportation vehicle which appears in the film 2001: A Space Odyssey. The word “moonbus” isn't referred to explicitly in the film itself; rather, it's called a “rocket bus” in dialogue, and, in an early draft of the screenplay, is described as a “moon rocket bus”.
A moonbus is a vehicle for transporting cargo and personnel across the surface of the Moon. Its mode of operation is to maintain a fixed cruising altitude by sustained downward thrust from a battery of rocket motors, exactly balancing the Moon's force of gravity. Horizontal motion is imparted by brief horizontal bursts of thrust. The Moon is airless. In the absence of aerodynamic drag, the vehicle continues to travel unimpeded as long as altitude above geographical obstacles is maintained.
In reality this scheme is possible, but also wasteful. Due to the Oberth effect, the more efficient use of propellant is to hurl the craft on a ballistic trajectory which intersects the lunar surface at the departure and destination points. Thrust would be exerted only during a boost phase at departure, and during approach to destination for a soft landing.
Posted by -Warren Zoell at 12:41 PM 4 comments: 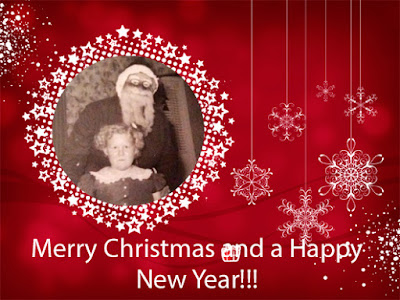 Merry Christmas and a Happy New Year everyone!
May you get that special kit or hobby supplies you've been wishing for.
Posted by -Warren Zoell at 9:05 PM 2 comments:

It was on this day nine years ago that I decided to start this blog. It's hard to believe I've built so many models. It's been a lot of fun and I have you to thank for it.
You may have noticed that I haven't built anything for awhile. This is because I've been suffering from model builders burnout and I've been taking a break. In the mean time I've been focusing on my LP collection and my stereo system upgrades. I'm trying to put together the best system I can using vintage components. One can build a pretty good system on the cheap when going vintage.
But not to worry. I'll be back building models again in no time.
Posted by -Warren Zoell at 12:14 AM 2 comments: