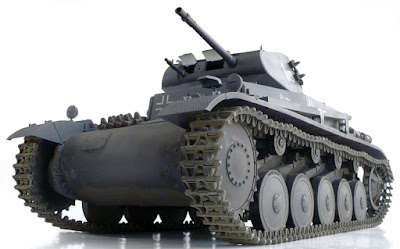 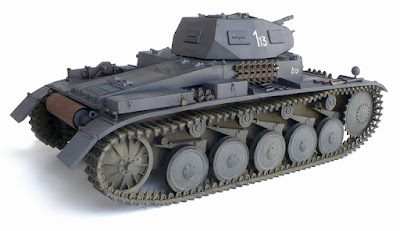 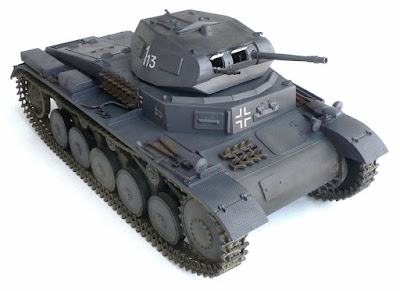 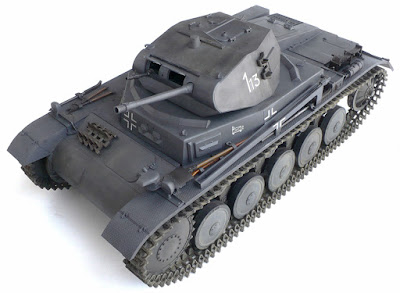 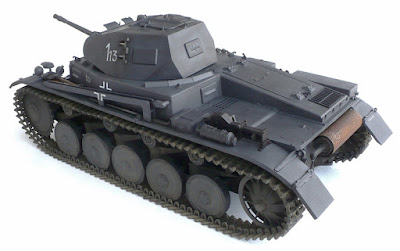 From Wikipedia"
The Panzer II is the common name used for a family of German tanks used in World War II. The official German designation was Panzerkampfwagen II (abbreviated PzKpfw II).
Although the vehicle had originally been designed as a stopgap while larger, more advanced tanks were developed, it nonetheless went on to play an important role in the early years of World War II, during the Polish and French campaigns. The Panzer II was the most numerous tank in the German Panzer divisions at the beginning of the war. It was used in both North Africa against the Western Allies and on the Eastern Front against the Soviet Union.
The Panzer II was supplanted by the Panzer III and IV medium tanks by 1940/1941. By the end of 1942, it had been largely removed from front line service and it was used for training and on secondary fronts. The turrets of the then-obsolete Panzer Is and Panzer IIs were reused as gun turrets on specially built defensive bunkers, particularly on the Atlantic Wall. Production of the tank itself ceased by January 1944, but its chassis remained in use as the basis of several other armoured vehicles, chiefly self-propelled artillery and tank destroyers such as the Wespe and Marder II respectively.

The first true production model, the Ausf. A, included an armour upgrade to 14.5 mm (0.57 in) on all sides, as well as a 14.5 mm floor plate, and an improved transmission. It entered production in July 1937 and was superseded by the Ausf. B in December 1937, which introduced only minimal changes.
A few minor changes were made in the Ausf. C version, which became the standard production model from June 1938 through April 1940. A total of 1,113 examples of Ausf. c, A, B, and C tanks were built from March 1937 through April 1940 by Alkett, FAMO, Daimler-Benz, Henschel, MAN, MIAG, and Wegmann. These models were almost identical and were used in service interchangeably. This was the most widespread tank version of the Panzer II. Earlier versions of Ausf. C have a rounded hull front, but many had additional armour plates bolted on the turret and hull front. Some were also retro-fitted with commander's cupolas.
Posted by -Warren Zoell at 2:15 PM 2 comments: