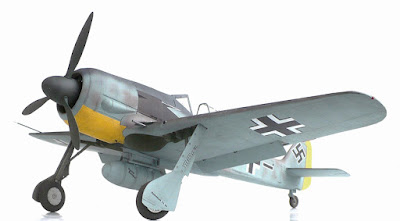 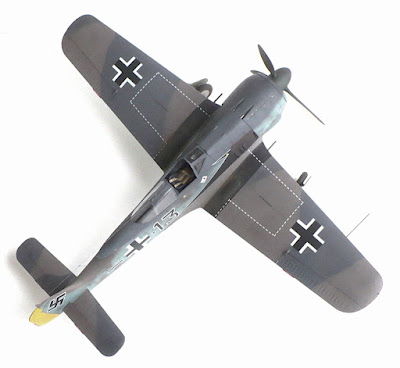 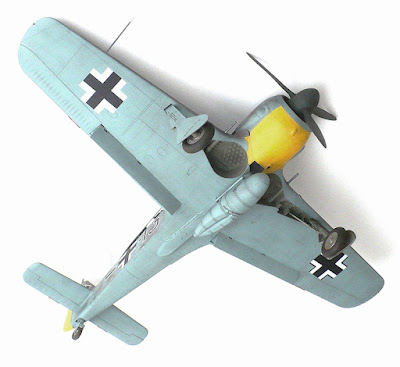 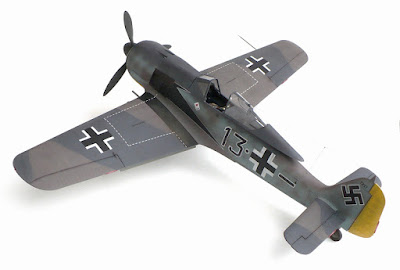 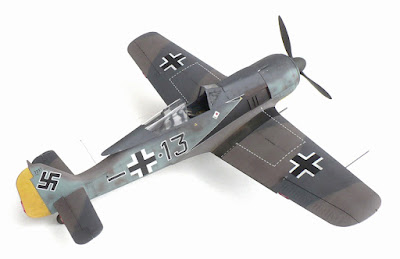 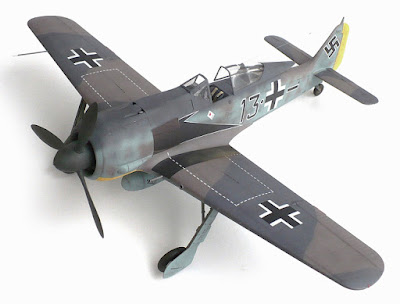 Here are some images of Hobby Boss's 1/18 scale Focke Wulf FW 190 A-5.
I strongly suspect while building this kit is that it's actually made from the molds of the old 21st Century Toys pre built planes from a few years ago.

From Wikipedia"
The Focke-Wulf Fw 190 Würger was used by the Luftwaffe during the Second World War in a variety of roles. Like the Messerschmitt Bf 109, the Fw 190 was employed as a "workhorse", and proved suitable for a wide variety of roles, including air superiority fighter, strike fighter, ground-attack aircraft, escort fighter, and operated with less success as a night fighter. It served on all the German fronts: Eastern Front, Western Front, North African Campaign and the Defence of the Reich.
When it was first introduced in August 1941, it quickly proved to be superior in all but turn radius to the Royal Air Force (RAF) front-line fighter, the Spitfire Mk. V variant.[1] The 190 wrested air superiority away from the RAF until the introduction of the vastly improved Spitfire Mk. IX in July 1942 restored qualitative parity. The Fw 190 made its air combat debut on the Eastern Front much later, in November/December 1942. The Fw 190 made a significant impact seeing service as a fighter and fighter-bomber. The fighter and its pilots proved just as capable as the Bf 109 in aerial combat, and in the opinion of German pilots who had flown both fighters, the Fw 190 presented increased firepower and manoeuvrability at low to medium altitude.
The Fw 190 became the backbone of Jagdwaffe (Fighter Force) along with the Bf 109. On the Eastern Front, owing to its versatility, the Fw 190 was used in Schlachtgeschwader (Attack Wings) which were specialised ground attack units. The units achieved much success against Soviet ground forces. As an interceptor, the Fw 190 underwent improvements to make it effective at high altitude, allowing the 190 to maintain relative parity with its Allied counterparts. The Fw 190A series' performance decreased at high altitudes (usually 6,000 m (20,000 ft) and above), which reduced its usefulness as a high-altitude fighter, but these complications were mostly rectified in later models, notably the Focke-Wulf Fw 190D variant, which was introduced in September 1944. In spite of its successes, it never entirely replaced the Bf 109. The Fw 190 was well liked by its pilots. Some of the Luftwaffe's most successful fighter aces flew the Fw 190, including Otto Kittel with 267 victories, Walter Nowotny with 258, and Erich Rudorffer with 222 claimed. A great many of their kills were claimed while flying the Fw 190.
Posted by -Warren Zoell at 4:49 PM No comments: