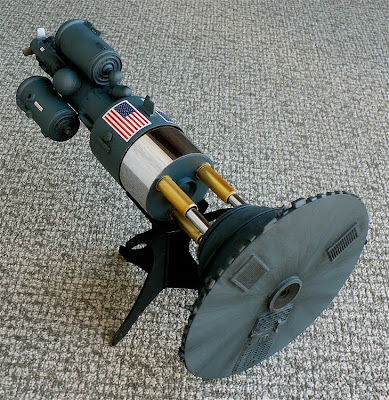 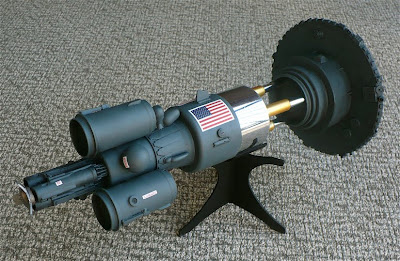 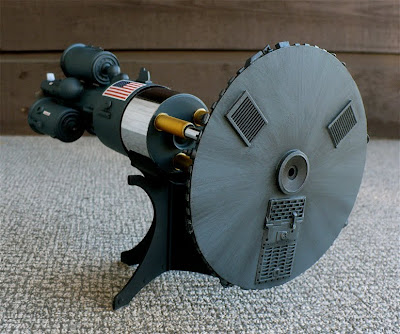 Here are some images of my scratch built Orion Nuclear Starship, based off off earlier drawings of the concept.

Project Orion was a study of a spacecraft intended to be directly propelled by a series of explosions of atomic bombs behind the craft (Nuclear pulse propulsion). Early versions of this vehicle were proposed to have taken off from the ground with significant associated nuclear fallout; later versions were presented for use only in space.

A 1955 Los Alamos Laboratory document states (without offering references) that general proposals were first made by Stanislaw Ulam in 1946, and that preliminary calculations were made by F. Reines and Ulam in a Los Alamos memorandum dated 1947. The actual project, initiated in 1958, was led by Ted Taylor at General Atomics and physicist Freeman Dyson, who at Taylor's request took a year away from the Institute for Advanced Study in Princeton to work on the project.

By using energetic nuclear power, the Orion concept offered high thrust and high specific impulse, or propellant efficiency, at the same time. As a qualitative comparison, traditional chemical rockets—such as the Saturn V that took the Apollo program to the Moon—produce high thrust with low specific impulse, whereas electric ion engines produce a small amount of thrust very efficiently. Orion would have offered performance greater than the most advanced conventional or nuclear rocket engines then under consideration. Supporters of Project Orion felt that it had potential for cheap interplanetary travel, but it lost political approval over concerns with fallout from its propulsion. The Partial Test Ban Treaty of 1963 is generally acknowledged to have ended the project.

The Orion nuclear pulse drive combines a very high exhaust velocity, from 20 to 30 km/s, with meganewtons of thrust. Many spacecraft propulsion drives can achieve one of these or the other, but nuclear pulse rockets are the only proposed technology that could potentially deliver both (see spacecraft propulsion for more speculative systems). Specific impulse measures how much thrust can be derived from a given mass of fuel, and is the standard figure of merit for rocketry.

Since weight is no limitation, an Orion craft can be extremely robust. An unmanned craft could tolerate very large accelerations, perhaps 100 g. A human-crewed Orion, however, must use some sort of damping system behind the pusher plate to smooth the instantaneous acceleration to a level that humans can comfortably withstand – typically about 2 to 4 g.

The high performance depends on the high exhaust velocity, in order to maximize the rocket's force for a given mass of propellant. The velocity of the plasma debris is proportional to the square root of the change in the temperature (Tc) of the nuclear fireball. Since fireballs routinely achieve ten million degrees Celsius or more in less than a millisecond, they create very high velocities. However, a practical design must also limit the destructive radius of the fireball. The diameter of the nuclear fireball is proportional to the square root of the bomb's explosive yield.

The shape of the bomb's reaction mass is critical to efficiency. The original project designed bombs with a reaction mass made of tungsten. The bomb's geometry and materials focused the X-rays and plasma from the core of nuclear explosive to hit the reaction mass. In effect each bomb would be a nuclear shaped charge.

where C0 is the collimation factor (what fraction of the explosion plasma debris will actually hit the impulse absorber plate when a pulse unit explodes), Ve is the nuclear pulse unit plasma debris velocity, and gn is the standard acceleration of gravity (9.81 m/s2; this factor is not necessary if Isp is measured in N·s/kg or m/s). A collimation factor of nearly 0.5 can be achieved by matching the diameter of the pusher plate to the diameter of the nuclear fireball created by the explosion of a nuclear pulse unit.

The smaller the bomb, the smaller each impulse will be, so the higher the rate of impulses and more than will be needed to achieve orbit. Smaller impulses also mean less g shock on the pusher plate and less need for damping to smooth out the acceleration.

The optimal Orion drive bomblet yield (for the human crewed 4,000 ton reference design) was calculated to be in the region of 0.15 KT, with approx 800 bombs needed to orbit and a bomb rate of approx 1 per second.

I knew a version apparently much bigger of the machine. I like military colors, nice work !

Thanks Pat - I had some dark blue grey left over from the Arizona so I decided to use it.

Wow. That is amazing. I'm obsessed with the Orions and doubt you'd ever sell that, but if you ever wanted to.. ;)