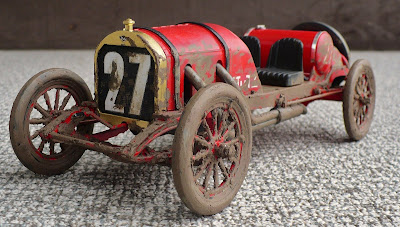 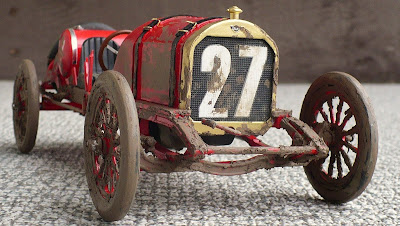 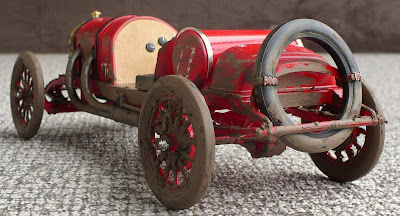 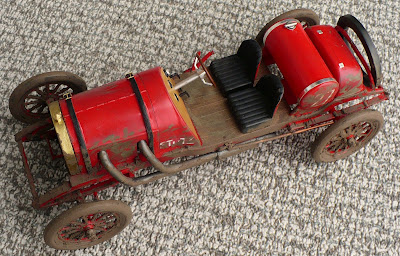 Here are some images of Lindberg Models 1/16 scale 1914 Stutz Racer. The one thing about model cars is that they should always be shiny and sparkling cl... Ahh to heck with it hand me that mud stick forth with!

The STuTZ Motor Company was founded as the Ideal Motor Car Company in Indianapolis, Indiana in 1911. Ideal entered a car in the Indianapolis 500 that year and placed 11th, earning it the slogan, "the car that made good in a day". The next year, the founder, Harry C. Stutz, renamed the company Stutz Motor Company and began selling high-performance roadsters like the famous Stutz Bearcat. The Bearcat featured a brawny 4-cylinder T-head engine with four valves per cylinder, one of the earliest multi-valve engines. Stutz has also been credited with the development of "the under-slung chassis", an invention that greatly enhanced the safety and cornering of motor vehicles and one that is still in use today.

Stutz was forced to raise money to fund his automobile production, eventually selling the company in 1919 after a falling out with the company's major stockholders, Allen Ryan, who then went bankrupt. In 1922, three Stutz investors, one of whom was Charles M. Schwab, gained control of the company. The new owners brought in Frederick Ewan Moskowics, formerly of Daimler, Marmon, and Franklin, in 1923. Moskowics quickly refocused the company as a developer of safety cars, a recurring theme in the auto industry. In the case of Stutz, the car featured safety glass, a low center of gravity for better handling, and a hill-holding transmission called "Noback". One notable advance was the 1931 DOHC 32-valve in-line 8 (designed by Fred Duesenberg), called the "DV32" (DV for 'dual valve'). This was during the so-called "cylinders race" of the early 1930s, when makers of expensive cars were rushing to produce multi-cylinder engines. While Stutz did not have the resources to design and tool a new engine, the DV32 was produced in larger numbers than any of its competitors, who were advertising 12- and 16-cylinder engines in their own cars.

In 1927, a Stutz set a world record for speed, averaging 68 mph (109.5 km/h) for 24 hours. The following year, a 4.9 litre (300ci) Stutz (entered and owned by French coachbuilder Charles Weymann) in the hands of by Robert Bloch and Edouard Brisson finished second at the 24 Hours of Le Mans (losing to the 4.5 litre {275ci} Bentley of Rubin and Barnato, despite losing top gear 90 minutes from the flag), the best result for an American car until 1966. That same year, development engineer and racing driver Frank Lockhart used a pair of supercharged 91ci (1.5 liter) DOHC engines in his Stutz Black Hawk Special streamliner LSR car, while Stutz set another speed record at Daytona, reaching 106.53 mph (171.3 km/h) in the hands of Gil Anderson. In 1929, three Stutzes, with bodies designed by Gordon Buehrig, built by Weymann's U.S. subsidiary, and powered by a 155hp (115kW) 322ci (5.3 liter) supercharged straight 8 ran at Le Mans, piloted by Edouard Brisson, George Eyston (of land speed racing fame), and co-drivers Philippe de Rothschild and Guy Bouriat; de Rothschild and Bouriat placed fifth after the other two cars fell out with split fuel tanks.

Production ended in 1935 after 35,000 cars had been manufactured. The former Indianapolis factory is today known as the Stutz Business Center and is home to more than eighty artists, sculptors, photographers, designers, architects, and craftsmen.

Wow! This is VERY realistic looking! Right down to the dirt...
Very nice!

Thanks Pat - These early Indi type cars did race in dirt and mud.