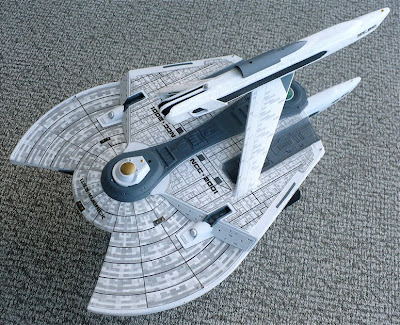 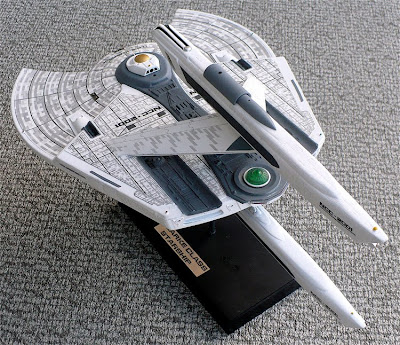 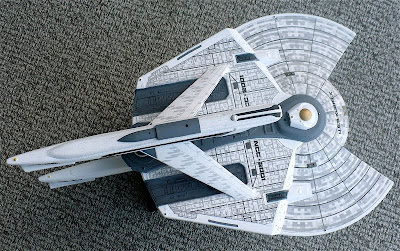 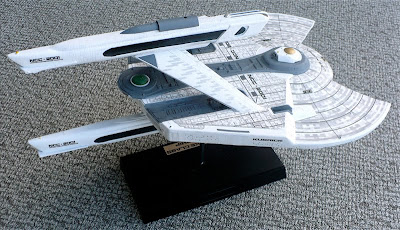 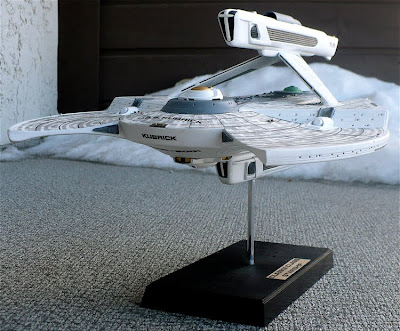 Here are some images of my 1/537 scale kitbash Clarke Class U.S.S. Kubrick NCC - 2001 in honor of a great film, a great writer and a great director.
18 months after the christening of the Kubrick she disappeared without a trace while investigating strange signals coming from the beta quadrant. It's whereabouts to this day still remains a total mystery ;).
Interestingly enough the next ship to bare the 2001 designation was the Excelsior Class U.S.S. Proxima.
She too was lost presumably to "unspecified aggressors" though this cannot be substantiated.

The specifications of the Clarke classes only member remains to this day classified.

I built this model using parts from the old AMT Enterprise and Reliant kits. As well as parts from my spares box
The Aztec decaling was downloaded from Starship Modelers web site.
Posted by -Warren Zoell at 1:40 PM

A nice tribute to a movie making legend.

Thanks Dave - Other guys have created U.S.S. Kubricks either in gaming or illustration. Let's hope mine sticks?

Go spacecraft library you should be unique

I meant I've never seen a collection like yours spacecraft

You mean you invented this? It's fantastic! Kubrick was amazing too, but I don't think I can watch "A Clockwork Orange." Great model yet again!

Thanks Hanny - It's called kitbashing where you take existing parts from other model kits and then reconfigure them to create something new.

You are really creative Warren! great job! Looks like a lot of detail work...

Thanks Pat - It seems to be attracting some attention.

I want to say that as a life-long Star Trek fan I've seen a lot of Kitbash ships that made no sense and had ot the feel of a real Federation vessel.

Yours, however, feels as though it would be perfectly happy on the silver screen near the Enterprise A.

I am a 3D Artist, and I would be honored if you would let me model your design - not for any sort of money or fortune of my own but just for the sheer joy of making tribute to such a wonderful ship.

If you wish feel free to email me.

Why thank you very much. Go right ahead. I can't wait to see the finished product when it's done.